High-profile businessman Ziggy Switkowski will step down as chancellor of RMIT university, days after facing calls to resign over his appointment as chairman at scandal-stricken casino giant Crown Resorts.

The Melbourne university released a statement on Tuesday confirming that the former Telstra and Optus boss would step down by the end of October to “focus upon his recently announced new board responsibilities”. 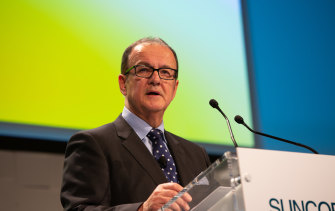 Ziggy Switkowski said he will step down as RMIT chancellor to focus on his new role at Crown.Credit:Attila Csaszar

The National Tertiary Education Union (NTEU), which represents university staff and academics, last week called for Dr Switkowski to resign, saying his appointment at Crown was inconsistent with RMIT’s values.

A union petition calling for his resignation said that Crown had “been shown time and again to be a socially destructive force”, making it untenable for Dr Switkowski to continue to lead the university.

RMIT did not say on Tuesday whether Dr Switkowski resigned due to a perceived conflict of values relating to his new position at Crown. The university council – its governing body – did not respond to The Age’s questions about the matter last week.

Dr Switkowski said in a statement on Tuesday that it had been a “pleasure and honour” to have been RMIT chancellor for the past eleven years and that he would leave with “a great sense of pride at what was achieved in that time”.

Crown appoint Dr Switkowski as its new chairman two weeks ago to replace former Howard government minister Helen Coonan, as it undergoes a major governance and management overhaul following years of high-profile scandals that have jeopardised the future of the $6.6 billion group.

Victoria’s royal commission into Crown’s flagship Melbourne casino will deliver its findings by October 15, after exposing a string of legal and ethical breaches including a cavalier approach to gambling harm.

The licence for Crown’s new Sydney casino is currently suspended after a public inquiry in NSW in February confirmed reports by this masthead that Crown had facilitated money laundering and had been infiltrated by organised crime syndicates. A separate royal commission into its Perth casino is underway in WA.

RMIT said it the university council was searching for a replacement for Dr Switkowski. Deputy chancellor Janet Latchford will act as chancellor if it has not appointed a permanent replacement by the end of October.