House Majority Whip James Clyburn (D-S.C.) is one of President-elect Joe Biden’s closest allies and the chairman of his inaugural committee. But after a violent mob swarmed the Capitol earlier this month, he’s not sure about one aspect of Biden’s swearing-in this week.

“I, for one, would much rather see [the swearing-in] done inside for security purposes ― in the rotunda, or in the hall of the House, for that matter,” Clyburn said during an appearance on MSNBC last week, referring to Biden’s decision to have a traditional swearing-in on the west front of the Capitol.

Clyburn isn’t alone. The events of Jan. 6, when President Donald Trump and his allies egged on rioters seeking to overturn the presidential election results, along with the failure of the Capitol Police and the rest of the federal government to adequately prepare, has many spooked about the possibility of further violent protesters or right-wing violence on Inauguration Day.

The inauguration has been held inside before, though that was for weather-related reasons. Biden’s team, however, plans to go forward with a fairly normal ― at least for the coronavirus era ― inauguration program and ceremony, both because of their confidence in the security planning for such a major event and because of the desire to send a message of resiliency to would-be insurrectionists. 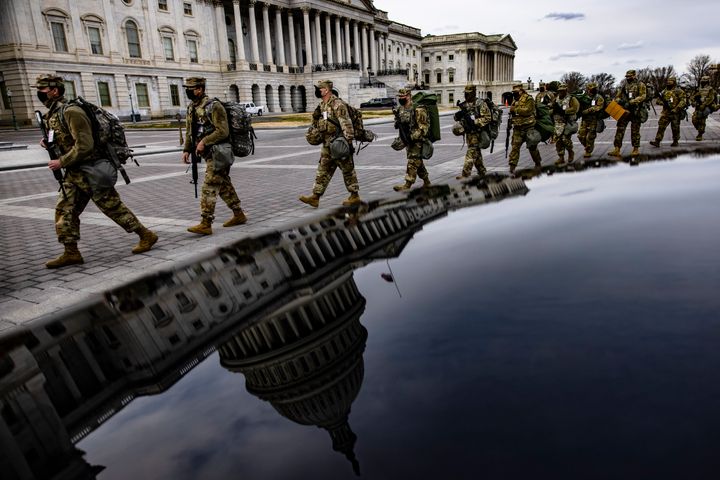 There have been some changes, and there is clearly heightened concern. A planned Amtrak trip to Washington by Biden, for instance, was scrapped. On Wednesday, the FBI and Secret Service teamed up with incoming members of Biden’s national security team to brief the president-elect on inaugural security.

“The team is engaging with the current administration to gain as much information as possible on the threat picture, and on the preparations being put in place to deter and defend against violent disruptions or attacks,” Biden’s transition team said in a statement. “The transition of power from one administration to another is a touchstone of American democracy. President-elect Biden’s team will be receiving daily briefings on the security and operational preparations to ensure the transition unfolds smoothly.”

And D.C. has been at least temporarily transformed by inauguration security: More than 20,000 National Guard troops are expected to arrive in Washington by Inauguration Day, along with police officers from as far away as New Orleans and San Francisco; streets through the Capitol Hill and downtown neighborhoods, including those around the National Mall, are closed; 13 of the area’s Metro stations closed late last week and won’t open until Friday; Airbnb has canceled all reservations in the area for the week, aiming to deprive would-be rioters of a place to stay.

The inauguration is what’s called a National Special Security Event, a designation indicating multiple federal agencies, led by the Secret Service, are working together to provide security. NSSEs are usually high-profile: think the presidential nominating conventions, the Super Bowl, the Olympics, or major international summits. Planning for NSSEs can begin more than a year in advance.

In other words, the failures that plagued Washington on Jan. 6, when the Capitol Police and Metropolitan Police Department seemed unprepared for the size and vehemence of the crowd, are almost unimaginable for an NSSE.

“The NSSE is about as close to a military deployment as you could get in the homeland,” said Juliette Kayyem, who served as an assistant secretary of homeland security in the Barack Obama administration, referring to how local, state and federal law enforcement will work together. “It’s a chain of command. NSSE means the Secret Service is in charge and everyone falls into line.”

In his MSNBC interview last week, Clyburn said he was confident the NSSE process would protect Biden and the inauguration.

“If he prefers to follow tradition here, I’m sure the men and women in uniform, the Washington, D.C., police force, the Capitol Police officers, they are going to do what they can to protect him,” he said. “And I really believe [we would have had] a different outcome last week if all of these entities had been engaged in a planning process as they are now.”

Beyond the suped-up security, holding an as-normal-as-possible event could discourage Trump loyalists who still believe the president’s “big lie” of widespread election fraud and hope he can win a second term.

“One of the reasons to have an outdoor event that at least has the visuals of the kind of event that the American public is used to is we need to start getting sharp breaks from the house of Trump,” Kayyem said. “If you’re like me, and believe he’s the leader of an operational and ideological domestic terrorism group, he has to be isolated and sharp breaks have to occur. And I can’t think of a better one than a not-hidden inauguration.”

“The more legitimacy that Biden shows each day, it doesn’t change their minds, but it takes some of that wind out of their sails,” she said.

As safe as the Capitol and main inauguration ceremony might be, widespread concerns remain about protests at state capitols. The FBI has warned of possible violence at all 50 state capitols. Some governors have called on National Guard troops to protect statehouses, and state legislatures across the country have shut down for the coming days.

Even Virtual Goods From China Are Taking a Hit From Coronavirus

Google Cloud boss is focused on growth: 'We need scale in order to be profitable'