The reelection campaign of Michigan Gov. Gretchen Whitmer is warning in a new fundraising letter that the Democrat faces a 2022 challenge from Republican Betsy DeVos, who served as U.S. education secretary under former President Trump.

But the Whitmer message “may be playing fast and loose with the truth,” one political watcher observed this week, because DeVos has made no public announcements about a gubernatorial run, the Detroit Free Press reported.

“DeVos is a threat to public education and the future of our state, and we need to be ready to counter her billionaire-funded campaign,” the Whitmer message warns about DeVos’s non-existent bid, according to the newspaper.

“This is clearly an example of what happens when our politics becomes laser-focused on raising the most amount of money possible, even if it may be playing fast and loose with the truth,” Schuster said.

“But Whitmer sure seems scared of it,” he added. 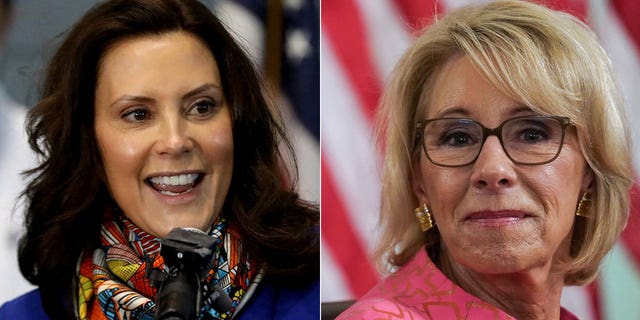 Deeper in the Whitmer letter, the Democrat’s campaign appears to acknowledge that a DeVos challenge is only hypothetical at this point, the Free Press notes.

“Should she enter the race, DeVos is poised to dump untold cash to not only win the governor’s mansion, but endanger school board races, state legislative races and more,” the letter warns.

Michigan Democrats may have become alarmed by a July radio interview of Dick DeVos, the secretary’s husband, who ran an unsuccessful campaign for governor in 2006.

Dick DeVos was asked if his wife might consider a run in 2022, to which he responded that Betsy DeVos would make “a fantastic governor.”

“The question is,” Dick DeVos added, according to the Free Press, “if she’s interested in being governor. That’s a question you’d have to ask her someday.”

Michigan law states that the maximum amount an individual donor can contribute to a gubernatorial campaign committee is $7,150. But Whitmer has been able to circumvent the legal limits due to a 1984 state ruling that says contribution limits don’t apply to governors – such as Whitmer – who are defending themselves against recall efforts.

DeVos vows to have schools open in fall: 'Kids have got to get back to school'