Australia's largest dedicated coal miner, Whitehaven Coal, believes shareholders are engaging in an "improved quality of discussion" about the role of higher-value coal in meeting the energy needs of developing Asian countries even as an investor decarbonisation push grows globally.

Thermal coal – the coal burned to create electricity – is the heaviest-polluting fuel and the focus of a rising tide of investor pressure due to concerns about its contribution to global warming. BlackRock, one of Whitehaven’s biggest shareholders, this year announced a partial retreat from its thermal coal investments as part of what it described as a climate-driven "reshaping of finance". 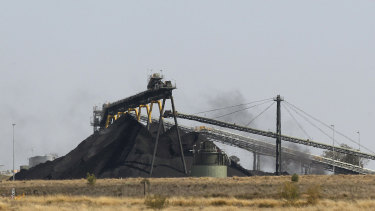 Whitehaven Coal’s production has been hit by bushfires, drought and a labour shortage. Credit:AP

Whitehaven chief executive Paul Flynn said the company was "very pleased" to have BlackRock on its register and engaged with the global fund manager on questions about coal emissions and climate change.

He said investors including BlackRock were demonstrating a recognition that Whitehaven's product – which has a higher quality and energy content compared to coal mined elsewhere – "plays an important role in emissions reduction commitments" set by its customer countries in Asia as part of the Paris climate accord.

"If you replace those brown coal-fired power stations in Victoria with the sort of technology that we service in Japan, you would get a 40 per cent emissions reduction," Mr Flynn said.

"Institutional ownership is at the highest that it’s ever been … and I think that's the improved quality of discussions we are having."

When asked about banks reducing lending to thermal coal producers, Mr Flynn said Whitehaven had "migrated more deeply" into the Japanese and Chinese banking market in recent years, signifying the company's close relationship with Asian customers. "What was six years ago, maybe 20 per cent of our facility was Asian banked, we are over half now," he said.

If you replace those brown coal-fired power stations in Victoria with the sort of technology that we service in Japan, you would get a 40 per cent emissions reduction.

His comments come as Whitehaven on Thursday revealed a 91 per cent decline in first-half profit due to weak thermal coal prices and production cuts, labour shortages, dust from the drought and bushfire smoke which have affected mining operations. Shares in Whitehaven hit a three-year low on Thursday to end the day down 5.51 per cent at $2.23.

Whitehaven said shareholders would receive an interim dividend of 1.5¢ a share, down from 20¢ a share last year.

In its latest sustainability report, Whitehaven said global consumption of thermal coal would fall as much as 4.5 per cent in the coming 20 years under the scenario whereby the world acts to limit global warming to two degrees above pre-industrial levels. But demand for Australian coal would not slump by as much, it said, due to developing countries in Asia which would seek coal with higher energy value and lower ash and sulphur content.

In Colorado, Progressives Had A Chance At Real Power. They Let It Go.