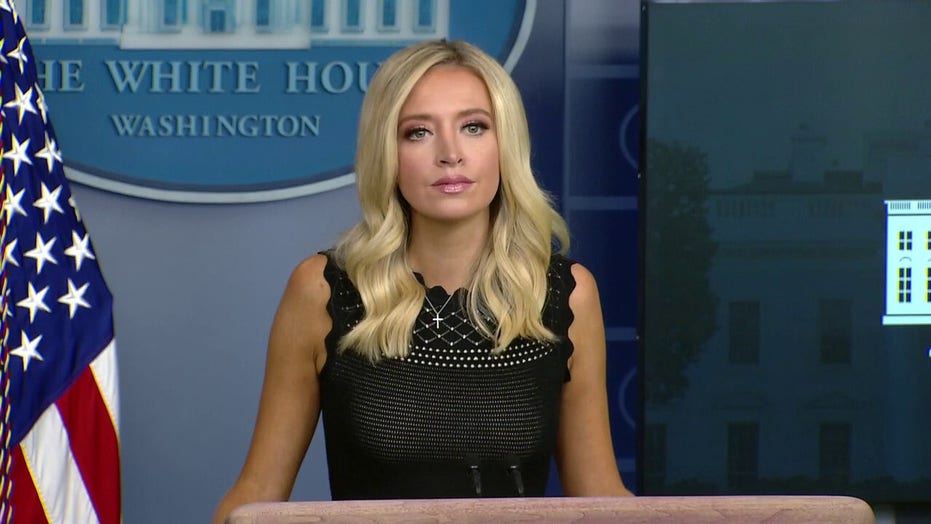 McEnany: The president will stand on the side of our children

Karl, who leads the White House Correspondents Association (WHCA), penned an op-ed in which he accused McEnany of giving partisan monologues and "denying reality" during press briefings.

"The job is to inform the public: to be an intermediary between the president and a press corps the public relies on for information … Denying reality and using the White House podium for purely political purposes is a violation of public trust," he wrote in The Washington Post.

He added: "Briefings under the current press secretary rarely last 30 minutes — which is short by traditional standards — but routinely include opening and closing messages that more closely resemble the monologues of a partisan political talk show than a public official’s briefing."

Karl specifically pointed to derisive statements McEnany made about Seattle's so-called autonomous zone, arguing she wrongly implied that President Trump liberated the city from its occupation.

"Seattle’s Democratic mayor ordered the removal of protesters, and its police chief oversaw the police action," he wrote in the opinion piece. "The federal government was not involved. But like so much else, this opening monologue wasn’t about briefing the media; it was about making a political point."

He was referring to a July 1 press briefing during which McEnany said that while Trump wasn't an elected official in Washington state, he "must lead by example and be prepared to act in the face of failed Democrat leadership, which is what we saw in Democrat Seattle and Democrat Wisconsin."

Like her predecessors, McEnany has had some testy moments with reporters and received conservatives' praise for confronting the media on hot button issues.

During her first briefing in May, McEnany pledged not to lie to the press corps. "I will never lie to you," McEnany told reporters. "You have my word on that." Her briefing marked the first time in over a year since the White House had last held a briefing — a point of longstanding contention among members of the press corps.

But McEnany has received criticism from The Washington Post's Paul Farhi, who previously described her performances and mic-drop moments as "political theater."

Karl also argued that McEnany fell short of her responsibilities as the president's representative. Specifically, he accused her of implying in a July 6 briefing that reporters didn't care about shootings in New York, as well as evading questions about the president's stance on NASCAR removing the Confederate flag from races.

The White House did not immediately respond to Fox News' request for comment.

"We have watched for the entire Trump presidency as the press has turned the briefings into a circus. That’s why the briefings went away, because journalists made a mockery of the interaction. Now we have a new press secretary who is showing up the most biased press America has ever seen and whiners like Karl can’t stand it," Gainor told Fox News.

He added that "[m]aybe if the news media decided to do their jobs in a professional manner, they wouldn’t need to be treated like spoiled children throwing a tantrum."

Vocal critics of the US pandemic response are emerging: central bankers

Latest Posts
FTSE 100 LIVE: US enters fourth week of losses as Asia sees tourism boom
Canada's pension fund plans to invest a third of funds in emerging markets by 2025. India is a major component
Trump paid little to no federal income taxes over several years as he piled up losses and debt, NYT reports
Trump Supreme Court pick Amy Coney Barrett faces 'White colonizer' attacks, other criticism from left, media
Timothy Head: Amy Coney Barrett – Supreme Court pick will bring this much-needed quality to the bench
Recent Posts
This website uses cookies to improve your user experience and to provide you with advertisements that are relevant to your interests. By continuing to browse the site you are agreeing to our use of cookies.Ok