One of the country's biggest landlords and owner of Westfield malls says there is no reason why some retail stores cannot reopen and urged clarity from the Prime Minister after "confusing messages" from the government.

Scentre Group chief executive Peter Allen said 86 per cent of the tenants in its Westfield mall portfolio were allowed to trade but of those only 39 per cent were open. 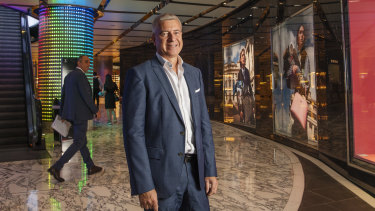 "It would help to get rid of this confusion, when you look at the categories that the government has said must close, such as gyms, nail bars and cinemas… that's only 14 per cent of our tenants so potentially a lot of other stores could open," Mr Allen said.

"Government is confusing in its messaging.. they say there are restrictions in moving around, yet the PM says jobs are essential. But the one clear message from the PM is that retailers must honour their leases."

Government is confusing in its messaging.. they say there are restrictions in moving around, yet the PM says jobs are essential.

"Some of our retailers have been required to close to meet government requirements and unfortunately some have voluntarily decided to close," Mr Allen said on a call after the group's annual general meeting.

"If you are a retailer and know you can get staffing costs paid through JobKeeper … and we are working with SME [small and medium enterprises] and bigger retailers.. it makes sense to me to open to keep staff employed and these businesses have the support of the banks.

"Money is a merry-go-round and retail is such a big part of the GDP."

On Tuesday the federal government introduced mandatory regulations for landlords to give rent relief for businesses with less than $50 million in turnover and rent reviews for others.

Mr Allen said his leasing team was talking to all 3600 tenants in its Westfield shopping centre portfolio and would assess each one on a case by case basis. He said he would not discuss lease agreements with dissident tenants, "through the press".

Last month retailer Solomon Lew, chairman of Premier Investments, which owns Smiggle and Portmans brands, said he would not pay rent during the shutdown.

In his address to the annual general meeting, Mr Allen said: "We continue to work our way through the economic shock with our retailers and their banks, in particular, our small to medium-sized retailers or ‘mum and dad’ retailers who are most vulnerable."

As a way to help tenants and keep sales ticking over, Scentre has bought forward the launch of Westfield direct, a drive-through service at the shopping centres to pick up goods bought online.

Tucker reveals the DNC party leaders don't want you to see, where extremism and anti-Americanism come out

Baidu has rallied 200% in the past year. Analysts bet it can keep going as it lists in Hong Kong