Germany’s Vice Chancellor Olaf Scholz has said the shared experience of battling the coronavirus could lead to a “new age of solidarity.”

There’s little sign of the crisis bringing nations closer together, though: From India to Europe and the U.S., governments are rushing to get hold of masks, ventilators, gloves and medicines in a free-for-all that’s stoking tensions in a world already stung by globalization. Countries are rushing to introduce export restrictions, contributing to what theWorld Trade Organization calls a “severe shortage” of goods needed to fight the virus.

“Understandably, governments are taking protective measures to stem the pandemic,” the WTOsaid in a report published on Friday. However, “some of these measures may inadvertently impact the flow of critical medical goods across territories.”

The tussles show just how vulnerable the world trade in medical supplies is to unilateral action by individual nations, and how dependent developing countries are on the richer world for basic medical gear to fight an epidemic. That’s all happening in a climate of distrust as President Donald Trump pushes his America First agenda, which has seen him frequently criticize global institutions as well as longstanding U.S. allies like Germany and France.

The wrangling also reflects the rising economic clout of Beijing and its entrenchment in global supply chains. China is either a provider of raw materials for medical equipment for many countries, or their main source of completed goods.

As the policy focus shifts to public health, the lack of control over supply chains translates into political pressure on governments. In India, the main opposition Congress Party berated Prime Minister Narendra Modi’s government for allowing the export of testing kits until Saturday, calling it “the ultimate betrayal to India.” 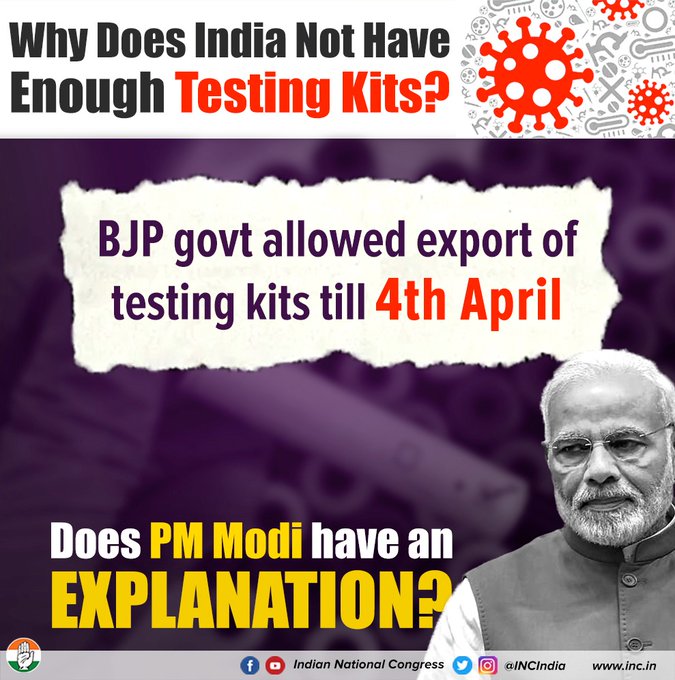 India also ran afoul of Trump at the weekend when itbanned all exports of hydroxychloroquine, a malaria drug the U.S. president has repeatedly championed in the fight against Covid-19. Trump said on Saturday that he spoke to Indian Prime Minister Narendra Modi to appeal for the release of shipments the U.S. has already ordered, and that India is giving his request “serious consideration.”

A major exporter of generic drugs, India had already restricted foreign sales of certain medicines and pharmaceutical ingredients in response to the coronavirus crisis. That’s raised concern in Europe.

The Indian export ban has been repeatedly discussed by the European Union’s Integrated Political Crisis Response mechanism, a group of experts and senior diplomats in Brussels seeking to coordinate the bloc’s policy, according to internal documents seen by Bloomberg. The EU’s executive arm has been negotiating with the government in New Delhi to ease the restrictions.

So far this year there have been 91 export curbs implemented by 69 jurisdictions, the “overwhelming majority” enacted in March as the virus epicenter shifted to Europe and then the U.S., according to Simon Evenett, professor of international trade and economics at the University of St. Gallen in Switzerland.

That is setting off international friction.

Officials in Germany and France have clashed with Washington over what they say are American attempts tounfairly obtain safety equipment.

The interior minister of Berlin city state, Andreas Geisel, blamed “the U.S.A.” for confiscating 200,000 masks ordered from a U.S. producer when they were in transit through Bangkok. “We view this as an act of modern piracy,” Geisel said.

French officials accused unidentified Americans of paying over the odds to secure masks in China that had been earmarked for France. The U.S. Embassy in Paris rejected any suggestion the federal government had been involved in such actions as “completely false.”

Also at the weekend, Spain accused Turkey of retaining a shipment of respirators bought by two regional Spanish governments from a Turkish company.

The Berlin official backed off his account on Saturday, saying on Twitter that the masks were ordered from a German company and why they didn’t reach Germany isbeing reviewed.

The crunch affects critical medical equipment worth about $597 billion in 2019, according to the WTO. The issue arises because not all countries produce the necessary goods, from hand soaps and sanitizers to syringes and protective glasses. One example: China, Germany and the U.S. export 40% of the world’s personal protective products. China, meanwhile, is the world’s biggest exporter of face masks, with a 25% share.

In a bid to ease the flow of imports, the European Commission on Friday waived tariffs and value-added tax on such medical gear until end-July. That reduces the price of masks in Italy by a third, said Commission President Ursula von der Leyen. “We stand by our health workers and hospitals and we will do all we can to help them further,” she said in avideo message.

The commission has sought to beginjoint procurement for various medical supplies while ramping up production of in Europe. Von der Leyen and Thierry Breton, the EU official responsible for the bloc’s internal market, held talks with industry representatives recently and concluded that boosting output under existing capacity was more feasible than retooling other manufacturing at the likes of auto and aerospace companies.

By contrast the U.S., the world’s largest importer of medical products for the last three years, has turned to carmakers such asGeneral Motors to produce ventilators during the crisis.

Trump, who has equated himself to a “wartime president” as virus cases spiked in the U.S., said on Friday that he’d invoked the Defense Production Act to ban the export of crucial medical supplies, including high-functioning respirators, surgical masks, gloves and other personal protection equipment. That flies in the face of a recent call by Group of 20 leaders to work together against Covid-19.

“We need these items immediately for domestic use, we have to have them,” Trump said.

In a March 26 statement following a special video conference, G-20 leaders including Trump vowed to “work to ensure the flow of vital medical supplies, critical agricultural products, and other goods and services across borders.”

Canada’s Prime Minister Justin Trudeau said Saturday he will speak to Trump in the coming days to point out that Canada also sends key equipment across the border.

The race for medical supplies marks a return to geopolitical tensions just months after the U.S. and China reached an initial deal to stave off a global trade war. At root, the political conflict over sourcing the equipment is an extension of trade policy.

“Governments have not aligned their trade and medical policy responses to coronavirus,” Evenett of St. Gallen said in a March report. That incoherence, he said, “threatens the lives of people at home and abroad, including those of front line professionals.”

— With assistance by Jonathan Stearns, and Nikos Chrysoloras