The $15 billion group on Thursday said it expected "subdued" patient volumes in 72 local hospitals and day surgery to continue, with the summer bushfires and spread of COVID-19 creating further uncertainty. 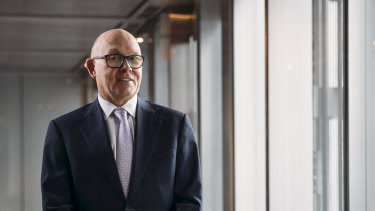 “How long is a piece of string?" said Ramsay's managing director Craig McNally when asked on Thursday how significant the impact of the health crisis could be.

"The two big potential impacts are that people start to defer elective work because they just don’t want to be around hospital environments or they don't want to be out in the community," he said.

“Then the second is potential disruption in the supply chain. You can assume there’s going to be some effect but it depends on the extent to which it escalates."

The company was also making “theoretical" plans to deal with the potential influx of coronavirus patients presenting to its emergency rooms, and how it could pick up urgent surgical work from public hospitals overrun with coronavirus cases.

We’re not putting more screws in people," he said. "I think there’s a lot of noise around prosthesis but that is just that: noise.

Australia could need 1.8 million hospital beds to treat people if there were an outbreak, according to according to Professor Raina MacIntyre, head of the Biosecurity Program at UNSW's Kirby Institute.

“We’re running all sorts of planning scenarios of different circumstance – all theoretical, and all without any current experience," Mr McNally said.

Ramsay revealed on Thursday that earnings from Australian hospitals grew 2.4 per cent in the 12 months to December 31, which is below the long-term average, and partially offset better performance in the hospitals it owns in the UK, Europe and Asia.

Mr McNally said the soft growth was partly a result of a softer economy prompting people to delay elective surgery and associated time off work, and a declining rate of private health insurance coverage.

Rates of private health insurance have been falling dramatically, especially among younger people concerned by rising premiums, with insurers themselves crying out for government intervention to stop their growing hospital bills.

But Mr McNally said insurers' claims, repeated as recently as last week by Medibank boss Craig Drummond, that the use of prostheses and medical devices was being deliberately increased in operating theatres to inflate profits were "naive" and a "furphy".

"We’re not putting more screws in people," he said. "I think there’s a lot of noise around prosthesis but that is just that: noise."

Ramsay reported statutory net profit after tax of $273 million for the six months to December 31, down 5.9 per cent. Excluding non-core items and changes to accounting standards, the profit result was a 3.4 per cent improvement on the same half last year.

Despite these headwinds, Ramsay reaffirmed full-year guidance of earnings per share growth of 2 to 4 per cent.