Just nine months ago, Masayoshi Son publicly declared Ritesh Agarwal one of the star entrepreneurs backed by his SoftBank Group. The Japanese billionaire boasted that Agarwal's Oyo Hotels & Homes was poised to overtake the biggest hotel chains in the world just a few years after its founding.

"It's unimaginable," Son said on stage at SoftBank World in Tokyo. "At 25, he's going to be world's biggest hotel king."

Today, Oyo is freezing operations around the world and furloughing thousands of employees as it struggles to survive the coronavirus pandemic. Travel has slammed to a halt, leaving hotel rooms empty and losses rising. 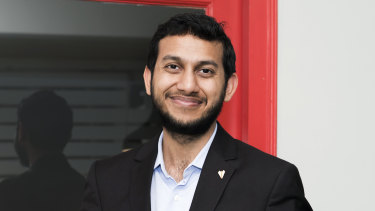 Ritesh Agarwal, 26, was being lauded as the world’s next “hotel king” before the pandemic hit. Credit:Bloomberg

Oyo risks turning into another problem startup for SoftBank and Son, still reeling from the meltdown at the shared-office company WeWork. SoftBank had booked profits on Oyo's rising valuation and may now be forced to take losses on the investment. The startup was valued last year at $US10 billion, one of the highest in SoftBank's portfolio.

The Oyo situation could prove particularly messy. In a highly unusual move, Agarwal, now 26, borrowed $US2 billion to buy shares in his own company as the valuation rose, and Son personally guaranteed the loans from financial institutions, including Mizuho Financial Group. Banks may ask for more collateral if Oyo's valuation drops, and the two men could face personal losses.

"Agarwal could be in trouble soon if he faces a margin call," said Justin Tang, head of Asian Research at United First Partners. "He might need to sell shares at a massive discount."

Son vowed after WeWork that he wouldn't bail out any more startups, but concerns have lingered and weighed on SoftBank's share price. Oyo would be complicated because Son's personal financial interests, as a guarantor of Agarwal's loans, would be somewhat different from SoftBank's. The Japanese company's board may ultimately have to get involved if SoftBank has to determine whether to rescue Oyo.

Agarwal, in a video last week, told employees that furloughs will keep jobs safe and help the business long term. Oyo has more than $US1 billion of cash in the bank and is exploring options to remain viable for at least the next 36 months, a person familiar with the matter has said.

Agarwal founded Oyo after travelling around India on a budget, seeing first-hand the opportunities in the industry. At 19, he set up a reservation website and began working with small hoteliers on service, design and standardised accoutrements like bedding and toiletries to draw more travellers. He took a 25 per cent cut of sales. 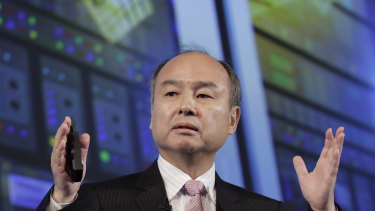 Masayoshi Son invested in Oyo in 2015, two years after the company was founded.Credit:Bloomberg

The concept was a hit in India. The reassurance of basic quality fostered trust with customers and brought in extra revenue. Enamoured of the idea and Agarwal, Son invested in 2015, two years after founding.

But as SoftBank started its $US100 billion Vision Fund in 2017, Son encouraged Agarwal to dream bigger. He put about $US1.5 billion into the company and suggested the young founder challenge the world's largest hotel operators. Getting to No. 1 by room count would have meant surpassing Marriott International, founded in 1927.

The business model that worked so well in India wasn't such an easy fit in markets like the US and Europe, with more established hotel chains. Yet Agarwal pushed ahead overseas, rapidly building teams around the globe and buying a few properties, including the Hooters Casino Hotel in Las Vegas.

The aggressive expansion proved particularly ill-fated as the coronavirus stopped most travel, first in China and then Europe, the US and the rest of Asia including India.

One way Oyo recruited hotel owners was by guaranteeing a minimum amount of revenue, essentially betting that its online booking system and brand name would draw enough extra business to bump sales. Instead, revenue plummeted and Oyo has had to pay hotel owners anyway.

"Oyo's problem is that they're not just an aggregator; they have minimum guarantees to pay — or they have to tell owners they cannot make those payments," said Satish Meena, senior forecast analyst at Forrester Research Inc. "The pandemic is coming in waves and that makes it even more difficult for them."

Oyo has recently pulled back on such guarantees.

For Son, Oyo risks dealing another blow to his reputation as a startup investor. For years, the Japanese billionaire could rely on his profitable telecom operation for stability and win renown for dabbling in venture capital, with a few enormous hits like Alibaba Group and Yahoo! Inc.

But with the Vision Fund, by far the largest fund of its kind ever, Son staked his reputation on his startup bets — and every setback is magnified by the billions invested and the antipathy of Silicon Valley rivals. While WeWork was the highest-profile misstep so far, Brandless has closed, Zume Pizza cut jobs and OneWeb just filed for bankruptcy. 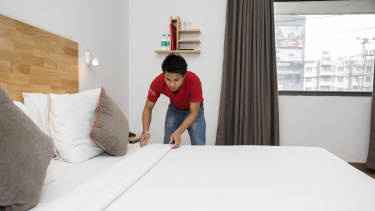 Oyo is freezing operations around the world and furloughing thousands of employees as it struggles to survive the coronavirus pandemic.Credit:Bloomberg

The wins and losses are uncomfortably visible each quarter with SoftBank's earnings. Early on, the Vision Fund reported a steady rise in the value of its startup holdings. Son would highlight them as evidence of the fortunes to come, though they were often profits only on paper – a practice criticised by accounting experts.

Oyo contributed to those apparent profits. The Vision Fund put $US250 million into the Indian firm in 2017 and led a $US1 billion funding round in 2018, pushing the Indian company's valuation to $US5 billion. Sequoia India and Airbnb also invested in Oyo.

Now, the Vision Fund has been reporting losses since the WeWork fiasco, contributing to the negative sentiment among SoftBank's investors. The fund lost about $US11 billion in the past two quarters. There may be more damage in the period ending in March as SoftBank reassesses the value of holdings from OneWeb to Oyo.

"They will have to revalue Oyo after such a crisis," said Forrester's Meena.

This 21-year-old is 'dripping in dropshipping money' and has already sold $1.7 million in products on Shopify this year. He shares his biggest tips for getting into e-commerce in 2020.