A push by two Virgin Australia bondholders to disrupt the bankrupt airline’s sale to Bain Capital has gained the support of investment giants including Credit Suisse, Deutsche Bank and UBS.

Documents filed on behalf of Broad Peak Investment Advisors and Tor Investments in the NSW Federal Court on Tuesday claim that bondholders, owed a combined $800 million, now back their alternative proposal for the airline. 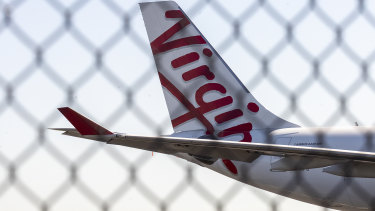 Bain says the alternative proposal put forward by bondholders is “not credible”. Credit:Getty

Virgin owes $2 billion to unsecured bondholders among a total debt pile of $6.8 billion. Broad Peak and Tor, which are Singapore and Hong Kong based investors owed around $300 million, want ownership of Virgin handed to creditors rather than the airline be sold to Bain.

Corrs Chambers Westgarth lawyer Cameron Cheetham, acting for the two investors, told the court that in the past week his firm had received statements of support for the rival proposal from around 60 bondholders including UBS, Credit Suisse, Deutsche Bank, Morgans, Mason Stevens, Escala Partners, Mutual Limited, Aberdeen Standard Investments and Yarra Capital Management.

"At present, I estimate that the combined holdings of the bondholders whom support the bondholder… proposal, together with the applicants, to be approximately $800 million," he said.

Mr Cheetham said aircraft lessors who own no fewer that 15 of Virgin's Boeing 737s have also contacted them to discuss the proposal.

The bondholders want the court to force Virgin's administrator Deloitte to put their rival plan to a vote at the airline's second creditors' meeting in September.

Deloitte, however, has said that the sale agreement it signed with Bain in late June is binding and is refusing to let creditors vote on the bondholder proposal.

Bain blasted the bondholder group earlier this week for trying to destabilise Virgin's future with a proposal that is "not credible… conditional, incomplete, indicative and non-binding".

Broad Peak and Tor have also asked the court to appoint an independent, third-party “facilitator” so they can access the company information needed to finalise their proposal.

The bondholder's application will be heard in court by Justice John Middleton on Monday.

Latest Posts
Flying to Hawaii? United Now Has a $250 Coronavirus Test for You
Nvidia's acquisition of Arm could be a 'nightmare' for China, CLSA says
Thanks to the Covid bailout, the stories of small business fraud keep rolling in
SNB Sticks With Interventions to Combat Highly Valued Franc
F-35s Lure Buyers as a Question Looms: How Will It Do in Combat?
Recent Posts
This website uses cookies to improve your user experience and to provide you with advertisements that are relevant to your interests. By continuing to browse the site you are agreeing to our use of cookies.Ok