Virgin Australia will make all pilots at its budget arm Tigerair redundant as part of a round of layoffs that will see more than 1000 workers lose their jobs in the wake of the coronavirus pandemic.

The airline on Wednesday stood down 8000 of its 10,000 workers as it slashed domestic flight capacity by 90 per cent. On Thursday, chief executive Paul Scurrah said more than 1000 of those workers would lose their jobs permanently. 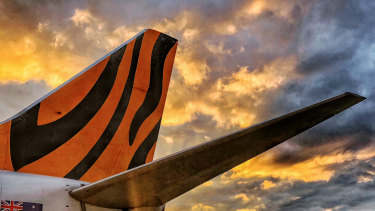 Virgin insists its low-cost subsidiary will continue to operate after the COVID-19 crisis passes, with plans to use a single workforce of pilots across both the Virgin and Tigerair fleets. Credit:Paul Rovere

The Australian Federation of Air Pilots said all 220 pilots at Tigerair had been told they would lose their jobs at the end of April.

“It is disappointing that while Virgin is trying to reassure the travelling public that it will maintain a low-cost carrier, it is dismissing all of Tigerair’s pilots at the same time," AFAP industrial officer James Lauchland said.

Virgin insists its low-cost subsidiary will continue to operate after the COVID-19 crisis passes, with plans to use a single workforce of pilots across both Virgin and Tigerair.

The redundancies are likely to include about 500 pilot and cabin crew roles at Virgin's New Zealand base, which the company plans to close.

"The COVID-19 pandemic has required the group to evaluate its operating model for its Boeing 737 flying, to ensure we are operating as efficiently as possible once the crisis is over," a Virgin spokeswoman said.

"We are consulting with the unions on a proposal to have all future domestic and short haul flying operated by Virgin Australia Group pilots, including Tigerair services."

The 1000 redundancies are in addition to 750 layoffs announced late last year as part of a restructure designed to lift Virgin's poor financial performance.

The unions representing Qantas and Virgin pilots and engineers wrote to federal Transport Minister Michael McCormack on Wednesday, calling for support for workers to be included in any further industry assistance. 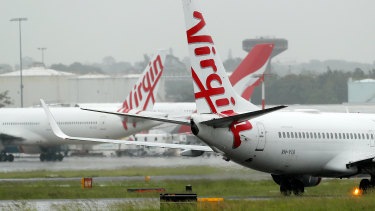 A lot of the staff Virgin Australia stood down earlier this week will be made redundant, the airline says. Credit:Bloomberg

A $715 million industry assistance package announced last week had not been passed on to workers, the unions said, with stood-down employees either having to use annual leave or unpaid leave.

"The industry needs more government support to ensure it survives this downturn," the unions said.

"What we are asking is that when further aviation support packages are considered, ongoing wage relief be a key element. Australia cannot afford to lose qualified aviation professionals who will play a vital role in relaunching the industry when the COVID-19 downturn ends."

The Transport Workers Union, which represents baggage handlers and ground crew, said the government should step in to pay up to 80 per cent of the wages of stood down airline workers. The British government has launched a similar policy.

The TWU criticised Virgin for standing down staff but noted that unlike Qantas, it had agreed to discuss compensation when the crisis passed.

UFO reality no longer a question, it's a question of what they are: filmmaker

New York City's MTA says it was hacked in April