Clear as mud. It’s the most appropriate description of Crown Resorts' earnings prospects for the half-year to June 2020.

Sure Crown hails its recent epiphany on corporate governance as a breakthrough in its quest to be more responsive to its major shareholders so how about Crown joins the disclosure party.

I’ll bet those shareholders would have been even more grateful for some kind of guidance on the performance of its major casino properties in the months since the coronavirus hit in January. 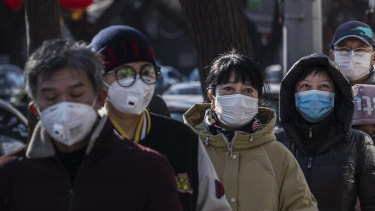 The ban on inbound travel from China has been extended.Credit:Getty Images

Instead, we have been told that Crown is watching the virus closely and that conditions have been "softer".

"Crown has recently experienced softer trading conditions as a result of travel restrictions and general community uncertainty in response to COVID-19, particularly over the Lunar New Year period," it said in a statement to investors.

Without a crystal ball, Crown has no idea when coronavirus containment may be declared so when (or to what extent) its Chinese customers and those from other Asian nations might return to Australian gaming tables.

But it will know plenty about visitor numbers, revenue and earnings from January to mid-February and will have visibility on forward bookings until the end of March.

There are plenty of other companies whose revenue and earnings are arguably less sensitive to the viral epidemic but have updated their investors.

Even shopping mall giant Vicinity Centres put a number around a coronavirus related downgrade on Wednesday.

Similarly, logistics software group WiseTech took a small axe to its revenue guidance for full year. Again this was related to the deadly virus.

Vitamin maker Blackmores, cruise operator Carnival Corp and bionic ear maker Cochlear all kept investors in the loop over the past week – and that’s not a comprehensive list. And as profit season progresses the list will get longer.

No doubt Crown will say its disclosure adheres to the rules.

But here is what we do know about Crown’s performance before the outbreak. In the six months to December 2019 its VIP turnover had fallen by more than a third and its normalised net profit across all operations was down 11 per cent.

In large part the slump in VIP performance, which is also below analyst expectations, has been attributed to the negative media publicity surrounding its use of junket operators with links to organised crime.

But Crown, whose controlling shareholder is James Packer, did catch an extraordinary break.

Its actual statutory earnings were well in excess of the "normalised" earnings – which is the number investors focus on.

Normalised earnings are arrived at after applying a theoretical win rate to turnover – this removes the luck element (which can cause wild swings to revenue and profits).

In Crown Melbourne’s case, it experienced a win rate of 2.3 per cent compared against the theoretical win rate of 1.35 per cent. The actual win rate during the six months to December 2018 was 1.02 per cent.

Translated into dollars and cents – “Normalised VIP program play revenue was $140.9 million, down 39.6 per cent on the previous corresponding period with turnover of $10.4 billion.

"Actual VIP program play revenue was $239.6 million, up 39.8 per cent on the previous corresponding period."

Normalised earnings before interest tax and depreciation and amortisation for the Melbourne casino was down 14.7 per cent but the actual EBITDA was up almost 23 per cent.

This suggests the Melbourne casino did well in the six months to December 2019 but the punters didn’t.

Meanwhile, in the absence of any meaningful update on the international VIP market Crown’s share price see-sawed throughout the day.

Latest Posts
Trump stumping in Pennsylvania in presidential campaign's final week
Oxford-AstraZeneca coronavirus vaccine triggers immune response among adults
Apple Developing Smaller AirPods Pro, Revamped Entry-Level Model
State pension: Some claimants may qualify for Cold Weather Payments which start from next
10 things in tech you need to know today
Recent Posts
This website uses cookies to improve your user experience and to provide you with advertisements that are relevant to your interests. By continuing to browse the site you are agreeing to our use of cookies.Ok