‘Modern Warriors’ hosted by Pete Hegseth returns with a new episode in honor of Veterans Day.

Fox Nation’s “Modern Warriors” returned on Tuesday with a new episode that chronicles the sacrifices and personal accounts of decorated Vietnam veterans who dedicated their lives to service on behalf of the United States.

The episode release comes as Fox Nation dedicates November’s content to honoring those who’ve served as part of the platform’s “Patriot’s Month” initiative in commemoration of Veterans Day.

James McCloughan, an Army medic who was awarded the Medal of Honor by former President Trump for rescuing wounded soldiers during the war, joined host Pete Hegseth in the episode along with several other veterans to detail their experience abroad and the hardships they faced upon their return to the U.S.

“Vietnam veterans didn’t talk about their war and about themselves,” McCloughan recalls in the episode. “They were very humble individuals for two reasons. One, it was hard to go there again. You kind of like to in the back of your head and hope it would go away. And number two, they probably wouldn’t believe you anyway if you told them what you saw, and what you experienced.” 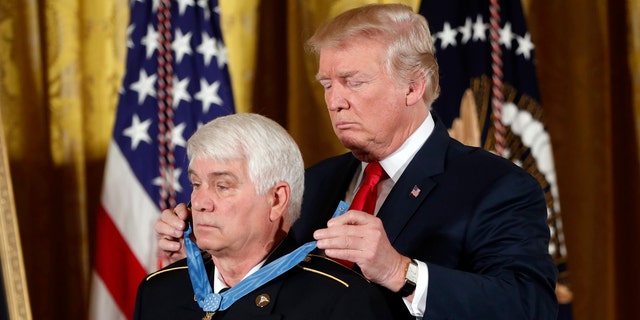 President Donald Trump bestows the nation’s highest military honor, the Medal of Honor to retired Army medic James McCloughan during a ceremony in the East Room of the White House in Washington, Monday, July 31, 2017. McCloughan is credited with saving the lives of members of his platoon nearly 50 years ago in the Battle of Nui Yon Hill in Vietnam. (AP Photo/Pablo Martinez Monsivais)
(AP Photo/Pablo Martinez Monsivais)

In the episode, the former service members recount harrowing scenes that stayed with them from their time abroad, but it was the return home for many of them that left them feeling wounded and betrayed.

“When we came home, some of us were spit at. You couldn’t even get back into the workforce,” Joe Rosato, author and Navy Veteran told Hegseth. “Corporate America wouldn’t hire us. They had an impression that we were baby killers and drug addicts.”

“The perception was that you were either mentally unstable, or you were on some kind of a drug,”  Louis Vlahakes, NJ Vietnam Veterans Memorial Trustee recounted, “and that was the beginning of the acknowledgment of what society had expected when we came home.”

To hear the heartwrenching and inspiring accounts of the decorated veterans featured in the new episode of “Modern Warriors,” join Fox Nation and watch it today.