Twitter is testing adding brightly coloured labels underneath tweets posted by politicians and public figures that contain lies and misinformation.

The company told Reuters on Thursday that a leaked demo version was one possible iteration of a new approach to combat misinformation. NBC News earlier reported that Twitter company documents showing a mockup were accessible on a publicly available site, although it did not identify the site.

Disinformation or misleading information posted by public figures would be corrected directly beneath the tweet by fact-checkers and journalists verified on the platform, and possibly other users who would participate in a new “community reports” feature similar to Wikipedia, the NBC report said.

The mockup showed "bright red and orange badges for tweets that habe been deemed 'harmfully misleading'" that were almost as big as the offending tweets themselves, according to the report. 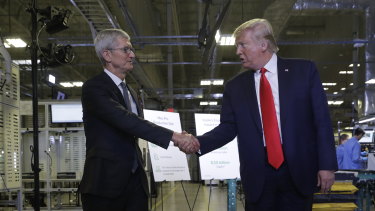 Donald Trump tweeted in November he had opened a new Apple plant in Texas to bring jobs back to America. The plant had been making Apple products since 2012. The new warning badges would highlight such tweets.Credit:AP

"We're exploring a number of ways to address misinformation and provide more context for Tweets on Twitter," Twitter said in a statement.

"This is a design mockup for one option that would involve community feedback. Misinformation is a critical issue and we will be testing many different ways to address it."

Twitter said earlier this month that it would apply "false" warning labels to tweets containing synthetic or deceptively edited forms of media and remove such media if it is likely to cause harm.