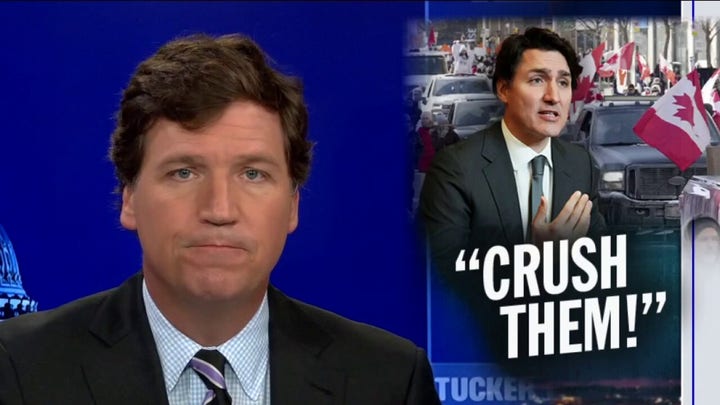 We’ve been covering this truck strike in Canada all week and at the end of the week there were a couple of different images that kind of floated around your head. Picture the cops stealing the fuel from the freezing truckers. Picture the smiling trucker talking about love and waving the Canadian flag. Totally non-threatening. But above all, you remember the hysteria of the people in charge as they look out on the sea of working-class people who are sick of being pushed around. The people in charge are extremely upset about this. Hysterical. It’s hilarious. You can just picture a transportation secretary, little Pete Buttigieg jumping up and down, shaking his little hands, screaming at the truck drivers, get off my bridge, you guys, get off my bridge right now!

It’s not just Mayor Pete, you remember those angry tweets from the CNN contributor who suggested we should slash their tires, siphon their diesel fuel, throw them in prison. They’re all Torquemada now. They are talking like they are scary. But keep in mind, these are not displays of power. This is not how confident people talk. These are squeaks of impotence. Our leaders are furious at the truckers because they know that there’s not a lot they can do about the truckers. They don’t know anything about trucks, for one thing. How do you get a truck off a bridge, especially when it has no fuel or tires? They have no idea You just order someone to do it. It’s kind of like an Uber eats. Some guy trots out and removes the truck. The problem is, the people who drive the trucks don’t feel like following orders anymore. They are ignoring Pete Buttigieg.

If you actually want to move a big rig, you need tow truck operators. And those tow truck operators know truckers. They know truckers are not a racist. They are not Nazi’s no matter how many times Joe Biden and Justin Trudeau claim they are. So some of them aren’t inclined to help. David Allen, for example, is the president of Gary’s Towing in Thunder Bay, Ontario. He told Canadian media “we have all the capabilities on our tow trucks to do it, but I don’t think anyone would want to.” Another tow truck operator said even if tow truck operators wanted to help, carry out Pete Buttigieg’s orders it would be very hard, “In the end, the truckers get a say on whether you are taking that truck away or not.” There are technical reasons for this, it turns out trucks are heavy. They have air brakes and steel-belted tires. Some truckers removed their tires completely. So what now? Now is when you start to panic. And they definitely are. This afternoon the Prime Minister of Canada clearly who is Fidel Castro’s illegitimate son, came out from hiding to threaten the protesters directly. 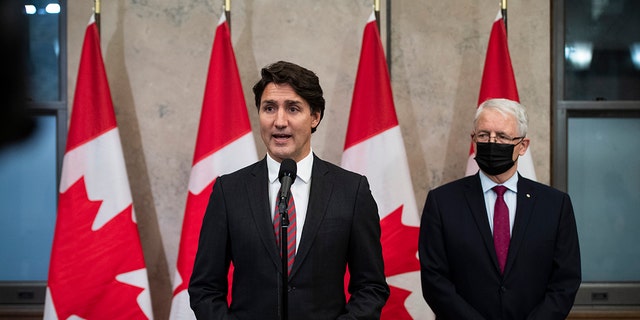 JUSTIN TRUDEAU: If you join the protests because you are tired of COVID, you now need to understand that to you are breaking laws. The consequences are becoming more and more severe. You don’t want to end up losing your license, end up with a criminal record, which will impact your job, your livelihood, even your ability to travel internationally including to the U.S.

You could be breaking laws! That’s the funniest part. These people don’t care about the law at all. They believe they make the law. This is the prime minister who ordered the cops to steal people’s fuel. There is no law that says you can’t have fuel in Ottawa. He just made that up. Now he’s lecturing about the law. Joe Biden who was violating federal law on the grand scale every day by importing two million people illegally without your consent, he’s upset about the law. Justin Trudeau is so upset he is threatening the truckers’ children. “It’s time to go home especially if you have your kids with you,” Trudeau said. Wouldn’t want something to happen to them.

Trudeau also attacked the protesters for closing the border. Only Justin Trudeau is allowed to do that. Which he has done for more than a year. So what are we watching here? It’s more than hypocrisy. What we are watching is panic. Justin Trudeau knows that nobody joined the protest because they are “tired of COVID.” They are tired of tyranny. They are tired of being told to inject something into their bodies they don’t want, whose long-term effects cannot be known. Sold by companies that are protected, that have immunity from public recourse.

We also know that what they told us to do didn’t work. The lockdowns didn’t work. Johns Hopkins came out and said it the other day. Pretty conclusively. That is what people are mad about. They want their freedom back. They are not tired of the virus, they are tired of the leaders who have used the virus to give themselves more power. And they’re still doing it. Here is Ontario’s premier Doug Ford. He announced today that instead of lifting his useless mandates, he’s going to steal the truckers money, fine them, and send them to jail. 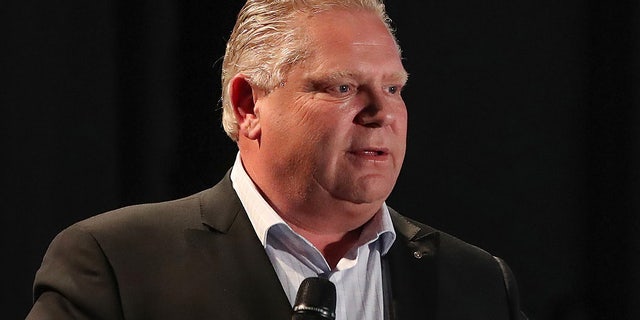 DOUG FORD: There will be consequences for these actions. And they will be severe. We’ve already started by going after the money funding the illegal occupation. Yesterday an Ontario court granted our request to freeze the funds from GiveSendGo for the convoy. Fines for non–compliance will be severe with a maximum penalty of $100,000 and up to a year imprisonment. We will also provide additional authority to consider taking away the personal and commercial licenses of anyone who doesn’t comply with these orders.

When you start making threats like that, you’ve already lost. What you are showing is that you are impotent and that is why you are unreasonable. That is why you are hysterical. When you start stealing things from people, outside of the law, speaking of the law, everybody knows you are weak. Keep in mind that truckers raise $10 million on GoFundMe, that’s a California company, but Canadian politicians had that effort shut down. Then GiveSendGo, a Delaware company, raised almost the same amount and Canadian politicians went after that money too. The attorney general of Ontario successfully got a court order to freeze access to the 8.4 million raised on GiveSendGo. Those funds were going to an adopted trucker fundraising campaign who is paying for “housing, water, food, accommodations, and shuttle services” for truck drivers in Ottowa. But all that money has just been stolen by the Canadian government. It has been seized.

All of this is pushing people away from government–issued currencies because they’re controlled by lunatics like Ford. They are moving towards cryptocurrencies like bitcoin. Just like 18 wheelers on bridges, blockchain is pretty tough for authorities to control. Therefore, this is how you know it’s a threat: The crypto guys must be White supremacists. That is exactly what they are not telling us.

CNBC WORLD REPORTER: It is an avenue not just to make a lot of money, but it is also an avenue for money laundering and it is also a place where White supremacists apparently are taking options. It is problematic at best in so many ways.

“It’s problematic at best.” How do people like that get on television? There should be an IQ requirement. By putting dumb people in the anchor chair, they are perfectly compliant to the people in charge. “Crypto is White supremacy.” But the hysteria gives them away. As a trucker explained, these people are terrified, they are scared of losing control. The blockade at the Windsor Bridge panicked them. 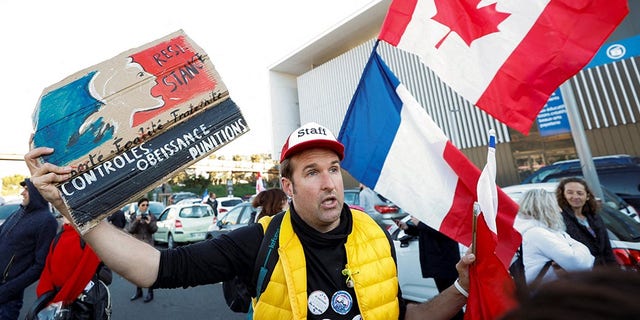 TRUCK DRIVER: They block the Ambassador Bridge. That is the busiest border crossing in between Canada and the USA. Most trade goes through that port. So it’s hidden up good, you know?

The downside of all of this is it’s turning Canada into a legitimate police state, for real. One of Doug Ford’s police officers harassed a woman at her home because of something she wrote on Facebook in support of the truckers.

ONTARIO POLICE OFFICER: This is some information about peaceful protesting, that’s all it is.

RESIDENT: So the Ontario provincial police are watching what people are doing on Facebook and different groups whether or not they are commenting, participating, liking. And you are now doing service calls to get people information about peaceful protest?

ONTARIO POLICE OFFICER: It’s a proactive measure to make sure you understand your rights about peaceful protesting.

In 2022, the Stasi are chirpy. We are here is a proactive measure to inform you of your rights, not because we are spying on your social media. So to recap, donating to the truckers is criminal. Saying anything positive about the truckers gets the police to show up at your house. That is why truckers are the new QAnon, Russia, White supremacist, extremist threat. Our leaders agree. In Michigan dopey old Gretchen Whitmer is planning to attack them with bulldozers.

BRIANNA KEILAR: Do police need to begin arresting people in the blockade?

GRETCHEN WHITMER: I’m not going to weigh into how they proceed. I will tell you right now, they have to get it done. Using whatever tool it takes to safely and swiftly and this is what we are calling on them to do.

BRIANNA KEILAR: Trucker-inspired protest in the U.S., potentially in your state, would you forcibly clear people?

GRETCHEN WHITMER: If people are breaking the law, obviously we will assess it at the time, but we are working very closely with our federal partners. The fact of the matter is we will do everything we can to prevent that from happening in the first place.

Working closely with our federal partners. Keep in mind, they’re not talking about ISIS, these are truck drivers, the people who bring you food. They are unarmed and waving Canadian flags talking about love. A lot of them brought their kids. Should CNN’s national security contributors and the neoliberal politicians who are attacking them really weigh into this? No. Because they can’t win it. One side is too sympathetic. The other is too loathsome. But they can’t help themselves. They are so threatened by disobedience that they rush forward with swords drawn. They know if Canadian truckers can get away with it the game is over. So they must crush anyone who questions the high priest of neoliberalism. That category includes plenty of people on the right, obviously, but tellingly it includes plenty of people who aren’t on the right, but just feel like thinking for themselves.

It includes anyone who invests in bitcoin. It includes Sikh truck drivers in Ottawa who now work for Putin. And Joe Rogan, who’s now a racist, and David Portnoy, who’s now a sex offender, and Tavis Smiley, who’s now a serial harasser. Those aren’t right-wingers, those are just people who dare to say what they think.

That slander hasn’t worked. And it won’t work here. You can’t cancel a bridge full of 18-wheelers and shame them into driving away. They are going to try it tomorrow. There’s going to be a showdown in Windsor, Ontario. We’ll see what happens. But the rest of the world has already learned the lesson. Which is, if you resist, if you say you’ve had enough, peacefully, cheerfully, with love, they have to pay attention. It’s the only thing they pay attention to.

This article is adapted from Tucker Carlson’s opening commentary on the February 9, 2022, edition of “Tucker Carlson Tonight.”

How to set up voicemail on your Android phone