Overall, Trump is still the favored pick for president among white Christian voters, with majorities of white evangelicals, white Catholics and white non-evangelical Protestants telling Pew they were leaning toward voting for him. But since white Christians are a key part of the electorate ― making up about 44% of registered voters ― the smallest dip in support in a few crucial swing states could spell trouble for Trump.

The dip was particularly noticeable among white Catholics, according to data published Tuesday. In late July and early August, Trump held a 19 percentage point lead on the Democratic nominee, former Vice President Joe Biden, who is  Catholic (59% to 40%). That lead shrank to just 8 points in Pew’s latest poll, which was conducted among 10,543 registered voters nationwide from Sept. 30 through Oct. 5.

White non-evangelical Protestants’ support for Trump dropped from 59% over the summer to 53% this fall.

The president’s most reliable supporters ― white evangelical Protestants ― are still firmly in his camp, with 78% saying they intended to vote for Trump next month. But even in this group, a few percentage points had been shaved off since the summer, when 83% said they would vote for Trump. 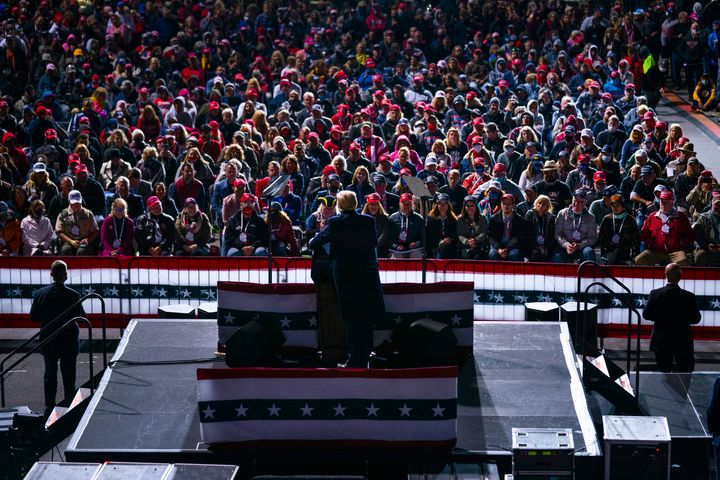 Researchers found that race strongly correlated with voting preferences during the 2016 presidential election. These preferences persisted when Christian voters were separated out into religious groups, with majorities of white evangelicals, white Catholics and white non-evangelicals voting for Trump, and majorities of Black Protestants and Latino Catholics casting their ballots for the Democratic rival, former Secretary of State Hillary Clinton.

Racial divisions in voting preferences within Christian groups appear to be holding steady in 2020. Within the group surveyed during Pew’s fall poll, about 90% of Black Protestants and 67% of Latino Catholics said Biden was their preferred candidate.

Over the past four years, white Christians, particularly evangelicals, have stood apart from other American religious groups because of how strongly they have supported Trump and his policies. They’ve supported his heavily Muslim-targeted travel bans, his plans to expand the wall along the U.S.-Mexico border and his handling of the coronavirus pandemic ― often at much higher rates than other American religious groupings.

Pew’s poll was conducted during a tumultuous time in the campaign. Trump announced that he had tested positive for COVID-19 on Oct. 2, about halfway through the data collection period. With the Trump administration and the GOP-controlled Senate moving quickly to replace the late Justice Ruth Bader Ginsburg with a conservative Supreme Court justice ― a key priority for many white conservative Christians ― there’s still time for shifts within this religious demographic.

Finland's PM left an EU summit where she dined with dozens of world leaders, a precaution after discovering possible exposure to COVID-19