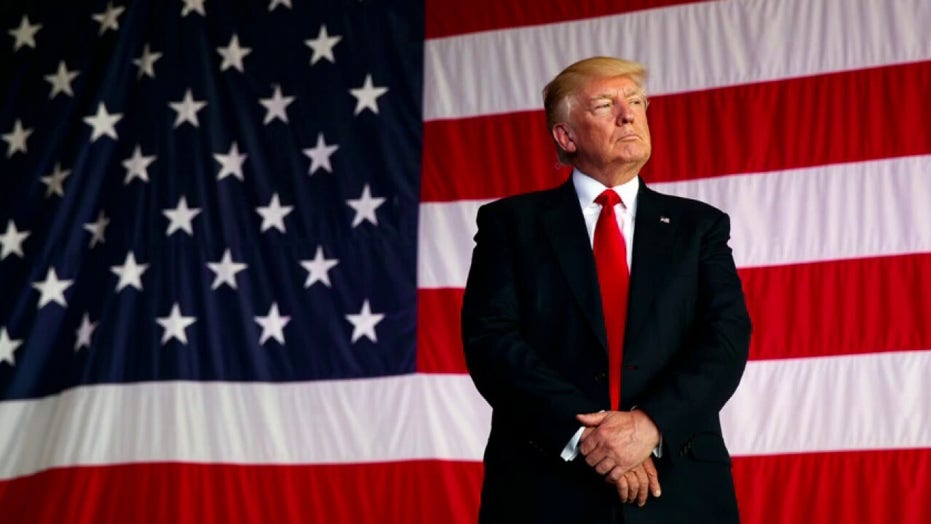 There's more than three years to go until the next Iowa caucuses and New Hampshire presidential primary, but what some considered the first cattle call in the 2024 White House race takes place next week.

That's when the Republican National Committee (RNC) holds its annual winter meeting, which will be held in-person on Amelia Island, Fla., Jan. 6-8.

WOULD A TRUMP 2024 ANNOUNCEMENT FREEZE OUT GOP RIVALS?

While re-electing chair Ronna McDaniel and choosing vice chairs and other officials tops the agenda, the gathering of the 168 committee members and other prominent GOP officials will also be an opportunity for some of the potential contenders for the next Republican presidential nomination to make friends and build bonds with the party’s top activists, fundraisers and rainmakers.

Topping the list of possible White House hopefuls at the confab will be President Trump, who is scheduled to address the crowd on the second day of the gathering. 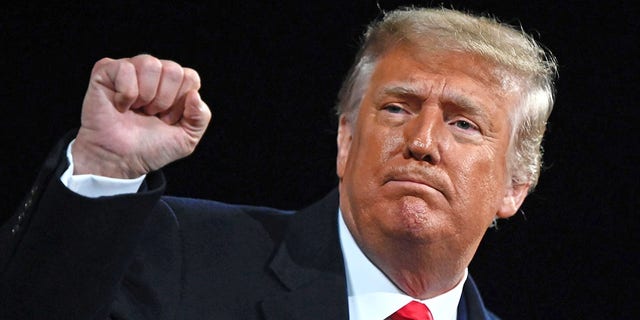 President Trump raises his fist at the end of a rally to support Republican Senate candidates at Valdosta Regional Airport in Valdosta, Ga., on Dec. 5, 2020. (Photo by ANDREW CABALLERO-REYNOLDS/AFP via Getty Images)

Trump, who continues to fight the 2020 election results and refuses to concede to President-elect Joe Biden, publicly hinted at the beginning of December that another presidential campaign may be in the cards.

"It's been an amazing four years. We are trying to do another four years. Otherwise, I'll see you in four years," the president told supporters at a White House holiday party for RNC members. Two GOP sources who attended the function confirmed the president's comments to Fox News.

Behind closed doors, Trump has told advisers that he wants to run again in four years, and he could potentially announce his bid before or even during Biden's inauguration on Jan. 20, according to reporting from Fox News’ chief White House correspondent John Roberts.

The president is scheduled to speak at the RNC confab the day after a joint session of Congress is widely expected to certify Biden’s 306-232 Electoral College victory after objections from some pro-Trump House and Senate Republicans.

Trump won't be the only potential 2024 contender at the RNC gathering. 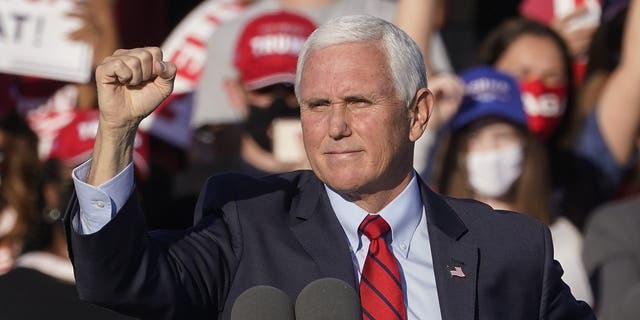 Vice President Mike Pence speaks during a "Save the Majority" rally on Thursday, Dec. 10, 2020, in Augusta, Ga. (AP Photo/John Bazemore)

"The RNC members represent the grassroots across the country, and so it's an important place for potential '24 candidates to come and talk about their vision for the country," longtime national party committee member from Mississippi Henry Barbour told Fox News.

Despite facing the first veto override of his presidency, Trump remains extremely influential among Republican lawmakers and his popularity among Republican base voters and other Trump supporters remains sky high.

MARYLAND GOV. HOGAN WANTS GOP TO RETURN 'TO IT'S ROOTS'

Trump has made it clear that he intends to stay very involved in Republican Party politics after he leaves the White House on Jan. 20. He set up a leadership PAC immediately after the November election, and much of the fundraising the past two for his legal moves to contest the election results are being steered to the new organization. Trump also endorsed McDaniel – a major ally – for another term steering the RNC. And he has targeted Republicans such as Govs. Brian Kemp of Georgia and Mike DeWine of Ohio, and Sen. John Thune of South Dakota – who are all up for reelection in 2022 – for refusing to help him upend the presidential election results or for acknowledging Biden's victory.

Trump's presidential approval rating among Republicans has stayed in the stratosphere. It stood at 86% in a Fox News national poll and at 90% in an NPR/PBS/Marist survey, which were both conducted in early December.

The percentage of Republicans who want Trump to run for president again in 2024 – 71% in the Fox News poll and 57% in the NPR/PBS/Marist survey – is significantly lower, but still a very solid majority. 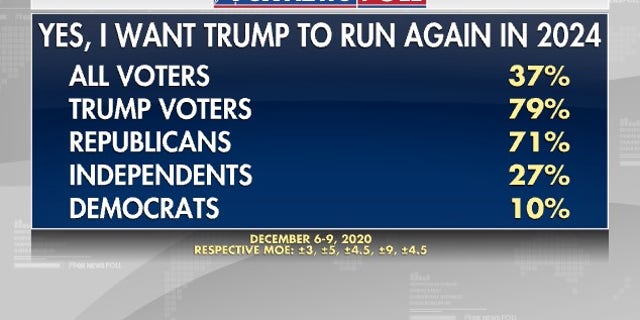 It was a similar story in a USA Today/Suffolk University national poll conducted last week. Nine out of 10 Republicans gave the job Trump is doing in the White House a thumbs up – with 71% of them saying they would vote for Trump again in 2024 if he runs.

Nearly two-thirds of Republicans in New Hampshire, the state that holds the first primary in the race for the White House, say they would like to see Trump make a 2024 bid to return to the White House. That’s according to a survey from the University of New Hampshire (UNH) conducted in November.

"Until Republicans come up with an obvious person to replace Trump, he's going to be seen as the front-runner going into 2024," noted UNH Survey Center director Andrew Smith.

Barbour emphasized that "of course Trump is the front-runner. He's the president of the United States. He's been a force unlike we've seen in the last several decades in American people."

But while noting Trump's "front-runner" status at this extremely early point in the next White House race, Barbour forecast that "like the '16 cycle, this will be a wide-open race and there will be an opportunity for others to emerge, but they'll have to perform, as will President Trump."

Neiman Marcus is selling a $255,000 RV in its extravagant 2020 Fantasy Gifts list as RV sales continue to boom

The tax breaks for homes that help you now

Latest Posts
Gold Futures Settle Notably Higher As Dollar Retreats
DOJ Won’t Seek To Terminate Or Modify Consent Decrees Governing Music Licensing
Mayor Demands Tighter Security in D.C. for Biden Inauguration
Records Prove The Obvious: Fervent Trump Fans Fueled The Capitol Siege
Yellen Runs Into GOP Resistance to ‘Act Big’ Call for Stimulus
Recent Posts
This website uses cookies to improve your user experience and to provide you with advertisements that are relevant to your interests. By continuing to browse the site you are agreeing to our use of cookies.Ok