DORAL, Fla. — President Donald Trump has $200 million in the bank for his reelection — or $61.7 billion less than one of the Democrats trying to unseat him.

And that 300-fold disparity between what the power of incumbency has allowed Republicans to sock away over the past three years and the bank account of former New York City mayor Michael Bloomberg is generating an undercurrent of unease in an otherwise confident Trump world.

“Last year, we raised close to half a billion dollars in coordination with the Trump campaign, the most ever in a non-presidential election year. That includes over $200 million cash on hand,” Republican National Committee Chairwoman Ronna McDaniel crowed at last month’s meeting at Trump’s Miami golf resort, pointing out that the Democrats had but a tiny fraction of that.

But while McDaniel and others bragged about their haul publicly, privately members wondered whether all of that could be overpowered with the stroke of a pen.

“Bloomberg worries me,” said one senior RNC member on condition of anonymity, recalling the tens of millions Bloomberg spent in the final weeks before the 2018 midterm election that helped Democrats win the House. “It’s a huge variable.”

Rick Wilson, a longtime Republican consultant and a vocal Trump critic since the start of the 2016 primaries, said Bloomberg’s vow to spend 10 figures regardless of whether he is the nominee could indeed determine whether Trump wins another four years or not.

“If he commits that much, it’s a major game-changing level of political impact,” Wilson said.

According to his campaign’s filings with the Federal Election Commission, Bloomberg has already spent $409 million of his own money for his primary election through Jan. 31. 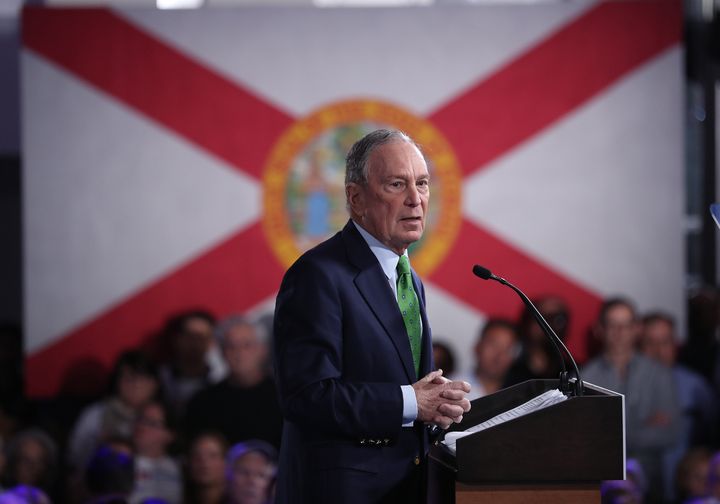 Under FEC rules, Bloomberg could spend however much of his fortune he wants, in favor of or against whomever he wants, so long as he doesn’t coordinate his efforts with a candidate. Meaning that while he could not give more than $2,800 to the eventual Democratic nominee for the general election or $35,500 to the Democratic National Committee, he can spend hundreds of millions of dollars, or a billion, or even more on “independent expenditures” to help the Democrat and hurt Trump.

Wilson said he has heard Bloomberg is ready to spend as much as $10 billion to make sure Trump does not get a second term. In practical terms, that could mean endless television ads in every swing state market attacking Trump as well as paying for the basic blocking and tackling of a political campaign that an impoverished Democratic Party may not be able to do on its own.

“He can open field offices. He can hire staff,” he said. “What he can do is all things the Democratic party cannot afford.”

Bloomberg television ads that attack Trump as much as they promote himself are already ubiquitous across the country. And that other major threat his billions pose to Trump and down-ballot Republicans is on display 2,000 miles west of Doral, in a squat one-story building two blocks from the Phoenix home of the Arizona Diamondbacks baseball team. There and in a half-dozen field offices around the state, dozens of full-time campaign staff are preparing for the March 17 Democratic primary doing the basic grunt work of any political campaign: organizing volunteers, distributing campaign literature and keeping tabs on voters who have requested mail ballots to make sure they are returned.

Typically staff and volunteers in a primary campaign move from state to state with the voting schedule until the candidate either runs out of money or secures the nomination. Bloomberg’s Arizona staff, though, are guaranteed jobs through the general election.

“If I were Trump’s people, I’d be very afraid,” said Luis Acosta, Bloomberg’s Arizona state director. “Mr. Bloomberg is committed to defeating Trump, whether he is the nominee or not.”

Michael McDonald, chairman of the Nevada Republican Party, watched Bloomberg purchase ads ridiculing Trump on a giant electronic billboard on the Las Vegas Strip, even though he wasn’t on the Democratic ballot in that state last weekend.

“Anybody who has that much money and is willing to put it toward an effort, you’d be a fool not to be concerned about the messaging,” he said. “He’s definitely a power force.”

In the final weeks of the 2018 midterm elections, Bloomberg used two political action committees he funds to run $56 million worth of television and online ads attacking House Republican candidates in 24 districts. Democrats won in 21 of them.

He added, though, that he is less worried about the Bloomberg threat now that Vermont independent Sen. Bernie Sanders has taken the lead for the Democratic nomination because he doubts billionaire entrepreneur Bloomberg — notwithstanding his statements to date — would spend significant money to elect a self-described democratic socialist. “He cannot support Bernie Sanders. There’s no way,” he said.

Trump Offers Tepid Support to Mulvaney as He Departs for India