CSL’s chief scientific officer Andrew Cuthbertson has warned it is premature of financial markets to treat the coronavirus as little more than a bad cold, saying there a large gaps in knowledge and a lack of reliable information.

Professor Cuthbertson disagreed with those within financial markets who were complacent or viewed the coronavirus as a bit of a yawn.

"It’s too early – I would say that is an ill-informed yawn. Look at some of the supply disruption that we are seeing in different sectors of the economy. 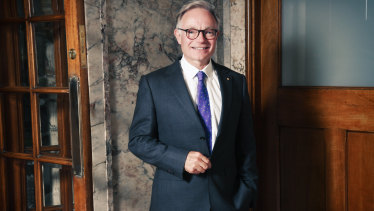 "Financial markets tend to overreact both ways … panic on the announcement and then stop paying attention."

Professor Cuthbertson, who is also the research and development director at the $149 billion ASX-listed biotech giant, argues the potential danger of coronavirus can be most effectively determined by using mathematical modelling.

He has plenty of first-hand experience in dealing with global epidemics.

"We have had experience with things like flu pandemic back in 2009 and the world has been through SARS and MERS, which are part of the coronavirus family and those are epidemic situations so I think there are broad things we can learn.

"But let's also accept that it's a rapidly emerging situation with the current Wuhan virus so there are just big gaps in our knowledge I can’t fill right now and nor can anyone actually."

Therein lies the problem with establishing a model – the lack of accurate inputs.

The key is reliable information on rates of infection and mortality but most importantly the rates of transmission. And authorities and researchers need to trust the information from not just Chinese officials but those in nearby countries – and some of this has been called into doubt.

CSL, one of the largest biotechnology companies in the world, has joined the global effort to combat the virus, lending its technical expertise and Seqirus vaccine to bolster the University of Queensland’s efforts to develop an inoculation for coronavirus (COVID-19). Coincidentally, CSL’s existing Chinese facility and its 600 staff are situated in the Hubei Province at the epicentre of the epidemic.

The University of Queensland is only one of many scientific teams around the world in the race to develop treatments or vaccines.

The mathematical model is based on the number and frequency of transmissions from each infected human.

Only last week there was a major spike in the number of infections but which, according to the World Health Organisation, was the result of better diagnostics rather than a change in the trajectory of the outbreak.

"If the transmission rate in your model is less than 1, it (the virus) will die out quickly. If it's greater than one, like 1.1 or 5, this will tell you how rapidly it will transmit. Then there are other important things to understand like – how sick do people get? Do they end up in hospital? Do they die?'," Professor Cuthbertson says.

He says those things are tremendously important because they feed into accurately measuring the rates of infection. If people can be infected but don’t get very sick, they can be walking around touching things and coughing on people, so infecting others.

It's a rapidly emerging situation with the current Wuhan virus so there are just big gaps in our knowledge I can’t fill right now and nor can anyone actually.

"For example, what we learnt from SARS is that that made people very sick. You knew you had it, you felt terrible, you sought medical attention and you ended up in hospital and about 10 per cent died."

Thus SARS was able to be better modelled because, he says, "the people that were infected were easily identifiable, rapidly isolated and while it was bad for a period of time, public health measures were able to control it quickly and over a period of months it declined".

And those people who are infected but don’t get sick – called transmitters – are very important to understand from a modelling and therefore public health point of view.

He warns against what he calls armchair commentators that downgrade the risk on the basis of the quoted mortality rate of 2 per cent.

"The trouble is if you have 50 million people infected that’s a million dead. So a 2 per cent mortality rate depending on how widely spread the disease is can have a huge public health impact."

"Of course I’m not saying that it's not a potentially important public health impact but right now influenza causes a bigger annual public health morbidity and mortality but this (COVID-19) is closing down parts of the world."

But in Professor Cuthbertson’s opinion, despite this disruption, until more is known about transmission rates the public health authorities in China and in Australia are doing the right thing. "I don’t think there is a choice," he says.

"When people get sick you need to isolate them … the point of doing that is to alter the transmission ratio … at the same time work on things like antivirals and vaccines. But those things take time."

How long and what’s involved?

Professor Cuthbertson explains that the first step is to find what’s called a candidate vaccine (he says the University of Queensland has a novel way of generating a candidate). You then need to build around that candidate assays so you are able to measure it then produce it in sufficiently adequate quantities to undertake pre-clinical toxicology, then undertake ethical human testing for safety and the effect on the immune system.

He says you need the right skills and facilities to scale up production to millions. And then there’s the matter of deciding who to vaccinate first.

Professor Cuthbertson describes it as "a huge amount of work".

"I think all going really well, it will be possible to have candidates approaching human testing in four to six months.

"But given the scale-up and clinical testing and so on it would be very challenging to see how you could have even a small number of doses in under a year and a full-blown vaccine response is likely 18 months away."

Despite expectations from some Chinese experts that the rates of transmission are falling and containment is only months away, Professor Cuthbertson says, "I think at the moment we have to assume it's going to get worse but I would be thrilled if the data coming out of Wuhan supports the case that it is plateauing. That would be great."