(CNN Business)“We’re about to be joined by a very important customer,” said Christian Braun, CEO of collectible e-commerce company HobbyDB, during a recent Zoom meeting with his marketing team. “Over to you, Nick.”

That’s St. Nick, actually. A jolly ho-ho-ho-ing Santa entered the virtual room ringing a bell and turning the meeting’s energy level up at least 100 notches. “I need to speak to the customer service department!” he cheered. “I have a major complaint!”
This Santa Claus is one of a handful of actors employed by a new service called SantaZoomBomb.com who have Zoombombed their way into meetings and family calls this holiday season. For $59, a Santa will unsuspectingly join a call, teasing colleagues with awkward inside jokes and references to relevant projects or work assignments. People fill out a questionnaire before the meeting, providing Santa with details and talking points. Customers can also specify whether they want Santa to be naughty or nice.

The reception can sometimes be mixed. HobbyDB’s team laughed and generally played along. By contrast, when Santa made a surprise appearance wearing an Oculus headset during a CNN Business team meeting, cracking jokes about current events and some people on the call, the reactions from the participants on Slack ranged from cringing to “WHAT IS HAPPENING?”

Santa Bombing piggybacks on the runaway success of virtual Santa visits last year. Like the explosion in popularity for curbside dining options and Zoom itself, the sudden rise of Zoom Santas met a pandemic need. It offered families a safer alternative to the annual tradition of visiting Santa Claus at a mall amid a surge in Covid cases, and offered actors a chance to still earn a paycheck for Santa work over the holidays — in some cases far more money than with IRL Santa work.

But there are signs that demand for the virtual North Pole is heading south as we approach the second holiday season of the pandemic. Mitch Allen, founder of HireSanta.com, a leading staffing company for Santas in the United States, said interest in virtual Santa visits persists this year but it’s down significantly from 2020. 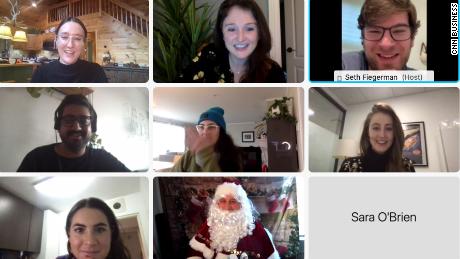 “Last year, we did tens of thousands of virtual visits, but it’s down substantially by about 60% to 70% this year,” he said. “People are anxious to get back out to see Santa in person and reconnect there with friends and family. They’re trying to make up for the time away.”
Even as some families appear ready to move on, some Zoom Santas are hoping to hold on to the virtual holiday magic for another season, if not longer. And some services are pushing new options to achieve that goal.

Each year, Don White, 80, and Mary Rogers, 74, dress as Mr. and Mrs. Claus in Kansas City, Missouri, frequenting restaurants, museums, fundraisers and events, including the Kansas City Royals baseball team’s holiday festival. But last year, the couple instead offered Zoom calls through their website VisitFromtheClauses.com and saw their annual income quadruple from the prior year.
The couple, who met on Match.com 14 years ago, logged about four to six video calls an hour in 2020 to kids and their families across the country, up to nine hours a day, as parents were desperate to find entertainment and something for their kids to do inside. “We were so busy people were bringing us food because we couldn’t even leave the house,” Rogers said. 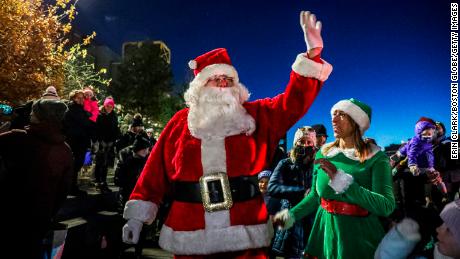 Now, they’re sticking with the virtual option for the forseeable future in part because of health concerns. (White was diagnosed with Leukemia earlier this year.) They’ve hired a handful of actors to fill virtual visit reservations while the couple operates at about 60% capacity for personal reasons. Meanwhile, Rogers’ son, Josh, launched SantaZoomBomb.com this year as a complementary service in an attempt to build on their success.
“We can make more money and do more visits this way too,” White said of their Zoom Santa work. The price for a private chat ranges from $49 for 10 minutes with either Mr. or Mrs. Claus and $89 for the couple together.
Even with the apparent decline in demand this year, Allen expects virtual Santa visits will become a permanent addition for some families who’d rather skip waiting in long lines or want more personalized interactions. Virtual Santas often receive talking points ahead of Zoom calls to make calls more intimate.
At the same time, demand for appearances by Santa Claus at parties, parades and other events has skyrocketed this holiday season but the number of trained and available Santas has gone down. Some Santas don’t feel comfortable yet doing in-person visits. About 350 Santas that worked with HireSanta.com have died in the past 18 months due to Covid-19 or other heath issues, according to Allen, and others have hung up the red coat for retirement. Enrollment at Santa training schools in the US was down this year, too.

Some companies like HireSanta.com have been offering virtual Santa visits for nearly 8 years, but after last year’s mega success many are now looking to freshen up the concept and keep the demand going for another year.
Similar to Santa Zoom Bombing, some companies are adding more interactive elements. T-Mobile is offering a free Stream-a-long option, which puts participants in a virtual sleigh ride with a live Santa to tour the North Pole and receive a photo afterward. Other companies such as The Santa’s Club send letters and gifts in the mail to kids after virtual visits. 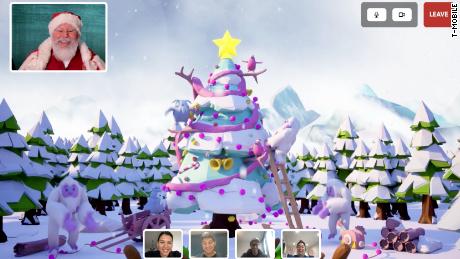 “It’s a trend we’ll probably see a lot going forward,” Allen said. “Some retailers, such as Bass Pro and Cabela’s, offer crafts and other activities while you wait in line. Virtual Santa companies are headed in the same direction.”
In-person Santas have also gotten creative with their setups to align with local mandates for masks and social distancing. Santa Claus at Macy’s Santaland in Herald Square wears a mask and sits behind a desk in his workshop, and some mall operators have set up benches, snowglobes and other scenes to keep children away from laps. 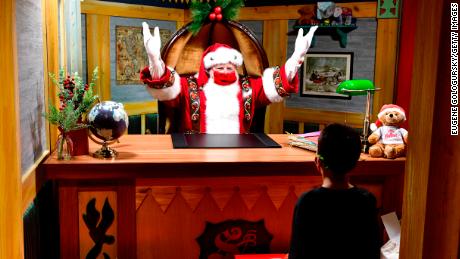 But with children under age 5 still unvaccinated in the United States, virtual visits could remain the preferred way to see Santa this year for some families.
“A lot of families can’t, in good conscience, go back to see Santa in person,” Rogers said. “They say, ‘I don’t know who this person is. I can’t take my newborn baby and put it in Santa’s lap and hope that nobody gets sick.'”
Source: Read Full Article

Psaki defends reopening of migrant facility for children under Biden: ‘This is not kids being kept in cages’