Days are busy for Sophia Kianni, a climate activist and founder of the nonprofit Climate Cardinals.

Much of her work centers on the climate crisis, a topic she has been interested in since visiting Iran, her parents’ homeland, seven years ago and discovering her extended family knew nothing about the subject.

Launched in May 2020, Climate Cardinals translates information about the climate crisis into over 100 languages, including Swahili, Bulgarian, Mongolian, and Portuguese. Kianni, 19, had realized that most of the research was in English but that most people in the countries most affected by the climate emergency don’t speak English.

“Climate change is a global issue that disproportionately affects communities that don’t speak English,” Kianni told Insider. “It’s critical to translate climate information into as many languages as possible to make sure that these mostly-minority communities are informed.”

Kianni made headlines in 2019 after joining the activist Greta Thunberg’s Fridays For Future to organize climate strikes and protests with high-school students. She became a national strategist for the group and a partnership coordinator for the environmental advocacy group Zero Hour.

Last year, Kianni was named a spokesperson for another climate-crisis organization, Extinction Rebellion.

She’s also a climate advisor at the United Nations and the American Lung Association; a board advisor for the tech startup CommunityX and the charity EarthPercent; and a senior partner at the Gen Z marketing firm JUV Consulting.

Kianni was hailed as one of Vice’s humans of the year in December. She was selected as a National Geographic Young Explorer and the Select Committee on the Climate Crisis tweeted about her advocacy.

Kianni broke down what a typical Friday looks like, including taking meetings with UN officials and getting pizza with friends.

Kianni wakes up in her home in McLean, Virginia, and eats breakfast: a banana, a homemade rice pudding, and a protein shake. She styles her hair, packs her computer and a few professional blazers for her meetings, and checks her calendar to see what her day looks like. 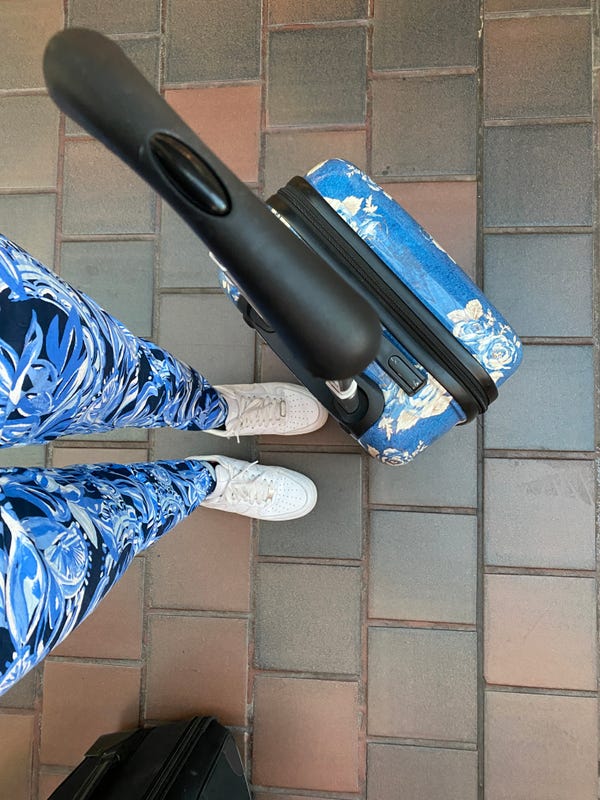 On this day she headed to New York City to visit the UN and JUV’s headquarters. Last year, all of Kianni’s events were virtual, but since being vaccinated she’s been traveling to attend meetings in person.

“My relatives in Iran knew very little about climate change because there’s very little information available in Farsi, which is their native language,” Kianni said. “The United Nations only provides climate information in six languages that account for less than half of the world’s speaking population.”

Kianni, who is bilingual, began translating articles about the climate crisis from English to Farsi and sending them to her family via WhatsApp. Last year, she decided to further her work by launching Climate Cardinals, where she and 8,000 volunteers translate climate information and upload the documents online for anyone to access.

Climate Cardinals also works with organizations such as Unicef and the UN Environment Program.

Her friend is also headed to New York City, so they take the train together. Kianni lives about a 30-minute car ride from the nation’s capital. She and her friend arrive at Union Station at 8 a.m. and buy bagels as they wait to board their train.

Once seated, Kianni reads “The Martian” by Andy Weir, a science-fiction novel that was made into a film starring Matt Damon in 2015. “My friends and I have a mini book club,” she said. Now that school is out for the summer, she said, “I have time to read again.”

Still on the train, she virtually attends a UN meeting at 10 a.m.

Kianni calls into a UN meeting with Jayathma Wickramanayake, the UN secretary-general’s envoy on youth, and six members of the UN Youth Advisory Group on Climate Change.

Kianni was invited to join the group last summer as the only US, Middle Eastern, and Iranian representative — and its youngest member. As part of the group, Kianni attends meetings with António Guterres, the UN secretary-general, and gives him advice on things like which UN documents to translate and when to emphasize environmental racism. 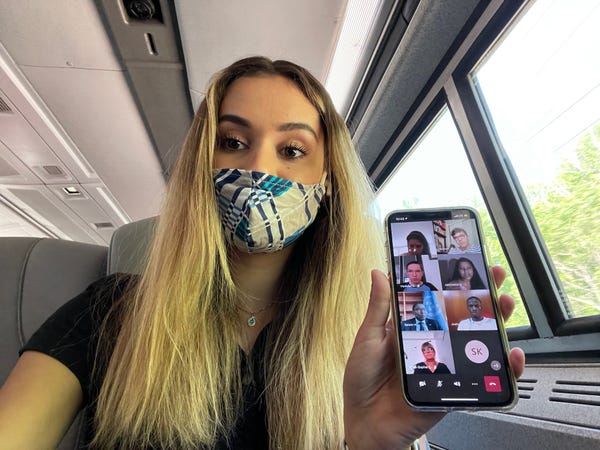 During the call, they all give updates on their projects. In December, the group published a report outlining six key actions young people wanted world leaders to take regarding the climate crisis.

“Our generation is going to be disproportionately affected by climate change,” Kianni said. “There is a need for young people to be involved in decision-making spaces, so we can really convey the work we’ve been doing for the past few years.”

Next she answers emails

Kianni coordinates speaking engagements and confirms her attendance for an ocean-conservation gala in Washington, DC.

Kianni also goes over updates from Climate Cardinals, which has chapters in over 41 countries.

As she’s just transferred to Stanford from Indiana University, Kianni posts an introduction message in the Stanford 2025 Facebook group to connect with classmates. “It’s a great success,” she said. “Students from Stanford follow and direct messages to me on Instagram.”

At noon she arrives in New York City

Kianni walks from Penn Station to her hotel to drop off her luggage, then takes the bus to the UN building in midtown. She’s greeted by Esther Agbarakwe, a UN program officer. 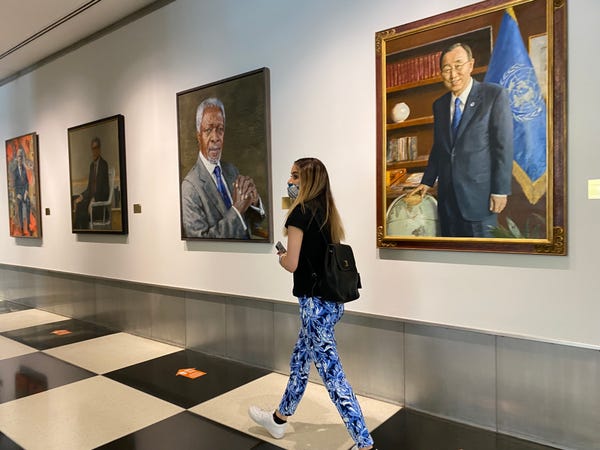 They head to the office of Selwin Hart, a special advisor to the secretary-general on climate action.

Kianni said that in the beginning she was a bit nervous about meeting big names. “But now I really believe that I belong at the table and that my voice is important to UN discussions,” she said. “I’m no longer nervous but more so excited to share my experiences and perspective on climate justice.” 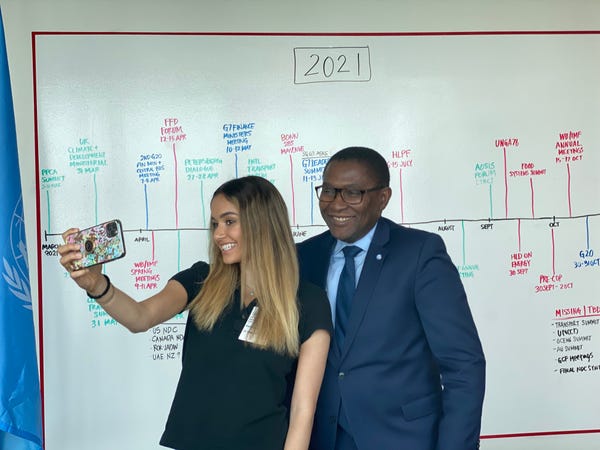 Kianni and Hart discuss strengthening the UN’s commitment to youth participation and the role of young people in advocating the delivery of the $100 billion that countries pledged in 2015 to help combat the climate crisis.

“You really need money in order to fund the infrastructure needed to have a sustainable transition away from fossil fuels,” Kianni said, adding that it was “critical” to prioritize frontline workers. “We need to make sure they can now work in the clean-energy sector.”

After the meeting, she goes on a brief tour of the UN building.

She walks to the nearest bus station and heads to JUV Consulting’s headquarters to meet the rest of the senior executive team. 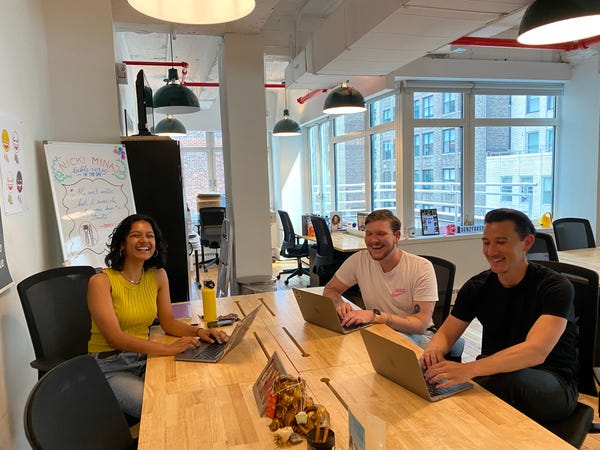 Cofounded in 2016 by Ziad Ahmed, 22, the firm works with over 20 Fortune 500 companies on everything from major research projects to full-scale marketing campaigns. Last summer, Kianni applied to work at JUV as a consultant, and she was promoted to junior partner before becoming a senior partner in January.

At JUV she advises clients on social media and sustainability and how to use TikTok to reach Gen Zers.

After meetings, the team takes a break. “We make some fun TikToks and also head to the rooftop to have coffee and enjoy the beautiful weather,” Kianni said.

At 4 p.m. she meets with friends

She walks across the city to meet up with some friends at Madison Square Park.

Kianni says she walks everywhere because it’s better for the environment and more affordable than pricey Uber rides in New York.

“Honestly, I got a blister after a few days ’cause I was walking so much,” she said.

She walks back to the hotel at 6 p.m.

Back at the hotel, Kianni takes a nap before continuing work. She schedules a Zoom call with a BBC reporter about the climate emergency and a call with a new JUV client.

Around 8 p.m. she meets up with another friend. They walk to an Italian restaurant and order a margarita pizza.

Kianni walks back to her hotel to answer a few more emails.

She texts her younger sister to help her find a prom dress. Kianni scrolls through TikTok and Instagram for 20 minutes before she gets drowsy and falls asleep.

On Monday she’ll head back home and continue to do it all virtually.

I'm a first-time founder who raised $2.5 million and launched a startup during the pandemic. As a woman, here's how I got comfortable talking about my success.

Personal bankruptcies expected to rise in 2021 as stimulus ends