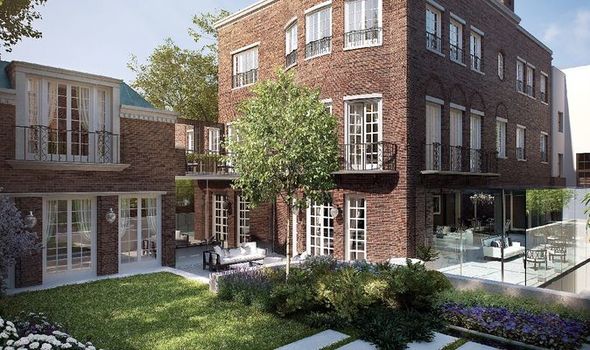 FROM historic castles to stately homes, millionaires’ mansions to high-tech penthouse pads, Britain is home to some of the world’s most expensive houses. And discerning buyers prepared to spend seven or eight-figure sums expect the best. “People who deal in exceptional things want exceptional service,” says John Fisher, one of the estate agents featured in a new Channel 4 fly-on-the-wall documentary, Britain’s Most Expensive Houses.

The programme opens with John and colleague Mary Roberton viewing £30million Harford Manor on behalf of a French- Moroccan millionaire. The client is based in Dubai and can’t travel to the UK due to Covid travel restrictions so John and Mary are acting as agents.

Set in 40 acres of prime polo country just outside Windsor, Harford Manor is a 21st century take on the classic English country house – 22 times larger than the average UK home. It has four reception rooms, a dining area that seats 32 comfortably, a gym, a swimming pool, stables, wine cellar and quarters for all the staff needed to run it.

Many of the country’s most prestigious and expensive homes never appear on the open market and sales are facilitated through agents like John, who is part of property brokerage firm Sotheby’s International Realty. He found out Harford was available for purchase after being invited to a party there by its owner.

“You’re not going to wander through Rightmove or Zoopla and find it lurking there,” says John. But, of course, it’s not him buying it – John needs to convince prospective owners to make an offer. He has his eye on the hefty commission he’ll earn if he gets the deal over the line but will he pull it off before the seller loses patience? “We have had the interest, but closing it is another matter,” John admits.

MEANWHILE, fellow Sotheby’s agent Shereen Malik-Akhtar is showing clients a flat in St Pancras Chambers, the iconic Grade I-listed London landmark, formerly the Midland Grand Hotel. Located on the second floor of the clock tower, the £4.6million apartment is currently owned by model and actress Lily Cole. The Spice Girls filmed the video for their 1996 hit Wannabe on the building’s former central staircase.

Looking round is Anastasia, originally from St Petersburg, Russia, but now resident in London where she owns a Harley Street clinic specialising in dermal fillers and Botox. With a budget of up to £5million, she wants to sell-up in Russia and buy in London.

“I own a few properties in St Petersburg and Moscow, and I’m planning to sell some of them because I plan to stay in London permanently,” she explains. St Pancras Chambers isn’t for her and, eventually, she buys a £4.1million apartment off-plan in the new Battersea power station development.

Back in the Sotheby’s office, managing director Guy Bradshaw has a meeting with Kam Babaee, chief executive of residential property developer company, K10 Group, about Plas Glynllifon. It’s one of the most expensive properties on the Llyn Peninsula in north Wales and is where Guy used to spend his childhood summer holidays.

An exquisite neo-classical Grade I-listed mansion built in 1836, Plas Glynllifon has 102 rooms and once hosted the official ball to celebrate the investiture of Prince Charles atp at nearby Caernarfon Castle. It was last on the open market two years ago at an asking price of £2million which might seem like a gw good deal, but it needs serious structural work to restore it.

There are few people in the world able to take on that sort of project, and Guy needs to find them fast before the mansion falls into a state of irreversible disrepair. Enter Kam, a London-based property developer with a track record in restoring historical buildings. He knows it requires a budget of £20million to restore the property but puts in an offer.

In the super-prime property world, contacts and networking are key and a broker’s little black book is their best asset. Demand doubled last summer, as the international super-rich gradually returned to the UK, and brokers need every advantage in the competitive super-prime market.

Head of the country office, Jason Corbett, has a personal connection to Otterburn Castle, Northumberland, because it was once hC owl owned by his ancestor, “Mad Jack Hall”, who lost his lands after the Jacobite rebellion. Jason pulls out all the stops to get the £3million listing, including using his mother to try to convince owner Elena he is the broker for the job.

Meanwhile, Shereen is trying to sell a £12million penthouse on the 42nd floor of the Southbank Tower in London and has attracted the interest of a young entrepreneur. The problem is, it is being sold “shell and core”, which means it is one large space with no internal walls, and another £1.8million will be required to turn it into a home.

A complete contrast to SouthbankTower is Jelleys Hollow in the heart of the Surrey Hills. This stunning £2.65million property in Cranleigh was a film location in Star Wars and the remake of Beauty And The Beast.

“Jelleys Hollow is named after a 17th century highwayman,” says John. “Bit of a Dick Turpin character. It’s very much what I would term a Hansel and Gretel cottage. Um, a little bit of a gingerbread place.”Another property on his books is a £3.6million Arts and Crafts mansion in the unlikely location of Bognor Regis, built in the 1920s for a director of Rolls-Royce.This beachside beauty has five bedrooms and six bathrooms and comes with games and cinema rooms, and its own beach-side guest house.

It has an indoor swimming pool, a spa centre and a spectacular coastal setting with direct access to the beach. But it costs more than 11 times the average property in Bognor, also home to a Butlins holiday camp, so John is looking to London for a buyer.

Constructed in 1928, it was extended four years ago in a £28million renovation. The Portland Stone staircase cost £580,000. It has eight bedrooms and a triple basement. But to secure the massive commission on this prize, Sotheby’s has to persuade the owner to let them sell Amberwood. Ultimately, says John, it’s down to trust. “You are dealing with people’s lives. People will let you sell their house if they trust you to do what they want.”

With $40 million in funding and a new international expansion, Hipcamp, the Airbnb of camping, is set to capitalize on consumers' desire to get outside during the pandemic