The United States should temporarily suspend the punishing sanctions it has placed on the leaders and economies of Iran and Venezuela and bolster humanitarian aid in order to help both countries deal with worsening outbreaks of the coronavirus, 11 Democratic senators argued in a letter to the Trump administration Thursday afternoon.

“As these countries struggle to respond to their domestic health crises, U.S. sanctions are hindering the free flow of desperately needed medical and humanitarian supplies,” the senators wrote in the letter, which was led by Sen. Chris Murphy (D-Conn.), a member of the Senate Foreign Relations Committee.

“While the shortcomings of these national governments are largely due to their endemic corruption, mismanagement, and authoritarian behavior, broad-based U.S. sanctions have exacerbated the failing medical response,” the letter said. “The Iranian and Venezuelan regimes are American adversaries, but the good people of these nations are not our enemy.”

The senators called on Secretary of State Mike Pompeo and Treasury Secretary Steven Mnuchin to temporarily suspend sanctions that may “impede” the delivery humanitarian assistance in Venezuela and Iran for 90 days and said the administration should clearly authorize the delivery of medical equipment like testing kits to the countries. The senators also said the administration should provide “unconditional aid” to Iran and Venezuela through a third-party country or organization.

The letter added to the increasing calls on President Donald Trump to ease the sanctions he has placed on Venezuela and Iran, the latter of which now has nearly 30,000 confirmed cases and more than 2,000 deaths linked to COVID-19. But the administration has refused to back down, saying this week it would not suspend or limit sanctions on Iran even in the midst of the crisis.

Trump has taken an even more aggressive approach toward Venezuela, where he has wielded sanctions as the primary tool in his yearslong battle to oust socialist President Nicolás Maduro. On Thursday, the Trump administration announced that the Justice Department would indict Maduro and other top officials on drug trafficking and money laundering charges.

That announcement came as the South American nation is already in the midst of two major crises: an economic collapse that has devastated its currency and caused millions of Venezuelans to flee to other nations, and a political crisis during which the increasingly autocratic Maduro has faced internal and international efforts to dislodge him from power.

Since March 13, when Vice President Delcy Rodríguez announced Venezuela’s first two confirmed coronavirus cases, the number of infections has grown to more than 100. Maduro implemented a nationwide quarantine last week, but experts have warned that the pandemic could explode in Venezuela in the coming days, as the crisis-stricken economy and political system combine to exacerbate the global health crisis it now faces.

“I think what we’re going to see in Venezuela is a transmission rate that is far higher than anywhere else in the hemisphere and a mortality rate that’s significantly higher as well,” said Geoff Ramsey, a Venezuela expert at the Washington Office for Latin America, a progressive think tank. “The things that we’re worried about in the United States are just a blip on the radar compared to how serious this crisis is going to be for public health in Venezuela.” 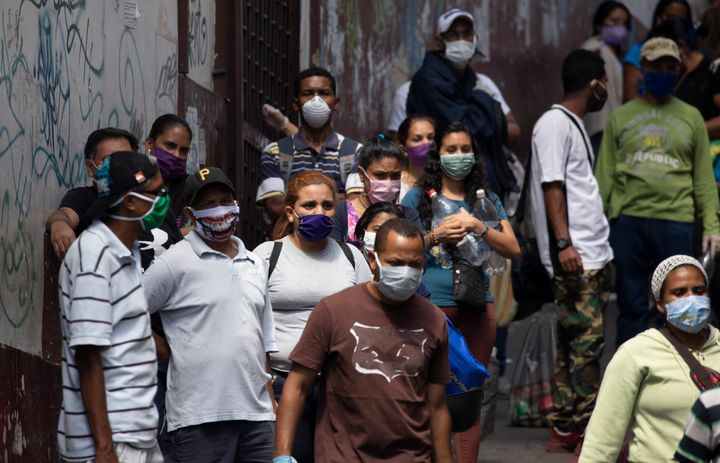 Whether the Trump administration eases the sanctions or not, the United States has “a moral obligation” to help address the coronavirus outbreak in Venezuela, given that it has directly involved itself in the country’s affairs, said Fernando Cutz, who served as a Latin America adviser on the National Security Council under both Trump and former President Barack Obama.

“What we need to do is create a real robust international aid package that is specific to COVID-19 and Venezuela,” Cutz said. “That’s a moral obligation because of the humanitarian crisis they’re going through, and because of our involvement in this crisis. We can’t say [it has] nothing to do with us. We are directly involved in Venezuela.”

Few places in the world are less prepared for a pandemic than Venezuela, which ranked 176th out of 195 countries and last among the 33 nations in Latin America in a 2019 measure of nations’ abilities to respond to a global health crisis.

The economic collapse that has occurred under Maduro has left the country short on medical supplies, food and even basic needs like soap. Running water is a luxury many poor and working-class Venezuelans cannot afford, and in many of the barrios around Caracas and other cities, social isolation is borderline impossible. The economic crisis has led to widespread malnutrition and declines in health quality, especially among poorer Venezuelans.

Venezuelan hospitals are “easily the worst” in Latin America, a region that already spends meager amounts on public health compared to most of the rest of the world, Ramsey said. The number of doctors, meanwhile, has been halved since 2015, as thousands of physicians have been among the estimated 4 million Venezuelans who’ve fled the country over the last four years. Those left behind are still professionally trained and capable, but they often lack access to even basic medicine.

“The doctor can tell you what you have and what you need, but he doesn’t have anything to give you,” said Marianne Menjivar, the country director for Colombia and Venezuela at the International Rescue Committee.

Maduro has continued to crack down on dissent as the outbreak has worsened: Venezuelan special forces arrested a journalist this week whose reporting had suggested the government was ill-prepared for the pandemic, and there is at least some distrust among Venezuelans in the government’s counting of cases, said Phil Gunson, a Venezuela expert at the International Crisis Group, a nonprofit that works in crisis-stricken countries.

Venezuela’s problems predate the sanctions the United States first began to implement in 2015, when Obama put restrictions on members of the Maduro government.

Trump has ramped those sanctions up repeatedly to include dozens more officials; as part of his regime-change strategy, he has also expanded the sanctions to include a de facto embargo on Venezuelan oil and PDVSA, the state-owned oil company.

Food and medical supplies are exempt from the financial sanctions, a fact U.S. officials have reiterated over the last year to dispute arguments that the restrictions have primarily punished ordinary Venezuelans rather than members of the Maduro regime. But while Maduro’s own corruption and mismanagement may be the primary cause of Venezuela’s woeful state in the face of a pandemic, the aggressive nature of the sanctions, experts say, has also driven many organizations who want to facilitate food and medical deliveries to avoid Venezuela altogether out of fear that even exempted activities could draw scrutiny from the United States.

“The reality is there’s widespread overcompliance with the financial sanctions that hampers the work of humanitarian organizations and restricts the ability of the government to be able to pay for badly needed medicine and medical goods,” Ramsey said. 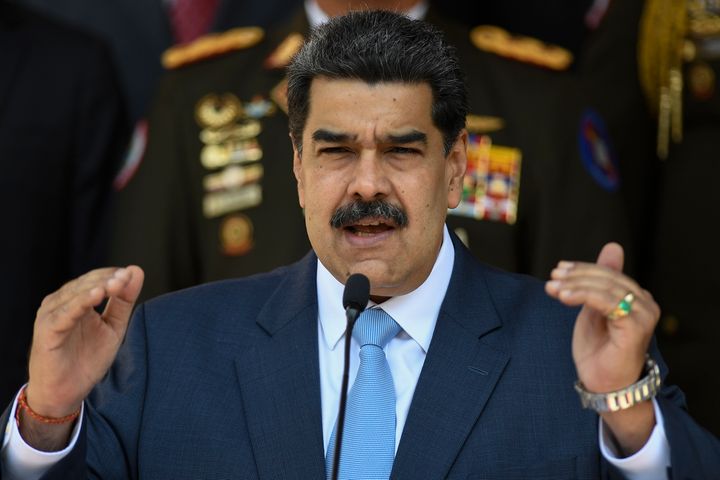 Cutz, the former NSC official, has been critical of Trump’s sanctions-heavy approach in Venezuela but is skeptical that easing sanctions would have a dramatic impact on the country’s ability to stem the crisis.

Rather, he suspects Maduro and his allies inside would siphon off money meant for relief in order to shore up the government’s meager cash reserves before sanctions were strengthened again.

“If they had a different leader in place who would actually spend money on the people, that would be huge and that would be great,” Cutz said. “Given the patterns we’ve seen over the last decade-plus, Maduro would just spend the money on his cronies, on himself, on keeping himself in power, on saving for a rainy day when we tighten the belt again.”

But even if the U.S. doesn’t ease sanctions, Cutz said, it should issue clear guidance to humanitarian organizations that it will not target any group trying to deliver aid inside Venezuela. And the U.S. government should work to piece together an aid package itself, he argued, in order to help Venezuelans through the crisis.

The Trump administration has likely already poisoned the well on its own ability to deliver aid to Venezuela, thanks to its politicization of a supposed humanitarian mission last year. It is unlikely Maduro would accept any aid directly from the United States.

As Murphy and the group of Democrats suggested Thursday, the U.S. could get around that problem by coordinating aid delivery through international partners and nongovernmental organizations already working in Venezuela, including the United Nations, the Red Cross or the Catholic Church, Cutz said.

The United States could also help ease tensions between Maduro and the opposition, which is led by National Assembly President Juan Guaidó ― whom the U.S. and more than 50 other nations regard as Venezuela’s legitimate leader.

The U.S. has broadly opposed any negotiations between Guaidó and Maduro throughout the political crisis, but the two sides need to work together to implement a response ambitious enough to stem the spread of the virus.

“We’re at this weird moment where in order to properly address the crisis, both Maduro and the National Assembly are going to have to set aside their political aspirations in the name of addressing the health needs of the Venezuelan population,” said Ramsey, of the Washington Office of Latin America.

“Unfortunately,” he continued, “everything we’ve seen over the last week suggests that neither of the opposition nor the Maduro regime has much interest in reconciling with the other. I’m expecting the political crisis to make the health crisis far worse.”

The U.S. Senate has focused primarily on responding to the coronavirus outbreak at home, but discussions about how Congress may be able to help stem the crisis in other countries, including Iran and Venezuela, could intensify in the near future, a Senate aide told HuffPost this week. The group of Democratic senators also said in their letter that continuing the sanctions without providing aid would amount to a strategic error in the effort to reach political solutions in both Venezuela and Iran.

“By allowing our sanctions to contribute to the exceptional pain and suffering brought about by the coronavirus outbreaks in both nations, we play into the anti-Americanism that is at the heart of both regimes’ hold on power,” the senators wrote.

But the Trump administration seems wedded to its aggressive policy in Venezuela, with hard-liners seeing the coronavirus outbreak not as a threat to ordinary Venezuelans, but as an opportunity that could finally break Maduro.

That approach will be disastrous for Venezuela and for the Americas as a whole.

“To simply reiterate the existing policy ― which is essentially that anything that helps induce the collapse of the government here is a good thing ― is extremely irresponsible,” Gunson said from Caracas. “If you’re going to cause the collapse of government in the middle of a pandemic, then you will be responsible for instilling chaos.”

China Ramps Up Virus Propaganda, And Stirs Even More Outrage