Learning that the US government is about to charge your company with breaking monopoly laws would not normally come as good news. But in Google's case, it might just be met with a sigh of relief.

For more than a year, antitrust regulators at America's Department of Justice have been circling the internet search giant, and this summer they have been gradually closing in. 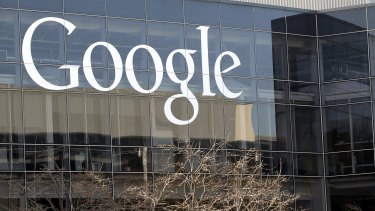 Google has long been in the crosshairs of the US government, Credit:AP

Although three other big US tech companies – Apple, Amazon and Facebook – are in Washington's crosshairs, Google has long stood out as the most likely candidate for monopoly charges.

The groundwork for building a case against the company has already been laid. Rivals such as Yelp have been griping about Google's control over its search engine and the internet's advertising infrastructure for years.

The company has been dealt three competition-related fines in Europe, amounting to billions of euros. Google is appealing all three.

Legal experts believe Google has the biggest case to answer. Unlike Amazon, Apple and Facebook, which do not have such obviously dominant market positions, Google accounts for at least 80pc of worldwide internet searches. The web's second most popular search bar appears on YouTube, which is also owned by Google.

Last week, reports emerged that the justice department's long-running antitrust investigation against Google was coming to a close. According to The New York Times, William Barr, the US attorney general, has been pushing lawyers for a case against the company to be filed by the end of this month.

Even if this timeline slips, pursuing charges before November's presidential election is likely to be a priority. While Donald Trump is unlikely to see cracking down on Silicon Valley as much of a vote-winner (tech companies remain largely popular, and barely register as political issues next to the pandemic, the economic crisis and social division), appearing to take action against Google will at least look like a proactive step. Perhaps more importantly, it would be a victory for Barr, who would be replaced in a Biden administration.

But at the same time, the urgency to bring charges has led to fears it could be a hastily prepared case. Several justice department lawyers have reportedly stepped away from the investigation or said they will refuse to endorse charges, fearing they will not be strong enough to triumph in US courts.

State-level prosecutors, who have been separately investigating the company, are also said to be split along political lines as to whether to join the justice department.

Stalling may be unwarranted. Lawyers are likely to ask for more time on just about anything, and regulators have had plenty of time to study Google's allegedly anti-competitive tactics. But any suggestion that a case will have been hastily put together is likely to concern anyone who believes the company's power should be curtailed. 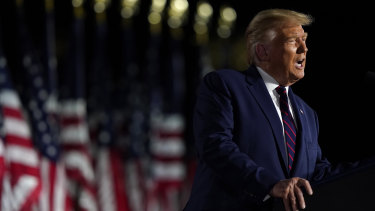 Pursuing charges against Google before November’s presidential election is likely to be a priority, but could backfire.Credit:AP

Unlike the monopoly enforcement model typically employed in Europe, in which companies are fined then have the option of a lengthy legal appeal, US prosecutors who are unable to settle an investigation must argue their case in court to secure punishment. And when they try, they often lose.

In August, a US judge shot down claims from the Federal Trade Commission that chipmaker Qualcomm had unfairly pushed out rival companies. Last year, the justice department failed to get a court to undo a merger between AT&T and Time Warner. A long history of US case law has made it exceedingly difficult for the government to win monopoly cases, especially when a service is provided for free to the consumer, as it is with Google.

All of this means that if the world's biggest search engine is to face competition charges in its home market, any case must be airtight. Lawyers abandoning the case because they fear it is being rushed does not suggest it will be. It is fair to say that Google would rather fight a hastily put-together legal challenge now than a comprehensive one later.

The picture that emerges is of a system that looks set up not to tame the tech giants, even if concerns about them are legitimate. Even when taking action against Google has support from both parties, and prosecutors have no shortage of complaints to investigate, the prospects for a successful challenge against the company, let alone the break-up that some would advocate, are unclear. The same could be true for Amazon, Facebook and Apple.

The more likely path to US competition crackdowns against Silicon Valley could be new laws, a prospect that a Congressional committee is investigating, but which might prove difficult in today's gridlocked Washington.

While taking action against the tech giants is a rare bipartisan issue in Washington, Republicans and Democrats want different things. One side claims Silicon Valley is censoring speech, the other that it is centralising power and amassing too much wealth. The proposed solutions differ, which partly explains why no significant tech regulation has come into force despite a widespread clamour for something to be done.

A new face in the White House may be able to break that gridlock.

But for now, Washington seems ill-equipped to take on Big Tech.

Latest Posts
Apple’s $15 Billion Tax Victory Faces EU Appeal at Top Court
Pelosi-Mnuchin Stimulus Buzz Masks Deep Divide to Getting a Deal
Another 870,000 Americans filed first-time jobless claims
New York stays ahead of London in top financial centers survey
European stocks seen modestly higher as investors monitor economic recovery, coronavirus
Recent Posts
This website uses cookies to improve your user experience and to provide you with advertisements that are relevant to your interests. By continuing to browse the site you are agreeing to our use of cookies.Ok