Depending on your perspective, Rivian’s initial public offering, which is valuing the maker of electric trucks at around $US100 billion ($136.5 billion) before it records any significant revenue, is either a perfect encapsulation of how investors focus on the long-term over the short-term, or a sign of the cultish appeal of electric-vehicle companies. For the sceptics, here’s how I’m making sense of the valuation.

It starts with Amazon.com, which put Rivian on the map two years ago when it announced it was buying 100,000 electric vans from the company to deliver packages to e-commerce customers. The base selling price per van will be a little over $US50,000, so even though Rivian has yet to record any meaningful revenue, it’s got a purchase order of more than $US5 billion from one of the highest-profile customers in the world. Additionally, Amazon’s a more reliable customer than wealthy EV enthusiasts who might turn out to be fickle when deciding between a host of automakers rolling out new electric product lines. 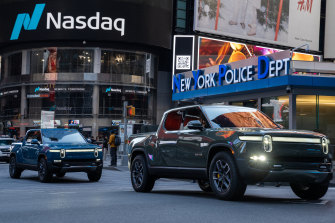 Rivian is valued at around $US100 billion after its opening day on Wall Street. Credit:Bloomberg

Amazon’s validation of Rivian’s products also ensured that competing delivery companies would think about Rivian vans for their own needs. There used to be an old line about conservative decision-makers: “Nobody gets fired for buying IBM.” That reputation as the safe choice could eventually be the case for Rivian vans, too.

Of course, Amazon made sure that it would get its vans before anyone else could, and as part of its agreement, it has the right to buy all the vans Rivian produces for up to six years. The lack of flexibility might eventually be a pain for Rivian, but a multi-billion dollar order backlog would help justify the company’s lofty valuation, too.

On top of the commercial market, Rivian is producing pricey electric trucks and SUV’s for consumers, which happens to be where consumer demand and profits lie in the US auto market. And there’s the hope that over time, software, services and charging stations will provide additional sources of revenue, aligning with Tesla investors’ hopes for that company.

So that’s the case for optimism in Rivian. Amazon — which has plenty of incentive to help Rivian succeed with its 20 per cent stake in the company — and all kinds of other businesses that need vans will see Rivian as the go-to provider. With Rivian unlikely to be able to meet market demand for years, it will have billions of dollars in annual revenue with an order backlog that stretches into the back half of the 2020’s. Over time, their trucks and SUV’s could win over EV buyers as well — an area of the market that Tesla hasn’t yet succeeded in.

The types of investors buying into the vision right now aren’t overly focused on the particulars of EBITDA margins or discounted cash flows — it’s more like a game of high-stakes poker where players think they have a couple good cards and hope their hand improves over time.

Whether the bet succeeds or fails — as in, whether the stock can justify a $US100 billion valuation — remains to be seen. But given the general hype around EVs and Tesla’s own trillion dollar valuation, it’s understandable that investors would find the stock a compelling option.