If you want to binge-watch Bridgerton it will be more expensive than the last season. The latest Star Wars spin-off is getting pricier than the spectacular special effects, and even Apple’s television offering is no longer being given away for a year along with your new phone. The main streaming services are certainly doing their bit to help keep inflation running at a three-decade high. All of them are steadily making watching television more expensive than ever before. 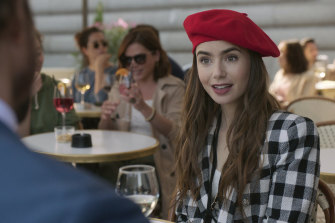 All the main streamers are throwing billions into luring viewers to their service with homegrown shows such as Netflix’s Emily in Paris – and raising subscription prices along the way.Credit:Netflix

But hold on. Sure, we can all understand the rationale for that. The streamers have spent vast sums of money on programming, locked us all into their service, and now want to turn that into profits. And yet there may well be more of a limit to what the market will bear than they realise.

In reality, there is only so much television we can consume; there is not enough quality to justify the vast amounts spent on new shows; and this remains a product that we can get for free elsewhere. Investors have bet huge sums that the pricing strategy will stick – and if they turn out to be wrong, the whole industry will crash.

It won’t compare to filling up your car with petrol, heating your home, or indeed the weekly food shop. Even so, the main streaming services are adding to the pressure on family budgets. The price rises are coming around faster than new seasons of Emily in Paris. Netflix has imposed its second price rise in 18 months, while it is also introducing charges for “password sharing” that allows families to watch from different locations. Disney+ has raised its prices. Even Apple TV is not offering the same kind of free deals that it used to when it was launched. At this rate, anyone subscribing to all the main streaming services is soon going to find the monthly bills going up very quickly.

That was always the plan. The streaming services have spent vast quantities of money on original content to get everyone hooked. With that completed they can then start steadily raising the fees, and start making lots and lots of money. With programming largely a fixed cost, all that extra revenue will drop straight down to the bottom line. It is a strategy that has turned them into some of the biggest companies in the world. Part one has worked a treat. But part two? That is more questionable. In fact, there are three reasons why they may run into more resistance than they had reckoned with.

First, there is only so much television we can consume. OK, admittedly my 14-year-old daughter may be an exception to this rule, especially during the school holidays. But the rest of us have jobs, friends, families, and hobbies that also make demands on our time. In 2010, when most of us merely paid the BBC licence fee, and perhaps a Sky subscription, the average person in the UK spent 242 minutes a day watching the box. Now that has fallen to 192 minutes. For all the vast expenditure, this is an activity that has actually become a slightly smaller part of our daily lives. Measure it by the cost per minute viewed and the price has exploded over the past decade.

In reality, vast sums of money have been invested in the streaming model on the assumption that viewers will be locked in, and then prices can be steadily increased to pay for all that.

Second, there is escalating spending by the big streamers. Each of them has to throw increasingly extravagant sums at the screen to keep viewers coming back, and, even worse, to stop them cancelling their subscription. Netflix is spending $US14 billion ($18.7 billion) a year on its shows, and Disney is spending over $US15 billion. Amazon is spending $465 million on its upcoming Lord of the Rings series alone, and spent $US80 million on The Wheel of Time, which sank without trace. In total, Ampere Analysis estimates that $US230 billion will be spent on content this year. And yet people don’t have more time to watch, or money to spend. The law of diminishing returns, one of the most lethal in economics, has already set in.

Finally, this is a product we can get for free elsewhere. In some industries, people will pay a bit more for the quality of a paid-for product. For example, mineral instead of tap water. But it will never be an unlimited amount. Start charging too much and everyone will just go back to the free version instead.

In reality, vast sums of money have been invested in the streaming model on the assumption that viewers will be locked in, and then prices can be steadily increased to pay for all that. The stock market has bought into that idea, and sent share prices skyrocketing upwards on the promise of big profits down the line. And yet, television used to cost nothing. It is a very rare example of a product that went from being free to being paid for (usually it is the other way around). True, it is unlikely to get back to that.

With so many different shows, and so much investment, there will probably always be programmes we will pay to watch. But it is very dangerous to simply assume that we will keep on paying more and more forever. Sooner or later one price rise will be one too many – and there will be a huge crash when that moment arrives.

Facebook Sends World a Warning With Threat to Australian News

Minecraft 1.18 update rolls out dramatic new changes to the game as you know it