Indonesia’s navy said on Friday that it had found an object emitting a “strong magnetic resonance” during the search for its missing submarine.

The navy dispatched search crews to find the KRI Nanggala 402 Wednesday morning after it missed a routine check-in following a torpedo drill that was being conducted near the island of Bali. Fifty-three people, more than the roughly three dozen people the sub was built to carry, were aboard.

Since then, military vessels from the US, India, Australia, Malaysia, and Singapore have joined the search, with France, Germany, Russia, Turkey, and South Korea also offering help.

On Friday, Indonesian navy chief of staff Adm. Yudo Margono said an object with “strong magnetic resonance” had been found at a depth of between 50 and 100 meters (164 to 328 feet,) the Associated Press reported. 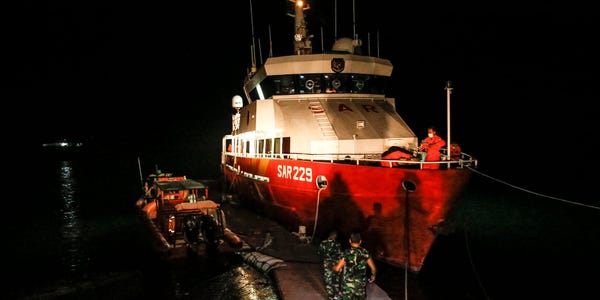 The navy said that its Riguel warship, which is equipped with the high-tech sonar needed to identify the object, had been dispatched to the location, CNN reported.

Rescue crews previously found an oil slick on the surface of the ocean that the navy said could mean the submarine’s fuel tank had been breached.

Time is of the essence as the submarine only has enough oxygen to keep the crew alive until around 3 a.m. local time on Saturday, according to the navy. Jakarta time is 11 hours ahead of Eastern Time.

Experts have warned that the submarine’s hull is at risk of collapse at that depth, and that the vessel is unlikely to survive.

Navy spokesman Julius Widjojono told a local TV network Thursday that the submarine could survive up to a maximum depth of 500 meters.

“Anything more than that can be pretty fatal, dangerous,” he said, according to Reuters.

The cause of the disappearance is still unclear. The navy previously that a power outage may be to blame.

“It is possible that during static diving, a blackout occurred so control was lost and emergency procedures cannot be carried out and the ship fell to a depth of 600 to 700 meters,” the navy said in a statement published by Reuters.