Mesh networking and wireless routers with multiple access points are a complicated category by default. Each unit works in conjunction with the others to create one large wireless network in your house and pull different amounts of bandwidth depending on how you move about your home.

While the potential for headache is all around, we've picked the top mesh systems that are the easiest to install and get setup in no time. Just a few years ago, configuring a wireless network required an ethernet cable and knowing the IP address associated with different manufacturers — no more.

All of these systems can be configured, used, changed, and tweaked using a mobile device, like your phone or tablet. Each also has step-by-step informational screens that walk you through the setup process so you shouldn't need an instructional manual either.

I worked as a home computer technician for a decade and setting up a wireless router was always a pain. I've also written about routers and smart home gadgets for years. We've personally tried these mesh systems out and can confirm each is simple enough that network administrators will be out of side work very soon. 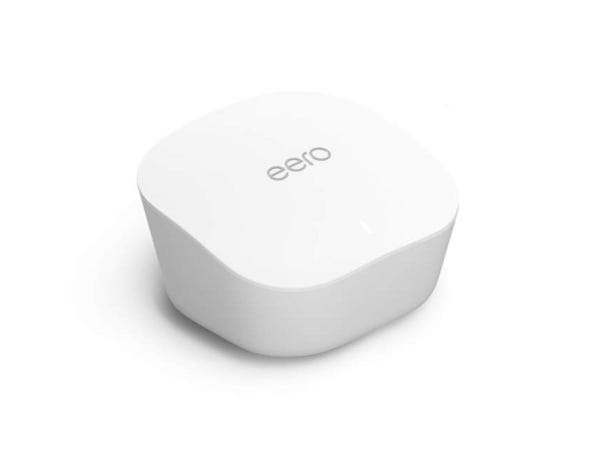 Back in the dark days between when wireless networking first emerged and the present, Eero kicked out a revolution for how consumers can be the masters of their domains.

Eero didn't invent the concept of wireless mesh networking, but Eero greatly improved it and managed to bring homes across the world into the light.

In being among the first to market, Eero has had time to perfect its simplified app design, hardware, and setup process. Many advanced users scoffed at Eero's mobile app setup process that did away with browser-based set up interfaces in lieu of using the device that resided in everyone's pocket.

Eero uses Bluetooth in its router units to detect phones and tablets and get the setup process started. All you need to do is to unbox the units and plug them in. Another area of focus Eero highlights as it walks you through the few setup steps is about router placement.

Eero has long focused on making sure users were getting the best wireless coverage possible from their new mesh system by educating them on the best placement for router units. All of this is done with few words and animated image guides.

Even after Amazon's purchase, Eero largely remains a premium networking product, but there are several configurations of the product that mostly revolve around how big your home is and how much coverage you need. 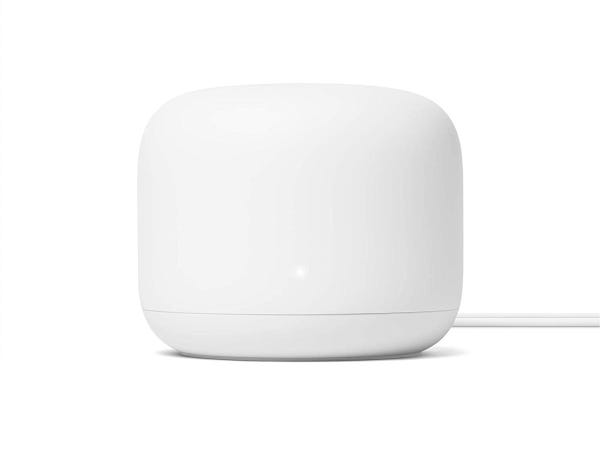 Google's Nest Wifi mesh system has been a staple of ease-of-use since its inception, Google too making one of the first mesh networking routers to only use a mobile app for setup and access to all settings.

The latest Nest Wifi continues Google's home networking efforts from its early OnHub days and attempts to streamline wireless networking, even if you know nothing about it. Not only is it dead-simple to set up with your phone, but Nest Wifi includes convenient smart home features.

The add-on units for the mesh system include microphones and speakers and act as their own Google Assistant speakers. You can ask for the weather, to play music, or even get help with your wireless system. For example, you can perform an internet speed test just by asking, without even having to open your app.

Google recently integrated the Wifi system into its Home app so, in the same way you'd set up a new Home Hub or other assistant, everything is now in one app. This is mostly a good move. The down side however is that there are a lot of settings and options lurking around every corner. Newcomers should not be afraid, but just aware that learning the app's navigation could take a little time to become completely familiar.

Pros: Integrated into Google Home app, easy as setting up a Google Assistant

Cons: Not fully merged with Google Wifi app yet 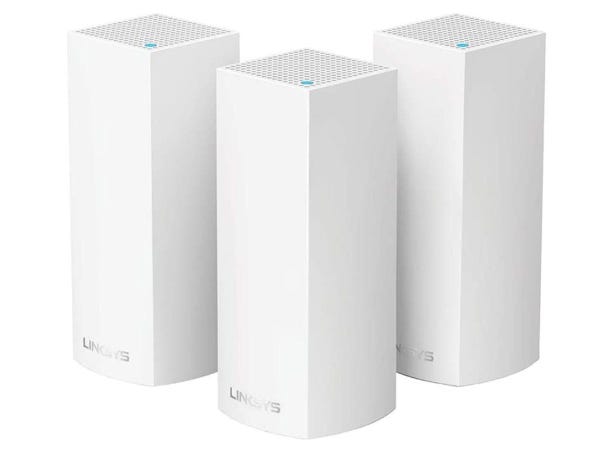 Linksys, now owned by Belkin, has the Linksys Velop mesh networking system which contains one of the easiest setup processes from this bunch.

It too is done completely from a mobile app and doesn't even come with any instructions in the box because of its simplicity. There are several models of Linksys' Velop mesh system, but the difference is really in the hardware capability, such as range and specifications. The app and software is largely the same no matter which one you get. We recently reviewed the AC220 system and it was a piece of cake to get going for the first time.

The longest part of the process is waiting five-to-six minutes for it to find new units and automatically configure them with your existing settings. The only thing you're doing during that time is waiting, so it's not hard.

Not only are Velop mesh systems easy to set up, but they also include a few add-on features for added value. You can add on more advanced parental controls to more finely target what your kids' device can and can't access. You can also pay an additional yearly fee to turn your mesh system into a home motion detector. It works simply through sonar, by detecting differences in the wireless radio waves throughout your home, and then can alert you remotely when there is motion inside your home.

The nice thing about the motion feature is that it acts in a sophisticated manner for security purposes, but doesn't require any more hardware or even any more technical skills to get it going. It's all confined and accessible with the mesh system and app.

Pros: Fun and useful add-on features, variety of Velop systems to choose from 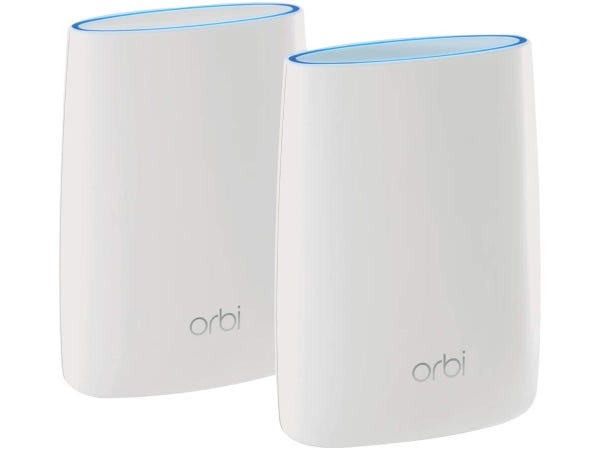 Netgear's Orbi mesh system is largely lauded for its backhaul channels resulting in premium speeds while streaming lots of data — but it's also full of peace of mind with its parental controls.

If you do choose an Orbi mesh system, you'll be pleasantly thrilled with its technical feats, but first and foremost, you should be very happy with its setup and ease of use.

The Orbi app is really paired down on first glance which makes it very simple for the casual interactions and getting started. Like other systems in this guide, Orbi uses a mobile app on your phone or tablet to connect and input the few needed settings like network name and password.

It also includes features like speed testing right up front inside the app as it prioritizes key interactions. Beyond the basics however, Netgear partnered with Disney's Circle for advanced and very easy-to-use parental controls.

Circle knows about the latest apps which you might want to limit and offers a way to give time limits and restrictions for different devices. Kids of different ages will need to be treated differently so that consideration is also built into the Circle settings.

For select Orbi systems you're also able to control settings via your voice. Some have Google Assistant built-in and so you can just ask it to pause your Wi-Fi or enable a guest network if you need to. 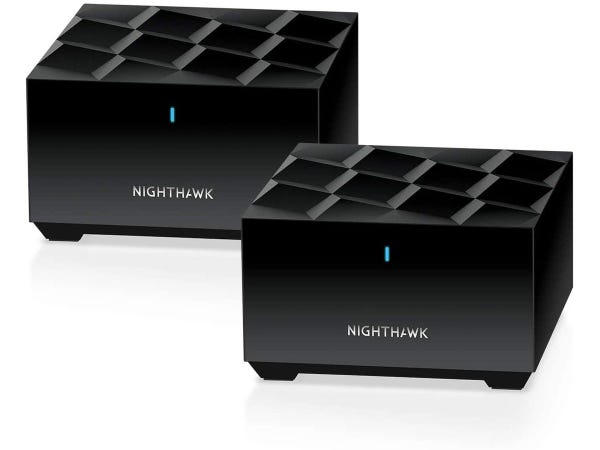 Neatgear's Nighthawk line of routers originated out of its more advanced networking solutions and now includes a mesh option.

Small, pointy black boxes give the Nighthawk mesh system a sleek and modern look, though may be more obvious around a home than other routers. Still, the Nighthawk mesh system with WiFi 6 is definitely for the early adopters, who still want an easy way to manage and set up their wireless routers. WiFi 6 is a rebranding of wireless protocols for the latest generation of specs. It includes four times more connections and has other improvements as gaming and streaming video take over everyone's wireless usage.

The Nighthawk mesh system includes a similar app experience to Netgear's Orbi. Both come from the same company so there's a good bit of overlap which makes it nice if you decide to upgrade from one to the other at some point.

Like the rest of these picks, the Nighthawk mobile app offers a simple and cohesive way to get your wireless system going. The setup process requires inputting only a minimal amount of data, such as giving your network a distinct name and password before you're up and going.

The app also allows access to prioritize devices on your network if you have an important video call you want to make sure gets all the data it needs. On and off toggles provide an incredibly easy way to stop devices from using your internet and connecting to your network if you need to police a rogue user. A handy network map can show which devices are actually connected and using your home internet connection.

Overall, the Nighthawk mesh WiFi 6 system can give next generation-level specs with only a few minutes to get started and set up. At $199 at the time of writing too, the two device mesh system is a steal.

Cons: Advanced security through Bitdefender is an add-on cost