A woman who works for an aircraft company on the West Coast happened to be looking outside her window recently when she thought: “Wouldn’t it be funny to skywrite a giant message attacking Donald Trump?”

When that turned out to be too expensive, she ended up arranging two Florida sky banners instead. They became part of a mini-flurry of anti-Trump messages that hit the news after air restrictions were dropped over the former president’s Mar-a-Lago golf resort, where he’s now living.

“Convict Trump and Lock Him Up” flew over Mar-a-Lago on Friday, and “GOP Grow a Spine and Expel Trump” floated over the Daytona International Speedway during practice races for Sunday’s Daytona 500 race. 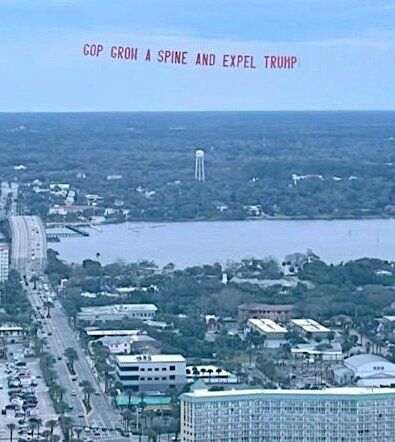 Clearly, they weren’t exactly persuasive, and Republican senators on Saturday acquitted Trump of incitement of insurrection for the storming of the Capitol last month.

“It was expected yet infuriating,” “S” told HuffPost Sunday. Still, the banners were “absolutely worth it,” she added.

“S” — whose identity was confirmed by the aerial company who flew the banners — has asked HuffPost that her name not be revealed because she doesn’t want to be “harassed by Trumpers.”

S hadn’t been politically active in the past, but “2020 really got me, and the pandemic took the cake,” she said. “I couldn’t believe what I was seeing. When Trump started talking about a third term and then started a chant at a rally of ’12 more years,′ I thought: ‘That’s it. That’s a dictator.’”

She added: “My parents immigrated from Cuba in the 1960s. They know what a dictator looks like. Trump and his supporters are authoritarian, completely offensive; they stand for what’s completely contradictory to this country’s ideals.”

When S reached out to Daytona Beach-based Aerial Messages, CEO Remy Colin was “really enthusiastic,” she said. He suggested she lengthen her original message because the price covers 45 characters. “So I added the lock him up part because of what Trump always said about Hillary Clinton,” S said.

While Colin confirmed S arranged the latest banners, two earlier messages over Mar-a-Lago —  “Trump You Pathetic Loser Go Back to Moscow” and “Trump Worst President Ever” — were ordered by “a guy,” whom he declined to name. The London Times reported Sunday that he’s a physician who doesn’t want his identity revealed because “family members fear for their safety.” Nevertheless, he told the Times: ”I want to show people that they can tell Donald Trump what they think of him — and that their emperor has no clothes.”

Colin claimed Aerial Messages is the only company currently flying political banners because of the heated atmosphere in the U.S. just now. The company does repeat advertisements for major companies, and personal messages (including marriage proposals), but also touts on its web page: “Take your political message to the sky!”

He emphasized that Aerial Messages is a non-partisan shop. It’s ready to fly GOP or Democratic messages, anti- or pro-Trump sentiments. The company flew several pro-Trump banners in Florida in the 2016 election which were paid for by Chinese and Russian entities, he noted. Flying banners usually cost $950 an hour, which includes 2 to 4 flyovers, depending on the distance from an airport.

Colin said he gets lots of calls and interest after a political banner appears in the news. People on Twitter have responded to tweets about the banners offering to happily chip into a GoFundMe site for more anti-Trump missives. Others pitched in to help cover the cost of S’s “GOP grow a spine” message.

“I listen to what they have to say, then I explain that we do banners from both sides. One guy was telling me how irresponsible it was to inflame political attitudes with the anti-Trump messages. I’m listening politely, but I’m thinking to myself, ‘What the hell? Your side just stormed the Capitol.’”