When Tesla’s sharemarket value soared through $US1 trillion ($1.3 trillion) this week, it created a new benchmark for capitalising optimism in a market where exuberance, rational or not, has returned.

After falling more than 5 per cent from mid-September, Wall Street has bounced back with a vengeance, with the S&P 500 up about 6 per cent since early this month despite continuing concerns about persistent inflation and a lot of discussion about the potential for the even more pernicious stagflation. 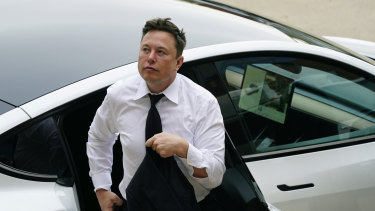 Welcome to the trillion-dollar club: Billionaire Elon Musk got even richer this week as Tesla shares keep rallying.Credit:AP

That recovery to record levels might be due to a spate of very strong earnings from key US companies, with the current quarterly earnings season revealing S&P 500 companies’ results so far that are nearly 50 per cent higher than for the same period last year.

It might also owe something to the internecine wrangling within the Congressional Democrats over the Biden administration’s initially very ambitious and market-threatening, but now dwindling tax and spending plans. The prospect of a rise in corporate taxes to fund the spending has almost disappeared.

Whatever the foundations for the latest surge in equity prices, they are supporting valuations that would only make sense if the US inflation rate of about 5.4 per cent does subside. The S&P 500 companies are, in aggregate, priced at about 26 times current earnings, 21 times prospective earnings and three times their sales.

Within the benchmark index, the so-called “FAANG” stocks – Facebook, Apple, Amazon, Netflix and Google – are trading on an average price-earnings multiple of about 42 times and almost seven times their sales. It is those stocks, whose value relies on capitalising their projected cash flows well into the future, that are most sensitive to inflation and the prospect of interest rates rising.

Yet even within that group, Tesla stands out.

When it joined the trillion-dollar market capitalisation club this week Elon Musk’s group’s valuation hit an extreme 327 times earnings, and it was valued at more than 21 times its sales. Apple, valued at $US2.5 trillion, trades on a price/earnings ratio of about 29 and 7.24 times its sales.

The catalyst for the surge in Tesla’s value this week – it has risen by more than $US110 billion — was an order from Hertz for 100,000 Teslas at their retail price. Even Musk was puzzled by the market reaction, given that Tesla’s issues have been on the supply side rather than on any concerns about demand.

The Hertz order is worth about $US4.2 billion of sales, which puts the market response in perspective. Musk’s personal wealth jumped $US36 billion in response to the deal.

The oft-cited stat about Tesla is that it is now worth more than the next nine auto manufacturers combined. Another is that it produces about a 10th of the vehicles that Toyota does, but has about four times Toyota’s market value.

By valuing Tesla so aggressively against the major carmakers the market is effectively saying that Tesla will capture almost half the value attributed to the industry in future. That’s a bold call.

Tesla plans to grow its production by 50 per cent a year over the next few years and has speculated that it might eventually produce 20 million vehicles a year, so there is volume upside.

By valuing Tesla so aggressively against the major carmakers the market is effectively saying that Tesla will capture almost half the value attributed to the industry in future. That’s a bold call.

It also generates higher margins than conventional carmakers – in the September quarter its gross margin was almost 27 per cent, or about 5 percentage points higher than Toyota’s — so those potential volume increases could be leveraged into the group’s profitability.

Musk has created something other than a conventional auto manufacturer, beyond the power train. Tesla is as much a software business and potentially a subscription software business as it is a carmaker, and will become even more so if and when its autonomous driving software is glitch-free and accepted by regulators.

It is therefore possible to value Tesla as something of a hybrid – a growing auto manufacturer targeting the increasingly desirable EV segment, and a software company. On that could be overlaid something for its brand value and Musk’s personal appeal to the hordes of retail investors who have dominated trading in the stock, along with the structural trend towards electric cars generated by the global push to reduce carbon emissions.

Yet even with all those ingredients it is difficult to rationalise Tesla’s multiples relative to the 21st century giants among the FAANG stocks, other than to see it as remaining something of a meme stock in a market where the retail investors who were so active earlier in the year have been less visible in recent months.

Tesla is an extreme example of the uncapped optimism still capitalised into sharemarkets at a moment when the risks – particularly the risk that inflation becomes entrenched at high levels, forcing central banks to raise interest rates aggressively – remain obvious and threatening.

It’s by no means the only one. The whole market remains vulnerable to bad news – but apparently investors are completely unconcerned by that susceptibility, despite the volatile environment of energy crises, stalemate politics in the US, unpredictable and abrupt shifts in policies and a property crisis in China, global supply chains in chaos and the continuing effects of the pandemic.