Big investors love many things about Tesla. Volatility isn’t one of them.

Despite a trillion-dollar valuation, pole position in the electric-vehicle business and entry to the S&P 500, the world’s sixth-largest listed company is subject to greater swings than any other US megacap technology stock, with 21 daily moves of at least 5 per cent to the upside or downside this year. 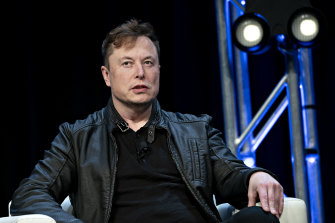 Tesla’s volatility is proving to be a problem for big investors.Credit:Bloomberg

“It is not a name we would recommend to our clients,” said Edmund Shing, BNP Paribas Wealth’s chief investment officer, citing volatility brought about by high levels of interest among retail investors.

Its latest sharp about-turn in the stock, without any fundamental catalyst, highlights the unpredictability. Tesla shares have jumped by around 7 per cent over the past two sessions, despite a Monday postmarket disclosure that chief executive officer Elon Musk had exercised options and sold more shares. The string of sales by Musk had caused the stock to fall about 15 per cent since his Twitter poll asking followers whether he should sell shares, wiping nearly $US200 billion off the company’s market value.

Tesla’s volatility has frequently spilled over to other EV stocks, making it a hallmark for the group. The most recent examples are a five-day rally in newly public Rivian Automotive, taking its valuation past Volkswagen on Tuesday, and a 19 per cent surge in Lucid Group’s shares after the company said it remained confident in its ability to produce 20,000 units in 2022.

Still, it’s hard to completely ignore a stock that’s up 47 per cent in 2021, after surging more than eightfold the year before.

Shing recommends gaining exposure through exchange traded funds or other passive investing methods. “We prefer our clients to take indirect exposure that way, so as to benefit from some diversification and the offset to volatility that other stocks can provide.”

Indeed that’s been the general narrative in the latest regulatory filings from institutional investors. Hedge funds have increased the amount of exchange-traded funds in their portfolios in the third quarter, while decreasing their exposure to single stocks, according to 13F filings.

With a 2 per cent-plus weighting on the US benchmark index, Stoeckle had to look beyond Tesla’s frequent wild swings and buy in, he said by phone. 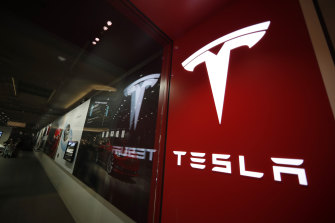 Despite its recent slump, Tesla shares have gained more than 40 per cent this year.Credit:AP

At the other end of the spectrum, amateur traders have been gobbling up Tesla stock through call options – used to position for gains in stocks. According to Goldman Sachs., Tesla and Amazon.com. represented more than half of the single-stock options traded in early November.

But Musk’s near $US8 billion stock sale might act as a deterrent, at least for now. “The recent fall might have put off some retail investors,” said Jim Dixon, a sales trader at Mirabaud Securities. The alternative for them is Rivian Automotive, he said.