Tennessee Gov. Bill Lee says the damage from the Nashville explosion was ‘enormous,’ adding that he spoke with President Trump on Sunday and that it appears federal disaster assistance ‘will be coming shorty.’

After speaking with President Trump Sunday, Tennessee Gov. Bill Lee said it "appears" Trump will agree to an emergency declaration request after a Christmas Day bombing destroyed buildings and businesses in downtown Nashville.

An emergency declaration under the Stafford Act would allow federal money to flow to state and local governments to assist in the recovery. The president is required to tell Congress if more than $5 million is needed, according to the Federal Emergency Management Agency.

"It appears that that will be coming shortly and we'll have some assistance to help begin this rebuilding process," Lee told "America’s Newsroom." "So we're very grateful to President Trump for his response to that request."

In a letter requesting the emergency declaration, Lee said that an "effective response is beyond the capabilities of the state and affected local governments." Officials have said that around 41 businesses were damaged when police say Anthony Quinn Warner, 63, of Antioch, Tenn., detonated his RV near an AT&T central office, shaking the city and sending plumes of dark smoke into the air just before 6:30 a.m. local time. 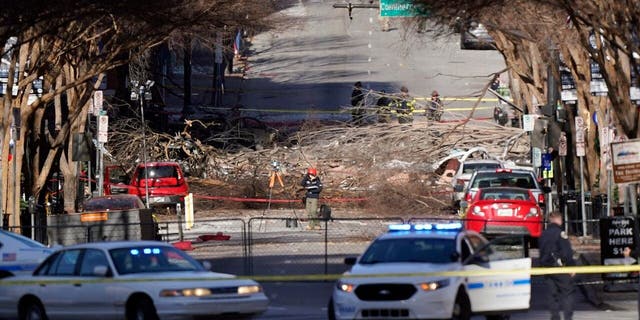 "The damage is enormous. It was an indescribable blast, and it's destroyed businesses all up and down that downtown block," the governor told Fox News’ Jon Scott.

"Small business owners have had a very difficult year to start with," he said. "When you see the damage down there, you see, I see business owners with a new struggle, but we are, starting today, we are beginning to determine ways that we are going to rebuild."

ANTHONY QUINN WARNER: WHAT TO KNOW ABOUT THE NASHVILLE BOMBING SUSPECT

One of the business owners affected was Pete Gibson, who told "America’s News HQ" over the weekend that his Pride and Glory Tattoo store is "gone" after the bombing.

"It’s been quite a rollercoaster and it just doesn’t stop, it seems like," Gibson said of the year 2020.

AT&T said Monday that the majority of their telecommunication services have been restored after three days of outages for some customers in Tennessee, Kentucky and Alabama.

The emergency declaration request has been supported by Tennessee’s Republican senators, Lamar Alexander and Marsha Blackburn.

Slack is booming despite recession. CEO on this 'time of turbulence'

Latest Posts
Gold Futures Settle Notably Higher As Dollar Retreats
DOJ Won’t Seek To Terminate Or Modify Consent Decrees Governing Music Licensing
Mayor Demands Tighter Security in D.C. for Biden Inauguration
Records Prove The Obvious: Fervent Trump Fans Fueled The Capitol Siege
Yellen Runs Into GOP Resistance to ‘Act Big’ Call for Stimulus
Recent Posts
This website uses cookies to improve your user experience and to provide you with advertisements that are relevant to your interests. By continuing to browse the site you are agreeing to our use of cookies.Ok