ThinkTV data obtained from an industry source found the ViacomCBS-owned entity grew its share of the free-to-air (FTA) advertising market by four points to 20.5 per cent, a recovery from last January when it suffered one of its worst months ever. 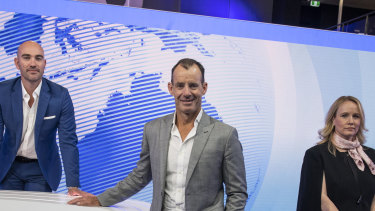 Nine Entertainment Co, publisher of this masthead, had the biggest share of market dollars with 42.7 per cent in January, while Seven West Media had 36.9 per cent.

Ten was the only commercial network to grow its share for the month, with Seven falling from 40 per cent the previous year and Nine dipping from a 44.7 per cent share. Ten's revenue was up 12 per cent compared with the previous year, chief sales officer Rod Prosser said. Nine and Seven declined to comment.

In its last year with the Big Bash League before a multimillion-dollar deal was signed with Foxtel and Seven, Ten had a 27.9 per cent share of advertising dollars, compared with Nine's 32.5 per cent and Seven's 39.6 per cent.

But the following year, Ten fell to a 16.4 per cent share of advertising dollars, one of the worst performances in its history.

The fall in revenue was driven by multiple factors. At the time Ten was in the process of bringing sales in-house after years of working with Multi-Channel Network, now known as Foxtel Media, and it had lost the rights to the Big Bash League, which was a major driver of revenue and ratings in summer.

"It was a not so perfect storm for us," Mr Prosser said. “To drop to the share we did, really took me a bit by surprise. I had not seen a share number like that for a long time.

“It would have been one of the lowest since I had been at Ten. It was pretty terrible.”

Slowly, the network has gained momentum. Since October Ten has grown its share of the market. ThinkTV data for the 2019 year shows the total TV market fell by 4.8 per cent to $3.9 billion, while in the first half of the new financial year, television revenue is down 5.9 per cent to $2 billion.

But for the first half of the financial year, Seven had 38.8 per cent of commercial free to air revenue, compared with 38.7 per cent for Nine and 22.5 per cent for Ten.

“The sales team found their operational rhythm and really had got closer to agencies and clients," Mr Prosser said.

He said Ten's return to growth is proof a sport is not needed in the summer months. In January, Ten's ratings grew by 8 per cent compared with a fall of 4 per cent in the commercial TV market.

“Everyone said you need sport in summer – and truthfully, five years ago and while we were in BBL, I would have said the same thing," he said.

“What we have proven is you don’t need a sport to create that launchpad, you can get that with  strong entertainment."

Ten's entertainment line-up includes I’m a Celebrity … Get Me Out of Here, The Bachelor Australia, and Dancing With the Stars.

There's no excuse for using COVID to shut down schools again

State pension age: How to check yours and find out when you’ll get free bus pass