Sydney Airport has reported a $97.4 million loss for the six months to June 30 as the COVID-19 pandemic continues to cripple the travel industry.

The result – driving deeper into the red after a $53 million loss in the same half last year – came as revenue fell 33 per cent to $341 million, a drop of almost 60 per cent compared to its pre-COVID first-half result in 2019. 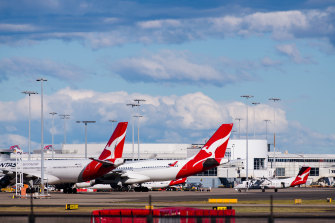 “It was a challenging six months, but we were encouraged to see passenger traffic rebound strongly every time borders were open,” Sydney Airport CEO Geoff Culbert said.

“We’re optimistic that this trend will repeat itself as the vaccine program gains momentum and we see a sustained easing of restrictions.”

The company on Monday palmed off a revised $22.8 billion takeover offer from a group of superannuation funds, saying the bid undervalues the airport and is “opportunistic” at a time when COVID-19 continues to batter the travel industry.

Defending its position, Sydney Airport’s board has pointed to Australia’s quickening vaccination rollout in recent weeks and government plans to start easing travel and other restrictions when certain vaccination targets are met.

The company did not declare a dividend.

Parler created a platform for conservatives by burning the Silicon Valley script. Inside the rapid, mysterious rise of the 'free speech' Twitter alternative.

Congress could soon get answers about Epstein's suicide