A surge in online sales will help lift department store Myer to an expected full-year profit of more than $55 million for 2022, helping the retailer buck concerns about a national slowdown in spending.

Shares in the retailer jumped on Tuesday morning and closed up 21.3 per cent to 48.5 cents after the company told investors its total sales were up by as much as 12.7 per cent for the year and would come in at close to $3 billion. 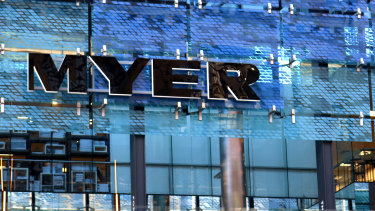 The business is expected to bank a net profit after tax for the year of between $55 million and $60 million, an increase of between 86 per cent and 103 per cent on last year, excluding the impact of JobKeeper payments on 2021 earnings.

The numbers put Myer on track for its strongest financial result since 2017, when the company reported a net profit of $67.9 million. In 2020, Myer swung to a net loss of $11.3 million.

Chief executive John King said all sales categories grew in 2022 despite the retailer losing more trading days due to COVID restrictions than the previous year.

“The momentum in the second half in terms of sales growth both in-store and online, profitability and strengthening of our balance sheet places us well as we go into the new financial year,” he said.

The group’s online channels helped power the strong result, with sales up by between 32.5 per cent and 42.4 per cent for the year and worth between $715 million and $725 million in revenue.

Myer’s full-year financial results will be presented in September, when its earnings figures will be finalised and confirmed.

The business says it expects to be in a positive net cash position of more than $155 million.

Morningstar analysts say the company would be fairly valued at 70 cents, more than 40 per cent higher than 49 cents shares vaulted to on Tuesday.

Its equities team said in a note earlier in the year that while the company could be well-positioned to take advantage of a return to bricks-and-mortar retail, Myer’s online growth is key to growth.

“While we expect the online channel to grow faster than the brick-and-mortar channel to fiscal 2030, and Myer to partially capture its share of this e-commerce growth, Amazon Australia will pursue its piece of the pie.”

Myer is the second retailer to reveal strong earnings before the coming company reporting season – last week JB Hi-Fi surprised the market with stronger than expected sales and profit figures.

The electronics retailer booked record sales and profits for the 2022 financial year as online sales surged at the same time as bricks-and-mortar stores reopened.

The results come despite analysts’ predictions that non-discretionary retailers should already be seeing a spending slowdown, thanks to a cocktail of rising interest rates and inflation.

Retail trade data released by the Australian Bureau of Statistics this month showed department stores had the biggest jump in sales across all categories in May, up 5.1 per cent compared with April.

Australians spent $1.8 billion in department stores in May, compared with a low of $1.2 billion in April 2020, when coronavirus restrictions first took effect in Australia.