For decades, the politics of abortion have played out through proxy fights over judicial nominations and at the state level, as conservatives sought the proper alchemical formula to get a Supreme Court with a conservative majority to overrule the 1973 Roe v. Wade decision that legalized abortion.

This week, the court allowed a Texas law to go into effect that incentivizes private citizens to sue, for damages of at least $10,000, anyone who helps a woman get an abortion in the state after about six weeks of pregnancy. That means that era is now over.

Before, the politics of abortion played out in the undemocratic and elitist realm of the courts. Throughout this period, Democrats and liberals have deferred to the Supreme Court, hoping that these unelected judges would do the right thing. Polls consistently show Democrats have a favorable view of the court, despite it having a Republican-appointed majority since 1969. The deference to the court may have been necessary to protect women’s right to choose their own medical care, but it also set the key tenets of democratic responsibility and accountability aside.

The era of deference to elite institutions that hide political decisions from democratic legitimacy and accountability should have ended years ago. If there is ever going to be a time for liberals to stop loving the court and start embracing popular democracy, the court’s Texas indecision and the imminent demise of Roe ought to be it. 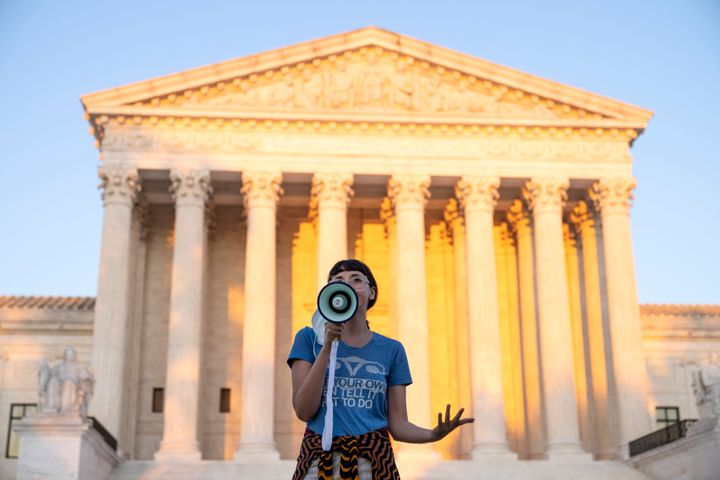 The Supreme Court’s decision to let the Texas law go into effect is the result of the Republican Party’s theory of unpopular minoritarian governance. The three justices who cast the deciding votes ― Neil Gorsuch, Brett Kavanaugh and Amy Coney Barrett ― were all appointed by Donald Trump, who won the White House in 2016 despite losing the popular vote by nearly 3 million votes. They then made their decision in Trumpian fashion, claiming there was no existing federal judicial doctrine to judge such a novel law despite a lower district court finding and using such an existing doctrine.

No vote was more important than Barrett’s, the replacement for the late Justice Ruth Bader Ginsburg, who chose not to retire in her 80s after multiple bouts of cancer and be replaced by President Barack Obama in 2013 or 2014. That cancer took Ginsburg weeks before the 2020 election, allowing Trump to replace her with a third opponent of Roe v. Wade.

Barrett’s appointment is crucial now because it has made Chief Justice John Roberts somewhat irrelevant. Roberts is himself a hard-line conservative and abortion opponent, but he has steered the court he leads in a manner that maintains a tenuous public perception of the court as above politics ― even as he intervenes to help Republicans politically.

This careful stewardship has, until now, kept the court’s conservative majority from taking big swings on issues that would generate the most heat, with abortion the biggest among them. In particular, Roberts eyed eliminating Roe’s assurance of abortion rights without actually overturning the decision, in much the same way he meticulously gutted the 1965 Voting Rights Act. He preferred to leave both in a vegetative state, rather than killing them outright.

It’s telling, then, that Roberts sided with the liberal rump of three to enjoin the Texas law from going into effect. Clearly, he felt that this law undermined his carefully crafted plan.

While Roberts promised to act like a baseball umpire in his confirmation hearing, just calling “balls and strikes, and not to pitch or bat,” he ran the court’s conservative agenda like an old-school, small-ball National League team ― advancing its preferred policy direction with singles, sacrifice bunts and stolen bases.

But the message from the five other conservative justices, including all three Trump appointees, in allowing the Texas law to go into effect is a preference for a more modern form of baseball: Hit more home runs. They’ll have that chance almost immediately, as the court’s fall session features a direct challenge to Roe via an anti-abortion bill passed by Republicans in Mississippi. 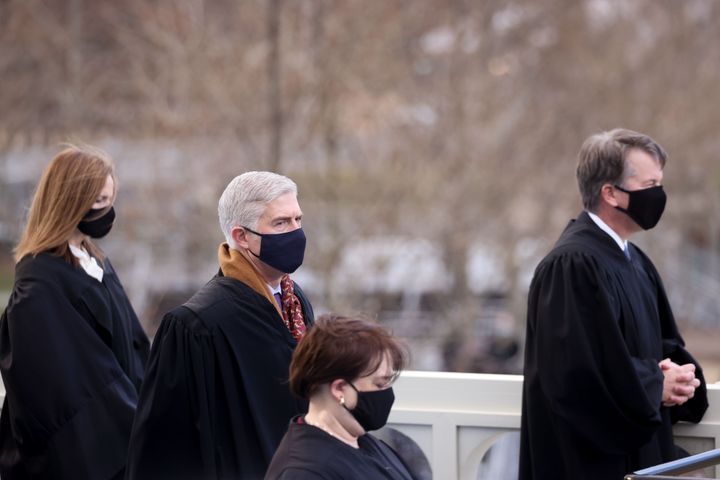 In response to the Republican Party’s reliance on unpopular elections, voter suppression and anti-majoritarian institutions like the Supreme Court, Democrats should do the opposite: Embrace democracy and majority rule. They need to take the politics of abortion out from the no-cameras-allowed Supreme Court and into the public sphere by passing laws with a simple majority of votes.

Democrats had this chance in 2009 after Obama promised that codifying Roe v. Wade’s abortion rights into law would be “the first thing I’d do as president” on the campaign trail — but then, he and congressional Democrats did nothing. It was not Obama’s “highest legislative priority,” he said in 2009. Abortion politics would remain the realm of the elitist courts, which provided a political advantage to Republicans.

Trump won evangelicals to his side in 2016 with a promise of anti-abortion justices despite his history as a depraved adulterer known to brag about his sexual assaults, rank women by their looks and parade his teenage daughter as a sex object. Trump’s Democratic opponent Hillary Clinton, meanwhile, could not juice turnout using a pitch that it was vital to put her in office to fill an open Supreme Court seat that would have given Democrats their first 5-4 majority on the court in nearly half a century.

Today’s Democrats sound at least somewhat different. Speaker Nancy Pelosi (D-Calif.) announced that the House will vote on a bill to codify Roe’s legalization of abortion into law. Even if the House passes such a law, it faces the threat of a filibuster in the Senate.

Sens. Kirsten Gillibrand (D-N.Y.) and Ed Markey (D-Mass.) have already called for the Senate to discard the chamber’s 60 vote filibuster rule to allow the bill to pass with a simple majority.

But some pro-choice groups have questioned whether ending the filibuster would aid their cause or allow Republicans to enact abortion restrictions with just 50 votes. This mirrors the argument made by Sen. Kyrsten Sinema (D-Ariz.) for why she opposes changing the filibuster rules.

The fear is that majorities elected to govern would be able to implement their agenda, as is done in almost every other democratic country in the world. Horror! But what if that agenda is so unpopular that they wouldn’t do so? 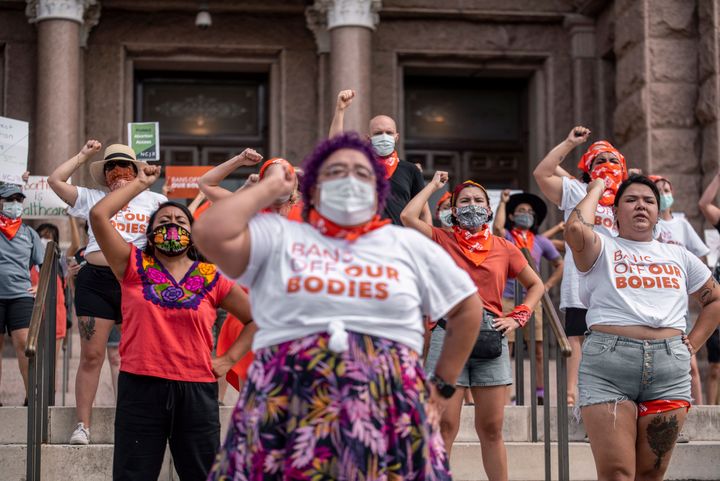 Support for Roe v. Wade has not fallen below 51% approval in Gallup polling in the past 30 years and has routinely hovered near or above 60%, while opposition to Roe has never exceeded 36%. Most other polling shows similar splits. The AP/Votecast 2020 poll found that just 3% of voters listed abortion as their top issue, and they voted for Trump 89-9. That same poll found 60% support for Roe v. Wade and 40% opposition. Polls also show that Americans do support some kind of limits on abortion access, but not too many.

It’s hard to say exactly how this would shake out, but the tepid, if not muted response by Republicans and their media organs to the Texas law is rather telling about how they see the politics.

There was no cheering from Republican senators, nor press releases ready to flood reporters’ inboxes. Senate Minority Leader Mitch McConnell dismissed the court’s decision as simply “highly technical.” Many Texas Republican congressmen have not said a word, according to BuzzFeed News. And Fox News hardly mentioned the court’s at all for all of Thursday.

Republicans have already found it hard to enact their agenda with congressional majorities. They ​​were incapable of passing their unpopular bill to repeal the Affordable Care Act in 2017 with just 50 votes. They were also barely able to pass their unpopular regressive tax cut bill that same year.

Limiting the abortion fight to a proxy war of judicial nominations and the Senate filibuster simply provides easy excuses for senators to take positions without having to really and truly show if they mean it. Getting rid of both, preferably before the Supreme Court overturns Roe entirely, makes the stakes clearer and provides more direct democratic accountability.

And if the court wants to find some creative use of the Commerce Clause to rule a law passed by Congress legalizing abortion unconstitutional, there are other democratic means of response, including adding justices to the court or stripping the court of jurisdiction on such matters.

The question is whether Democrats see this need to embrace democracy and stop ceding politics to unaccountable elites, or if the end of Roe is just another opportunity for desperate fundraising emails.