The head of Australia's consumer watchdog Rod Sims has assured shoppers there are currently no signs of price gouging across supermarkets in response to the coronavirus, though noted it was something he was keeping a close eye on.

Mr Sims, who chairs the Australian Competition and Consumer Commission (ACCC), told The Age and The Sydney Morning Herald he was not seeing any price gouging evidence "at this stage". 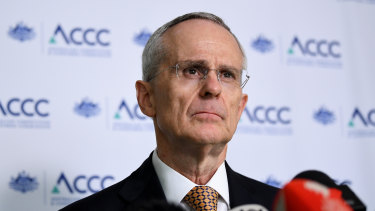 Consumers have been raising concerns on social media about the price of some products across retailers, primarily fresh fruit and vegetables. Prices per kilogram for vegetables such as capsicums and broccoli have been reported as high as $16 per kilogram.

"We've had a lot of feedback that prices, particularly of fresh produce, have gone up," Mr Sims said.

"The story we're getting is that's due to flow on from the drought and the bushfires, and also the continual de-stocking when it comes to products such as meat. So that all seems logical."

Supermarkets had not altered their margins, Mr Sims said, though the watchdog is putting additional scrutiny on supply chain "middlemen", such as wholesalers or milk processors.

"We want to check if prices are going up a bit that it's really the farmers who are benefiting," Mr Sims said.

"If prices are going up and there's no change in margin at supermarkets or wholesalers and it's all benefiting farmers, that's okay. I don't think anybody's going to begrudge the farmers making a bit more money at the moment or recovering past losses."

A spokesperson for Ausveg, the peak industry body for Australia's vegetable growers, also backed this explanation, saying there had been some reduced supply due to drought and "seasonal fluctuations" in different production regions which had led to a temporary increase in prices.

"The price of fresh produce is, like many commodities, set by supply and demand. As availability of fresh produce increases and demand resumes to levels that we usually expect for this time of the year, prices will lower to reflect this," the spokesperson said.

I don't think anybody's going to begrudge the farmers making a bit more money at the moment or recovering past losses.

Price fluctuations in non-fresh produce have also been reported by consumers, though the changes are not as drastic. However, supermarket heads have explained this is again due to an unprecedented level of demand, not intentional price gouging.

Con Sciacca, the chief executive of independent supermarket chain Foodland, told The Age and The Sydney Morning Herald cheaper brands have been run off shelves thanks to weeks of panic buying, leaving shoppers to choose "artisan" varieties, leading to a more expensive shop.

Supermarkets have also been limited in the number of discounts they can run throughout stores, as the unprecedented demand has left them without any stock to run promotions on.

"The reality is if someone tried to move through an unsubstantiated price increase in this climate, they would be challenged to justify that," Mr Sciacca said.

A spokesperson for Woolworths also confirmed the company had not been able to "support as many specials as we have in the past" due to demand issues.

Mr Sims said he was overall "extremely pleased" with the conduct of Australia's supermarkets and their efforts in getting products to consumers. However, the ACCC is still keeping its eye on any potential price gouging, especially across online platforms.

"We're watching out a lot more than we normally do for people taking advantage of the situation and pricing excessively, [like] charging extortionate amounts for sanitiser," he said.

"To some extent, that's not against the law, but what we can do is call them out."