Southern Cross Austereo has posted a revenue decline for the first half of the financial year as difficult advertising spending conditions continue to hurt its television and radio divisions.

The company, which runs the Triple M and Hit radio networks, posted revenue of $308.1 million for the half year, while earnings before interest, tax, depreciation and amortisation (EBITDA) fell by 27.7 per cent to $67.5 million. 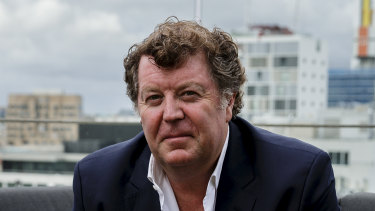 Underlying net profit after tax was $28.6 million, down 31 per cent from the previous corresponding period.

In October, Southern Cross released a trading update warning first half earnings would fall as much as 27 per cent, affected by the "volatile" advertising market. At the time, Southern Cross forecast first-half EBITDA of between $60 million to $68 million before accounting adjustments for leases.

Underlying EBITDA – which excludes the adjustments for leases – was $62.2 million, down 26 per cent from the previous corresponding period.

The fall in revenue was spread across the business, with audio down 8 per cent to $210.9 million for the half year, and television revenue falling by 8.1 per cent, to $96.2 million.

Southern Cross' results follow a major restructure in December, which affected about 90 roles or 3.6 per cent of staff.

Chief executive Grant Blackley said the business would be remained focused on resiliency and investment in "personalised audio products".

"SCA's strategy has two clear pathways. We will ensure our core business is resilient, effective and efficient at delivering compelling content for our audiences and demonstrable positive returns for our advertisers and other pbusiness partners," Mr Blackley said.

"At the same time, we will invest in developing new on-demand and personalised audio products to build profitable and sustainable revneue streams for the future."