Just a few months after going head-to-head with an Amazon-backed rival to claim her third term on the Seattle city council, Kshama Sawant has proposed a new tax on the trillion dollar giant and other large Seattle businesses, which she says will “stop at nothing” to try to defeat progressive proposals like this one.

The proposal, which was unveiled last week, would involve a 1.7% payroll tax on the top 3% of companies (based on their payroll) operating out of the city. Sawant estimates the tax will impact about 825 companies, each with about $7m or more in annual payroll. All non-profit organizations, public employers and grocery stores would be exempt.

How socialist Kshama Sawant triumphed over Amazon in its own backyard

“On the whole what we have achieved is exactly what we want to achieve, which is that it’s a truly progressive tax, meaning it falls only on the very very largest corporations,” Sawant told the Guardian.

Amazon has a long-history of tax management. It paid just 1.2% in federal income tax last year – a three-year high for the company – and has angered some critics with its tax policies.

In Seattle the new tax is expected to raise $300m each year. In a city that has the fourth highest rate of unsheltered homeless in the US, according to a 2019 federal report, 75% of the money from the tax would go toward building thousands of affordable, publicly owned homes. The rest of the funds would go toward converting homes that use oil or gas to clean electric energy.

Sawant, a member of the Socialist Alternative party and former tech worker, introduced a similar tax on big businesses in 2018. The Head Tax proposal would have implemented a per-employee tax on corporations making more than $20m each year.

Although the nine-member council initially unanimously approved it, after Amazon, Starbucks and other locally based companies contributed financially to a campaign to kill it, called No Tax on Jobs, all but two council members voted for repeal (Sawant and Democratic council member Teresa Mosqueda voted for the tax). 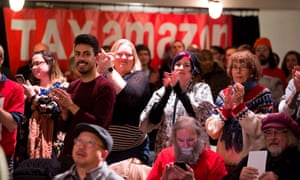 Now Sawant has reignited that fight at a much larger scale. The new proposal would likely impact at least 200 more businesses than the previous tax and potentially raise more than six times the funds. And with a better sense of what can befall a proposal like this one at the 11th hour, the council member is also working to build up more momentum at the grassroots level.

“We need an even more powerful movement to withstand not just the pressures, but the bullying and threats of big business,” she said. “They will stop at nothing.”

Sawant was elected six years ago as the first socialist on the Seattle council in almost 100 years. She won her second re-election campaign in November, after a hard-fought battle against Amazon-backed candidate Egan Orion. The corporation, which is headquartered in Seattle, funneled $1.5m into the local city council elections by way of the Seattle Metropolitan Chamber of Commerce’s political action committee, which supported Orion and six other candidates considered to be business-friendly (all but two of these candidates lost their races).

Amazon did not immediately respond to a request for comment.

Throughout her campaign, she frequently referenced her plan to revive her fight for a tax on big business. But she said the specific proposal just announced came out of several months of deliberations among hundreds of people from the Socialist Alternative party, Democratic party and renters’ rights organizations.

Seattle mayor Jenny Durkan, a Democrat, said in a recent statement that while she does believe big businesses should contribute more financially to addressing the city’s challenges, “this proposal that is six times bigger than the failed council head tax proposal is not a plan that I can support”.

“Being progressive means actually making progress. While slogans are nice, a failed, divisive fight that is high on rhetoric but low on outcomes, or one that funds lawyers instead of housing, is not an actual solution,” she said.

Mayor Durkan helped to put together a bill introduced last month in the Washington state legislature that would authorize King county, which includes Seattle, to implement a 0.1 to 0.2% payroll tax on big businesses. But there has also been a recent push to add a clause barring cities from enacting similar big-business taxes. 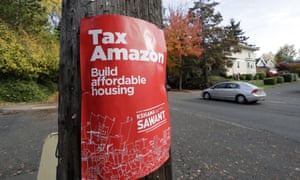 Sawant said such a move would be “devastating” and “a huge betrayal of working people”.

Alicia Teel, spokesperson for the Seattle Metropolitan Chamber of Commerce, said that while lawmakers at the state level are working to develop a regional approach to help increase funding for housing and homelessness, “councilmember Sawant is spending her time printing posters and calling press conferences”.

Sawant plans to formally introduce the tax to the city council later this month. She said she also will likely hold district meetings throughout the city, along with rallies and marches to help spread awareness about the tax.

At the same time, she is working to introduce this tax to the Seattle council, there is also a group working on a corresponding ballot initiative. The idea is that if her proposal doesn’t get through the council, they can take the issue directly to the people.

Sawant was recently charged with violating the city’s ethics and elections code for promoting the initiative through links posted on her city council website. She said she was very surprised with the complaint, since the ballot initiative hadn’t been officially submitted or even written.

“We did not in any intentional way break any rules, and I’m looking forward to meeting with the commission to resolve this issue,” she said.

Newt Gingrich: Trump will be remembered as 'one of the most disruptive figures ever to lead' US

Federal student loan interest rates could drop to lowest levels ever: Here’s why