So what keeps Seven West Media boss James Warburton up at night other than a shrinking advertising market and the prospect of a big fall in full-year profit? I’d venture several things.

First would be the coronavirus and its potential to compromise the Tokyo Olympics in July if headline athletes boycott the event – because many advertisers would follow. 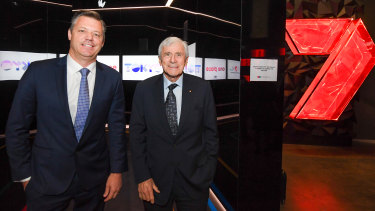 Second, Warburton will be sweating on the outcome of an Australian Competition and Consumer Commission (ACCC) decision that would allow Seven West to offload its magazine division and pocket a much needed $40 million in cash. The ACCC has already raised concerns and is due to deliver a verdict in April.

Seven is elbow deep in efforts to empty as many logs as it can to get its debt down in order to ensure it doesn't get dangerously close to breaching any of its bank lending covenants.

Seven Studios – which produces content for the network and sells it to third parties – is in Warburton’s sights because its high cost base relative to revenue (investment advisers have already been appointed to find buyers).

Other divestment targets are said to include stakes in digital lender SocietyOne and digital marketplace provider Airtasker.

The trouble is that Warburton can’t control what the ACCC decides. But he can, and he has, doubled down on taking costs out of the business.

The struggling performance of Seven’s main operating business isn’t providing Warburton with much help in achieving the aim of getting the balance sheet in order. Nor are the shareholders receiving any sugar – with dividends suspended and the share price in freefall.

Add to those woes yet another round of impairments to the value of the intangible television licences and some more onerous program contracts – relating to cricket and provisions against the Olympics. One-off impairments dragged the half-year result into a hefty $67 million loss.

But even after looking past those items Seven West’s underlying profit was still down about 20 per cent.

It is the Australian advertising market that has provided the media group with a cyclonic headwind. It was down 8.5 per cent in the six months and metropolitan television advertising across the board was down 7 per cent, according to numbers produced by KPMG.

Digital advertising growth was one of the few bright spots in Seven's half-year earnings but is still too small to move the dial for Seven West.

To be fair the industry’s shocking advertising numbers infected other media stocks. Nine Entertainment’s shares were down by 7.36 per cent by mid afternoon while Prime Media fell 9 per cent.

Some of this will reflect the softer economic conditions but a large part can be attributed to the structural decline of free-to-air television as audiences disperse to other distribution channels.

It feels like the come to Jesus moment that print media experienced 10 years ago – even though the trends in television have been apparent (obvious) for more than five years.

However, Seven was late to the party to transition to a more digital focus.

It has been too busy concentrating its attention on trying to stay a few points ahead in the ratings game and has loaded up with expensive marquee sports program contracts and (dare I say it) the Olympics.

Seven’s debt has provided Warburton with a heavy millstone in his attempts to transform the group.

His attempt to acquire regional television group Prime Media was torpedoed by dissenting shareholders Antony Catalano and Bruce Gordon and Seven has been left with a ‘strategic’ 14.9 per cent stake and none of the hoped-for merger benefits.

In Seven West’s favour it has a godfather in Kerry Stokes.

While he is the major shareholder in Seven West’s parent, Seven Group, Stokes would be viewed as a financial saviour if needed.

However, minority shareholders in Seven Group, which has been a stellar performer, would be unlikely to approve investing any more money in Seven West.

But Seven West lenders would sleep better at night knowing that Stokes has a strong passion for the media.

How much should you spend when buying a home?