British media group ITV Studios are in talks with Seven West Media about buying the in-house production business that makes Home and Away and My Kitchen Rules.

In a further sign that local content will be controlled by global players, ITV Studios, which produces shows including Love Island, Saturday Night Takeaway and The Graham Norton Show, have been in discussions with the media company about acquiring Seven Studios for several months, according to television sources who spoke on the condition of anonymity. 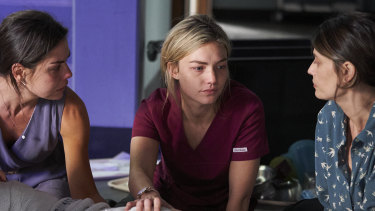 Home and Away is one of Seven’s best known formats and is popular in the UK.

Seven West Media chief executive James Warburton last week revealed the Kerry Stokes-controlled company had appointed investment bank Morgan Stanley to look at the business and set it up for a potential buyer or partner.

Seven is selling assets to improve its debt position at a time when earnings of free to air broadcasters are falling. Seven shares closed at 19¢ on Friday, a fall from 26¢ a share before the half year financial results were released.

ITV Studios have previously looked at the Australian market as a place to have a controlling interest. In 2014 ITV Studios looked at buying a strategic stake in Network Ten, which was eventually bought by US entertainment giant ViacomCBS in 2017.

Seven has previously been looked at by global businesses including Comcast, while Disney put its stamp on the Australian market last year when it launched its streaming service, Disney+.

Sources close to the discussions said the talks are about a range of potential ways to work together, but are not advanced. One option being looked at is a joint-venture with one of the businesses.

Mr Warburton confirmed last week he had been approached by potential buyers, but said no cheque had been put on the table. His priority is separating the production arm from Seven’s programming department.

Seven Studios is led by Therese Hegarty and has a number of international divisions, including Seven Studios UK and 7Beyond in the US. The operation creates local content for the television network, but also has deals with international streaming services.

Back to the Rafters, a spin off of local drama Packed to The Rafters, was commissioned for Amazon Prime last year and the business also produces Zumbo’s Just Desserts for Netflix. My Kitchen Rules is one of the biggest international cooking formats in the world, while Home and Away has series deals in place with the UK and New Zealand.

Revenue from productions and the sale of program formats for the half year was $53.2 million, while earnings before interest, tax, depreciation and amortisation was $24.7 million, Seven’s half year financial results disclosed.

JP Morgan analyst Eric Pan told The Sydney Morning Herald and The Age last week it could be smart for the company to sell.

“It is interesting they actually broke out expenses for Seven Studios for the first time,” Mr Pan said. “That could be a first step to potentially attract suitors”.

The production business is one of the more stable parts of Seven West Media, which owns West Australian Newspapers and magazine business, Pacific, which it is trying to sell to Bauer Media for $35 million.

Selling the business would help reduce Seven’s debt pile, which sits at $541.5 million according to its half year results. Seven chief executive James Warburton said all assets were on the table last week after the company downgraded its full year profit guidance, causing a 21 per cent fall to its share price.

Seven has also put a halt on children's programming production as part of an effort to generate an additional $20 million in cost savings. In the last few months the company has also spoken to a number of production houses, including ITV Studios and Endemol Shine, about oursourcing programming.

Earlier this month, Seven attempted to outsource new format Plate of Origin to Endemol Shine instead of producing it in-house, according to television sources. However they did not land an agreement, due to complications with Endemol Shine being the producer of Masterchef and Plate of Origin featuring Ten’s former Masterchef judges, Matt Preston and Gary Mehigan.