Seven West Media is threatening to halt production of children's content and is scrapping plans for any new Australian dramas amid a push from commercial television networks for the Morrison government to abandon local content quotas. 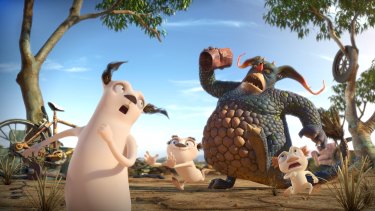 Bottersnikes and Gumble is one of a number of children’s programs on Seven.Credit:Channel Seven

Seven chief executive James Warburton told The Sydney Morning Herald and The Age the government needed to take "immediate action" and stop reviewing and delaying the quotas. The network will still meet its children's content requirements in 2020 but could be in breach from next year.

"We’ve been clear for a long time that the children’s content quota was not a sustainable one for us and the wider commercial television industry in Australia," Mr Warburton said. "The substantial cost in producing this content, which in some instances is watched by such a low number of viewers that it falls under ratings measurement thresholds, further handicaps us against unregulated, foreign digital platforms.

"We remain in compliance with children’s quotas but it is clear, and has been for some time, that we need immediate action not more reviews and delays."

Children's shows on Seven include Get Clever and Get Arty, which industry website TV Blackbox reported had not been renewed, as well as Kitty is not a Cat, Oh Yuck! and Larry the Wonderpup.

Television sources said the decision followed a meeting between broadcasters and Tony Burke, manager of opposition business, however those familiar with discussions stressed the timing was a coincidence and nothing to do with Seven's decision.

Communications Minister Paul Fletcher said he would meet with Mr Warburton to discuss the situation.

"There's a set of requirements that they face so they are fully aware of what those requirements are," Mr Fletcher said. "I'm aware of what the company has said but beyond that I look forward to the opportunity to discuss it at more length when I sit down with Mr Warburton. As part of the options paper that ACMA and Screen Australia are preparing, they are looking at a range of questions, including what are the content obligations on the free-to-air TV businesses and are they appropriate."

Last calendar year Seven produced almost 400 hours of children's programming, content which cost the network about $8 million. The average audience across most of the programs was under 1,000 viewers.

The separate decision to halt future dramatic content will not affect Home and Away, which is profitable for the network.

Free-to-air commercial broadcasters have been lobbying the government to change Australian and children's content quotas for years, arguing children are no longer watching the content on free to air television, using services like Netflix, YouTube and the recently launched Disney+.

Seven shares have been under pressure, falling by 5.6 per cent to a record low of 17¢ on Tuesday one week after its results. Rival Nine Entertainment Co, which is the owner of this masthead, reports results today.

In December 2017, the Australian government was handed The Australian and Children's Screen Content review, a report examining quotas which has still not been made public.  Free TV chief executive Bridget Fair said the existing quota rules made as much sense as "bringing back cathode ray televisions".

"Free TV has been warning that the children’s quotas system is unsustainable for more than a decade," Ms Fair said. "The original aim of the quotas was to contribute to children’s development. It goes without saying that if kids are not watching the [children and preschool] quota programs, we aren’t achieving that outcome. We urge the Government to act quickly to remove childrens’ quotas so we can focus on making content that people actually want to watch."

“The Government’s mishandling of the Australian and Children’s Screen Content Review is causing ongoing uncertainty for our commercial broadcasters and production sector," Ms Rowland said. "This process has been dragging on for almost three years, and still this third-term government doesn’t know what to do”.

Production lobby group Screen Producers Australia said it does not support a relaxing of children's content quotas, arguing there is a "critical" need for Australian stories to be told.

However, the group does support an extension of the regulatory scheme to include online streaming services. The organisation says broadcasters spend about 1.6 per cent of total programming on children's content. The ACMA declined to comment.