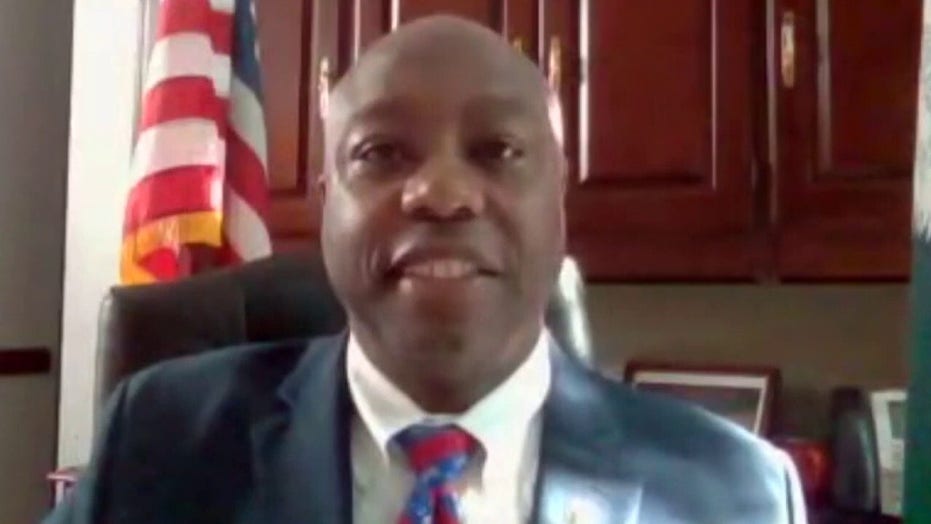 Sen. Tim Scott: US can’t tear down history for the sake of anarchy

Independence Day is a day familiar to us all. The streets are dressed in red, white and blue, and the sky serves as a canvas for an endless night of fireworks. We enjoy parades and time with loved ones – all while saluting our nation and our freedoms.

As we celebrate America’s 244th year as an independent nation, however, the face of our country looks different.

This year, we paused at the sound of an alarming pandemic that was sweeping the world. This pause gave a spotlight to injustices that our American brothers and sisters have been facing for generations.

JUDGE ANDREW NAPOLITANO: OUR DECLARATION OF INDEPENDENCE AND THE DECISION TO REVOLT AGAINST BRITAIN

America was founded on the principles of liberty and justice for all, yet for too many, these have seemed like lofty ideals rather than daily realities. As we grieve with those who are hurting –whether from the effects of injustice or this deadly virus – we have a unique opportunity to stop and reflect on the history of our nation and the path forward.

Four hundred years ago, a group of people seeking freedom set out for the New World; their hope was religious freedom. This voyage would later lead to the birth of the most powerful nation on Earth, the United States of America.

To obtain the freedom that they desired and that we enjoy now as Americans, there would be bloodshed, both domestically and internationally. More than 200,000 men and women served during the Revolutionary War in pursuit of liberty and justice. Since then, hundreds of thousands of our brave service members – and courageous citizens like Medgar Evers – have paid the ultimate price to ensure that we retain those core tenets of our beloved democracy.

Many things have threatened to destroy our nation and the principles for which it stands. The Civil War. Jim Crow. The attack on Pearl Harbor, “a date which will live in infamy.” 9/11.

Our nation is one of resiliency, and on this Fourth of July, I encourage all Americans to have hope – to reflect on how far we have come as a nation and to believe that we will continue moving forward together.

But no matter what we faced, we have overcome as a nation because of the resiliency and strength of the American people – because at the end of the day, we see that there is more that unites us than divides us. Whether it was an attack on our land or our ideals, we have united, though previously divided, to achieve justice. And it is those values that unite us that allow us to progress as a nation, a nation where we strive for justice and liberty for all.

Though there has been division in our country, together we strive to achieve a perfect union that matches the name of the land that we all call home – united.

Progress is rarely linear, and the United States is no exception. For so long, our nation has struggled with the concepts of progression and regression, viewing them as mutually exclusive. But it is not a binary choice; you do not have to only progress, or only regress. You can do both simultaneously.

Instead, while we recognize the struggles still facing our nation, we can also be grateful that the sacrifices of many over the past 200 years have brought us closer to a more perfect union today. In fact, much of our nation’s greatest progress occurred in the midst of pain. Just like President Lincoln and his Emancipation Proclamation or Dr. King and his ‘I Have a Dream’ speech, Americans today can use our nation’s struggles to unite against injustice and create lasting, positive change.

And this serves as a reminder and lesson for us all today. Though we have regressed due to a lethal pandemic, we are progressing to redefine what justice means in America. We are progressing to redefine what equality means, while understanding the pain that many Americans have silently endured since the birth of this nation. And even though our progression has been initiated by a deep-rooted pain, we will endure and overcome because that is the American way.

This is what we have been doing since this country was built – making progress out of what seemed like irreversible regression. Our nation is one of resiliency, and on this Fourth of July, I encourage all Americans to have hope – to reflect on how far we have come as a nation and to believe that we will continue moving forward together. To believe that the words in our Declaration of Independence will ring true for all who live on American soil.

This is the nation that has championed freedom, democracy and hope in the corners of the world; the nation whose founders bravely declared “that all men are created equal” and are “endowed by their Creator with certain unalienable Rights”; the nation whose citizens pooled their strength to fight for victory in two world wars. And it will be a nation that overcomes today’s challenges as well when we stand united.

NSA Chief Vows to Hit Back at Nations Interfering in U.S. Vote