(CNN)If you only tuned into the opening of Apple’s iPhone event this week, you might have wondered whether you were watching an emergency first responder training session.

Apple CEO Tim Cook kicked off the annual event on Wednesday with a three-minute video depicting how the Apple Watch has saved lives by calling for help. One man described how he was skating on a frozen river when the ice gave out. Another survived a plane crash in a remote area in the middle of winter. And a high school student escaped a bear encounter.
In another example, a 27-year old high school teacher who went to the emergency room after her Apple Watch detected an abnormally high heart rate. According to the teacher, “My doctor said, ‘It was your watch that saved your life.” 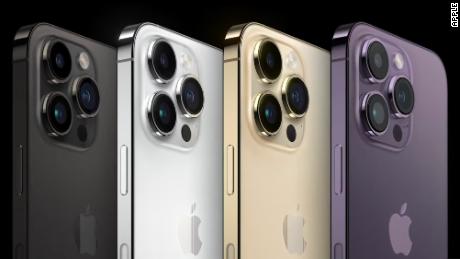 Apple has long presented its products as tools for creativity, productivity and a positive, if aspirational, lifestyle filled with friends and family, healthy habits and outdoor activities. Some of that was still on display at this year’s event, but there was a new messaging, too. The company positioned many of its products and features as safety nets in a shaky world.

Apple announced new car-crash detection technology on both the Apple Watch and iPhone which it says can determine the “precise moment of impact” using the device’s barometer, GPS and microphone. “We truly hope you never need it, but feel a little bit safer every time you get into a car,” said Ron Huang, Apple’s vice president of sensing and connectivity, during the announcement.

it also unveiled a groundbreaking Emergency SOS tool for iPhones that relies on satellites if, for example, you’re lost in the wilderness and cellular service isn’t working. And it introduced a new temperature monitoring tool on the Apple Watch that can be used to track illnesses, at a time when many may still be wrestling with pandemic health anxieties. 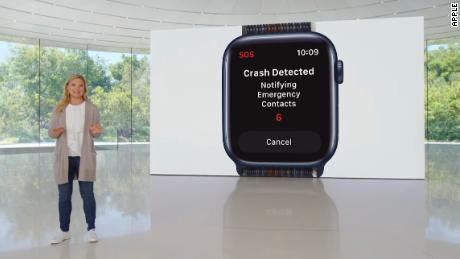 While arguably a continuation of Apple’s focus on health features, particularly with its smartwatches, the emphasis on these fearful use cases nonetheless raised some eyebrows among industry watchers. “It was a little surprising to see Apple reach for the alarmist approach and position their devices as potential life savers,” said Ramon Llamas, research director at market research firm IDC.

In recent years, Apple has promised customers that its products can help create a safer digital environment for them — one with stronger privacy protections and family-friendly content. Now it’s pitch appears to have expanded to keeping people safe in the real world.
“These emergency features are like the safety bags in your car: you aren’t going to need them all the time, but you’re grateful when you do,” Llamas said.
The shift in tone comes as Apple confronts a new economic landscape that could make it harder to convince customers to pay three- and four-figure amounts to upgrade their devices — especially when some of those products are not substantially different from the prior year.
The company introduced relatively minor updates to its devices across the board on Wednesday. The iPhone lineup, for example, offered updates to the camera systems, a new interactive lock screen and on the Pro models, much faster performance. Meanwhile, the new high-end Apple Watch Ultra is targeted toward extreme sports enthusiasts; while a market for rugged watches exists, not everyone needs tracking for deep ocean diving or triathlons.

“Refinement over revolution isn’t a bad thing but if purses are tightening with the economy then these announcements are a harder sell without anything groundbreaking,” said Eric Abbruzzese, a research director at market firm ABI Research.
The emphasis on health and safety could also help Apple bolster its subscription services business, Abbruzzese said, which has been one of its fastest-growing revenue lines in recent years. As he points out, the satellite connectivity is “only free for two years.” (Apple has not specified how much it costs after that.) Moreover, “advanced health tools seem like just another way to sell Fitness+ more strongly.”
Source: Read Full Article

The Indonesian navy says it found an unknown object with 'strong magnetic resonance' in search for its missing submarine, which has less than 24 hours of oxygen left

TikTok shares more of your data than any other app, and a study says it's not clear where it goes

Job diary: I'm a 'white hat' hacker. Here's what my job is like, and 5 things I think everyone should do to protect their personal information.