SCIENTISTS are incredibly using the winds on Mars to map out the first complete picture of how it was formed three billion years ago.

The team used instruments onboard NASA's InSight lander probe to install a seismometer to determine what lies below the surface of the red planet. 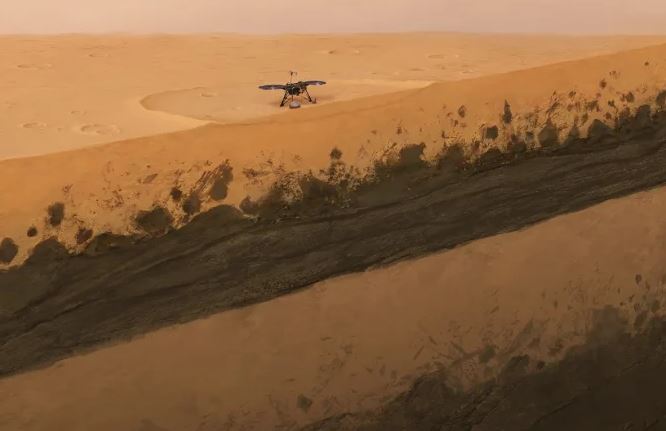 The Swiss Seismological Service (SED) and the Swiss Federal Institute of Technology in Zurich (ETH) have analyzed 'marsquakes' rippling through the planet since 2018.

After gaining an understanding of the makeup of Mars' core, its mantle and the thickness of its crust, they have now been able to go one step further.

The researchers have managed to glance below the planet's surface and into three billion years of history by listening to the sound of wind reverberating through the layers of soil and rock near the planet's equator.

The Swiss geophysicists used the lander's sensitive instruments to measure vibrations on the surface which ripple deep below.

Cedric Schmelzbach, of the Swiss Federal Institute of Technology in Zurich (ETH), explained: "We used a technique that was developed here on Earth to characterize places for earthquake risk and to study the subsurface structure."

He told Space.com: "The technique is based on ambient vibration.

"On Earth, you have the oceans, the winds, that make the ground shake all the time, and the shaking that you measure at a certain point has an imprint of the subsurface."

Based on the data they collected, the experts found the top three metres is made of sand, while the next 20 metres below the surface is loose material.

This is made up of volcanic rock which they discovered has been cracked by meteorite impacts.

Below this is lava flows, divided by sediments that formed when Mars experienced cold and dry conditions.

Schmelzbach added: "We're still working on how to interpret that and how to date how old this layer is.

"But it tells us that probably the geological history at that site is really more complicated than we originally thought and that probably more processes had happened in the past at that place."

The team found that the "resolution gets coarser the deeper we get," by delving underneath the red planet's craters and plains.

The revolutionary wind mapping technique has provided an extraordinary glimpse into Mars' evolution.

The geophysicists hope to use the lander's tools to delve deeper in the future and potentially probe the planet's crust.

"We have kind of a blind zone there at the moment," said Schmelzbach.

Earlier studies have suggested Mars' core, mantle and crust have striking differences, rather than mirroring each other.

Both planets had abundant oceans and rich atmospheres, until Mars losts its protective magnetic field.

The solar winds then slowly but surely stripped the red planet of its atmosphere,seeing it become the parched planet we know today.

Schmelzbach said this means Mars is much quieter than Earth and has a much weaker wind.

U.S.-China talks will be difficult, but reengagement is the right strategy, expert says