Australian mining giant Rio Tinto has launched action with a United Nations arbitration panel in the hope of ending a long-running dispute with the Mongolian government over taxes paid by its giant copper and gold mine in the Gobi Desert.

In a sign of further friction between Rio Tinto and the Mongolian government over the Oyu Tolgoi mine, the company on Friday said it had initiated a formal request with the UN Commission on International Trade Law relating to $US155 million ($234 million) in disputed taxes that Mongolia believes Rio's subsidiaries should have paid between 2013 and 2015. 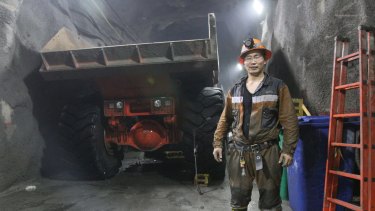 Rio Tinto’s Oyu Tolgoi mine is one of the world’s richest copper deposits. Credit:

"We have worked diligently with the government and tax office representatives in Mongolia to find a mutually acceptable settlement and came to the conclusion that arbitration is the best way forward to resolve this issue," said Arnaud Soirat, the global miner's chief executive of copper and diamonds.

Rio's $8 billion expansion of the giant underground mine in the nation's south has been beset by a series of delays and cost blowouts. In June, the ASX-listed miner issued a warning to investors the project could cost as much as $1.9 billion more than forecast.

The dispute will now be heard by a three-member arbitration panel run by the UN Commission on International Trade Law in London. Under the commission's rules, all parties agree that the award will be final and binding.

The Oyu Tolgoi in Mongolia's Gobi desert is the country's biggest source of foreign investment and provides thousands of jobs.

Earlier this month, Rio Tinto, which sends copper concentrate from the mine into China, warned customers of it was experiencing a slowdown in transporting deliveries across the border due to China's efforts to contain the outbreak of coronavirus epidemic that has now killed more than 2000 people.

Fears about the disruption caused by coronavirus in China, by far the world's biggest consumer of raw materials, have been rocking global commodities markets. As factories and shipping ports are locked down across the country, Australia's China-exposed resources companies have been in talks with customers to delay deliveries in the hope of avoiding "force majeure" declarations on contracts.