For Rio Tinto and its Pilbara peers, in 2019 most things that could go right did go right but they also deserve credit for taking advantage of the opportunity and then showering shareholders with the rewards of their discipline.

The Rio result reflects what might turn out, however – depending on how the coronavirus ultimately impacts the miners – to be the near-term high point in what has been a very positive cycle, one amplified by the hard focus on costs and productivity and an emphasis on value over volume by the big miners. 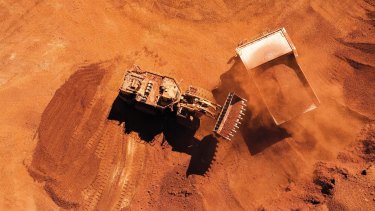 The driver of Rio Tinto’s result was its Pilbara iron ore business.Credit: Supplied.

For the full 2019 year Rio produced an 18 per cent increase in underlying earnings to $US10.4 billion ($15.8 billion), enabling it to declare $US6.2 billion of ordinary dividends while still maintaining an ultra-conservative balance sheet.

In the past four years Rio has returned $US36 billion of cash to shareholders, funded via a combination of asset sales and cash flows, but it has emerged with only $US3.65 billion of net debt.

The driver of the latest result was, as usual, iron ore, with that business contributing more than 80 per cent of the underlying earnings of the operating divisions.

Iron ore prices were buoyant last year, helped by the loss of Brazilian production after Vale had another tailings dam collapse and by China’s stimulatory efforts to offset the impact of Donald Trump’s trade war.

Rio did experience some production glitches, but they weren’t sufficiently material to dampen the impact of the higher prices. Indeed, to the extent that Rio did produce less than it planned, they helped tighten the supply side of the supply-demand equation and contributed to the higher prices.

A weaker Australian dollar didn’t hurt, given that the bulk of Rio’s cost base is in Australia but most of its revenues are US dollar-denominated.

It was those higher prices – really just iron ore prices, given the prices of copper and aluminum were lower – and the weaker Australian dollar that drove the result and which demonstrated its discipline.

Between them, prices and currency added nearly $US5 billion to Rio’s underlying earnings before interest, tax, depreciation and amortisation and that $US5 billion dropped virtually intact through to the iron ore business’ bottom line. We saw a similarly clean outcome from BHP where, as with Rio, production volumes were flat.

The start of 2020 isn’t, however, as auspicious for Rio and its Pilbara peers.

Cyclone Damien has already caused Rio to cut its iron ore production guidance from between 330 million and 343 million tonnes to a range of 324 million to 334 million tonnes. Rio appears to have been more severely impacted by the cyclone than BHP or Fortescue.

Of potentially greater significance, of course, is the coronavirus and what that might do to the Chinese economy and its steel production. China accounts for about 70 per cent of global iron ore demand.

A recent sharp build-up in China’s steel inventories suggests that steel production hasn’t yet been greatly affected – but that customer demand has dried up as the impact of the virus on Chinese factories and infrastructure investment has intensified.

So far the iron ore price, while it has softened, has held up. With large slabs of China’s economy paralysed by the virus and the effects spilling over into the global economy as global supply chains dry up and the footprint of the epidemic spreads, however, the ultimate effect on demand for raw materials is at this point unknowable.

If it is brought under control quickly there could be a surge in demand for raw materials – and their prices – as China’s industry seeks to make up for the lost output.

The risks are probably more to the downside at this point, however, even though China is now scrambling to re-open its factories – local governments are chartering planes and buses to return workers to work – and the central government is rolling out targeted stimulatory measures to minimise the economic damage.

It’s not just iron ore, of course, even though iron ore does dominate Rio’s earnings. Other commodities have also tumbled, with copper now trading more than 10 per cent below its average price last year and aluminum about 6 per cent below its 2019 average. Bloomberg’s commodity index is down about 9 per cent from its pre-virus levels.

To date, Rio doesn’t appear to have experienced any significant ill effects from the virus other than lower copper and aluminum prices and slightly lower iron ore prices, but clearly that could change as the duration and cost of the disruption to China’s economy becomes more transparent.

If the impact on demand for resource commodities is greater and more prolonged than Rio, BHP and Fortescue currently anticipate, however, their balance sheets and cost bases have improved so dramatically since their post-resources boom crises that they are in far stronger condition to weather a sharp contraction in demand than they would have been even a few years ago.