After four years of looking the other way and pretending not to read his tweets, a growing number of Republican senators are suddenly attempting to distance themselves from Donald Trump and rewrite history about their support for a president who, at least according to public polls, is likely headed for a big loss in next month’s election.

The epiphany some GOP senators are having just two weeks before Election Day may have less to do with their convictions and more about positioning themselves politically for a post-Trump world if the polls prove right and Joe Biden becomes president.

Sen. Ben Sasse (R-Neb.), an advocate of public decency who voted against Trump’s impeachment, offered the loudest critique of the president during a phone call with constituents last week. He said Trump has mishandled the coronavirus pandemic, curries favor with dictators, mistreats women, flirts with white supremacists and mocks evangelicals behind their backs.

The on-again, off-again Trump critic who has been discussed as a potential 2024 presidential candidate, warned of a “bloodbath” that could cost Republicans the Senate next year, adding, “that’s why I’ve never been on the Trump train.”

Sasse isn’t the only Republican who fears losing a Senate majority under a blowout Biden win. Vulnerable GOP incumbents have started speaking about that possibility in recent weeks and playing up their bipartisan credentials.

“The best check on a Biden presidency is for Republicans to have a majority in the Senate,” Sen. Thom Tillis (R-N.C.) said earlier this month in an interview with Politico. 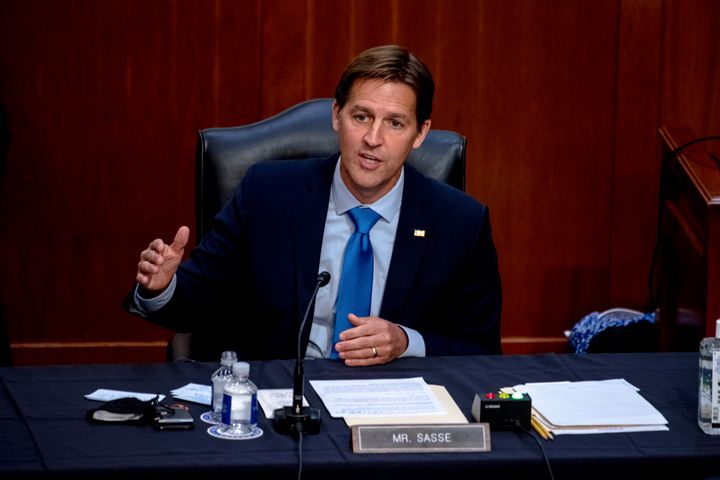 Sen. John Cornyn (R-Texas), who is also facing a tough reelection battle, told a Texas newspaper last week that he privately disagreed with Trump on issues such as spending, trade and his proposed wall along the U.S.-Mexico border. Yet Cornyn has been a steadfast supporter of Trump and his agenda in the Senate, voting twice in favor of repurposing funding for military construction projects to build the border wall.

Speaking with the editorial board of the Fort Worth Star-Telegram, Cornyn compared his relationship with Trump to a troubled marriage: “Maybe like a lot of women who get married and think they’re going to change their spouse, and that doesn’t usually work out very well.”

Even the notoriously reticent Senate Majority Leader Mitch McConnell (R-Ky.) has distanced himself from Trump in recent weeks. He stressed the importance of basic public health steps like mask-wearing, which Trump mocks, and criticized the White House over its lax coronavirus protocols.

More recently, McConnell has resisted Trump’s calls for a larger stimulus package in negotiations between top administration officials and House Speaker Nancy Pelosi (D-Calif.). The Senate this week will vote on a slimmed-down $500 billion package that is seen as a face-saving move for vulnerable GOP senators, far short of what Trump and Democrats have been discussing.

Trump responded to his GOP critics over the weekend, saying that Sasse has returned to his “stupid and obnoxious ways” and had been “nice” to him before winning renomination to his Senate seat in May.

At a rally in Nevada on Sunday, Trump said Republicans have to learn “to stick together.”

“We have some stupid people,” Trump said of the GOP. “It’s been this way for decades. I don’t know what the hell is in the blood. … They’re just a bunch of wimps.”

We want to know what you’re hearing on the ground from the candidates. If you get any interesting ― or suspicious! ― campaign mailers, robocalls or hear anything else you think we should know about, email us at [email protected].

Latest Posts
Walmart will offer tons of deals during Cyber Monday 2020 — here are the best live available know, plus everything else you need to know
The best Black Friday deals at Walmart: Save on Apple AirPods, Instant Pots, and more right now
For Black Friday, you can get 55% off the premium version of Grammarly, which checks your tone and even improves your writing style
State Pension contracted out: What does it mean to be contracted out of the State Pension?
Martin Lewis urges low income & Universal Credit claimants to look into up to £1,200 boost
Recent Posts
This website uses cookies to improve your user experience and to provide you with advertisements that are relevant to your interests. By continuing to browse the site you are agreeing to our use of cookies.Ok