Regional Express Airlines says it will ground all regular passenger services outside of Queensland in a fortnight unless state and federal governments cover the company's losses caused by the coronavirus pandemic.

The move would sever air transport links to some regional communities, with Regional Express (Rex) the only airline operating on most of its routes. 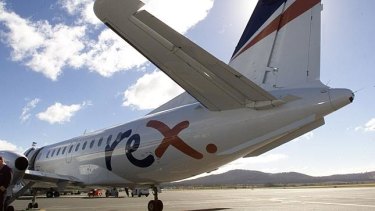 Regional Express said it would ground flights on April 6 unless governments step in to help. Credit:Photo: Andrew Taylor

The airline – which went into a trading halt on Monday morning – connects Sydney to Orange, Griffith, Broken Hill, Lismore, Parkes and Cooma and Melbourne to King Island and Mount Gambier, for instance.

Rex's deputy chairman John Sharp said the airline supported government measures restricting travel to contain the pandemic but those steps would cause passenger numbers to fall by about 80 per cent.

"There is a tipping point in the airline business beyond which it will no longer be sustainable to operate reduced services," Mr Sharp said.

The federal government last week announced a $715 million assistance package in the form of fee and levy waivers.

Mr Sharp said the United States had launched an airline rescue package which was the equivalent of 20 per cent of the industry's annual revenue. In Australia, that equates to $4.6 billion in assistance.

If government failed to render further assistance, Mr Sharp said that "we will see regional communities lose their air services for many months ahead".

"Even after this is all over, we are afraid that some of the more marginal communities will no longer have an air service", he said.

Rex would cease flying on April 6 unless government underwrote its losses. The airline's services will continue in Queensland, however, where they are underwritten by the state government.

Qantas and Virgin Australia have cut their domestic capacity by 60 and 50 per cent respectively, and are expected to make further reductions after the government warned against non-essential interstate travel, and South Australia and Western Australia joined the Northern Territory and Tasmania in effectively closing their borders.

Sources have said the federal government is considering whether to render more assistance to the aviation sector amid an unprecedented industry downturn.

Rex said it would continue to operate its Victorian air ambulance services, mining charter contracts and freight services even without government support.

Is Trump remaking the Republican Party or purging those who cross him?