The completion of NASCAR’s playoff race at Texas Motor Speedway was postponed for a third day on Tuesday night as rain continued in the Fort Worth area.

The Autotrader EchoPark Automotive 500 was suspended on Sunday after 52 of the scheduled 334 laps, with Clint Bowyer leading ahead of Jimmie Johnson, Erik Jones and championship contender Joey Logano. 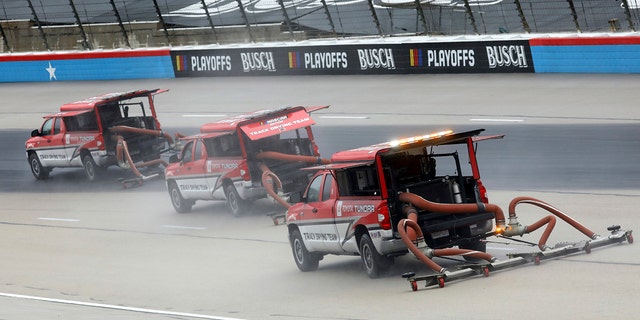 NASCAR will try to get the race restarted at 2 p.m. local time on Wednesday, about two hours after the precipitation is expected to let up.

The series is up against the clock, as it needs to move to Martinsville, Va., for the final race of the playoff’s round of eight before heading to Phoenix for the Nov. 8 finale.

Industry participants documented their boredom on social media: Ryan Blaney and Bubba Wallace played video games, spotters stuck in their rental cars used the horns to honk out “Jingle Bells,” and Joey Logano asked the track president if he could assist with the drying process.

“This is how crazy I am — I called Eddie Gossage and asked if there was anything I could do to help because I am that bored," Logano said. "That is a really risky move if you guys know Eddie. I am willing to do anything at this point.

“I tried to get him to open the go-kart track and let us go play with those.”